There have been a couple of standout sports moments for me in the last couple of weeks – not because I’m particularly interested in them, but because they seem notable in relation to one another.

Super Bowl post-game. Cam Newton. Yeah, a lot of people don’t like him. They see him as a showboat. I love watching him on the field smiling, dancing and having a good time. The reason I love it is because I see a guy who’s really loving life and what he’s doing. As we all know, he didn’t do much smiling on Super Bowl Sunday after his Panthers dropped a 24-10 loss to the Denver Broncos. More than for his poor performance on the field, he was criticized relentlessly for his post-game interview. Depending on who is describing him, he is a poor sport, classless and pouty or heartbroken, dejected and hurting. I’ve seen the footage and I definitely vote for the latter. I can’t even begin to understand how it would feel to devote every bit of my lifetime, my heart and soul to one thing, pour it into one single goal, get close to the finish line in my ultimate accomplishment and then fall short. And I particularly can’t understand what it’s like to have to talk about it to the entire world just minutes after it all fell apart. Yep, that would suck. He walked out of the press conference saying, “I don’t know what you want me to say, I’m sorry.”

I spoke to a former professional athlete that night and told him that it always drives me crazy that the most critical audience is the one that has always been in the stands. He agreed that his perception of athletes is very different from how fans perceive them. People who have never played sports at highly competitive levels can have no concept for what it’s really like. Having worked with a number of pro athletes throughout my social media career, I know that there are things about playing sports for a living that I will never truly understand. I respect that and I definitely believe that losing is one of them.

Hey, before I move on, remember That Time Peyton Manning Was A Bad Sport And Barely Anyone Cared? #justsaying

And I’m just going to put this here: 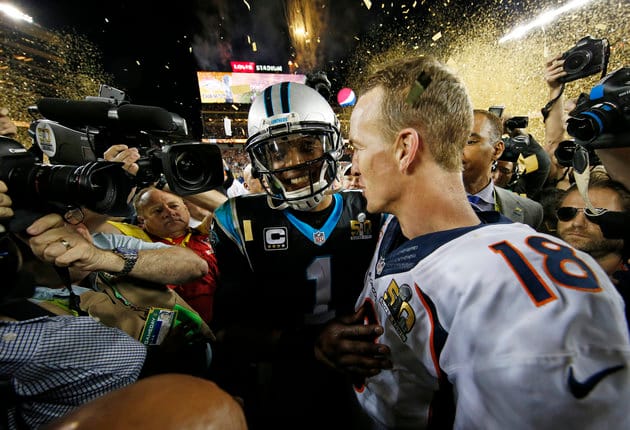 SANTA CLARA, CA – FEBRUARY 07: Cam Newton #1 of the Carolina Panthers talks with Peyton Manning #18 of the Denver Broncos after Super Bowl 50 at Levi’s Stadium on February 7, 2016 in Santa Clara, California. The Broncos defeated the Panthers 24-10. (Photo by Ezra Shaw/Getty Images)

Fast forward to less than ten days later on The Ellen Show when Ronda Rousey talked about losing her last title fight. Most notably, she admitted that after the loss, she had considered suicide. If you watch the video, it tears at your heart.

Her admission was, rightfully, met with great compassion and applause for speaking out about how it felt for her to lose, her mental health and how much of her identity had been attached to how well she performed in her job. She says something along the lines of “I’m nothing if I’m not this.” (Not an exact quote.) As another person who has devoted a significant amount of her life to one job, one goal, failure in that goal is understandably devastating.

So, here’s my question: what if we apply everything we said about Cam Newton in his post-game situation to Ronda Rousey in her suicide contemplation confession? Would we tell her she is a poor sport? Would she say that she needs to “man-up” and “learn how to lose”? Would we call her a sore loser? A pussy? Pouty baby? Classless? Obviously, the answer to all of those questions is no. So, why would we choose to treat them differently?

We’re still pretty fresh of this year’s Bell Let’s Talk day when social media users raised $6,295,764.75 for Canadian Mental Health initiatives. We virtually embraced people who shared their stories of heartache and loss, their experiences of struggle and triumph. We didn’t grade them on the gravity of their suffering or prioritize them based on the severity of their fight.

Skeptics of the event dismiss a single day’s attention and insist that mental health awareness needs to happen year round. They imply that “everyone” gives a shit on one day, but to really have an impact and erase the stigma of mental illness, we need to find a way to support those who are suffering every single day. I understand that argument, but I think every little bit helps as well. I believe that being aware, exercising our compassion and sharing kindness and love are ways that we can all get better.

Let’s never lose sight of the fact that every single person – from the baby born today to the prisoner on death row, from the janitor who cleans your office to the world’s top CEO – is a human being. Every single one of us is fallible, imperfect and every single one of us deserves respect and has the capacity for endless love. Every day, we encounter opportunities to walk that walk. I encourage everyone to take a minute to consider the human being at the focus of their actions and their criticism. None of us walk an easy road, despite what anyone thinks. We each have our own challenges and our personal tragedies. These are facts no matter the degree of our fame or the volume of our fortune. We are human, we struggle.

So, the next time you want to get online to rant about some other being, try imagining how it would feel if you saw the same coming back at you or, better, at your child, your partner or a close friend. You might find that it changes the way you look at things or your need to say it to the world in the first place.

Project: watch all the holiday movies

The unexpected side effects of using vintage dishes