Top Posts
23 for 2023: things we’ll do this year
What should I focus on on in 2023?...
Milk Fed
My Happiness Project: February
Be your own historian
Post-vacation blues
Bad habits
Home alone
What’s going on in your community?
Quick turnaround
Home TravelLas Vegas Vegas, Las Vegas
Las VegasTDTFYHTravel

If we’re connected on social media (and if we’re not, why not?) you probably know that we were recently in Vegas on a big old family vacation. Yep, five days with my entire immediate family and +1s made us a traveling pack of six. The basics were all arranged by my brother who fell in love with Sin City after his first trip there a couple of years ago. He surprised all of us with the travel details midway through last year and we’d been looking forward to the vacation ever since.

We departed on Sunday, February 7th aka Super Bowl Sunday. It’s not like that’s quite holiday status in our family, but it’s up there. Of course, this would be the year that one of us had a team appearing in the big showdown and that was my dad, the Carolina Panthers fan. Our arrival in Las Vegas was scheduled for just-in-time-to-miss-the-start-of-the-game o’clock so we had two options: 1. scramble to find a bar or other place to sit and watch the game or 2. get checked in as quickly as we could, hole up in one of our rooms and send scouts out for snacks and beverages. We opted for #2. Let’s not get into how the game played out and the widespread disappointment suffered by the family. Our first night in Vegas was largely dominated by that. We got out and explored our casino, grabbed some pizza and drinks after the game, but the day of travel got the best of us and we were all pretty wiped out. 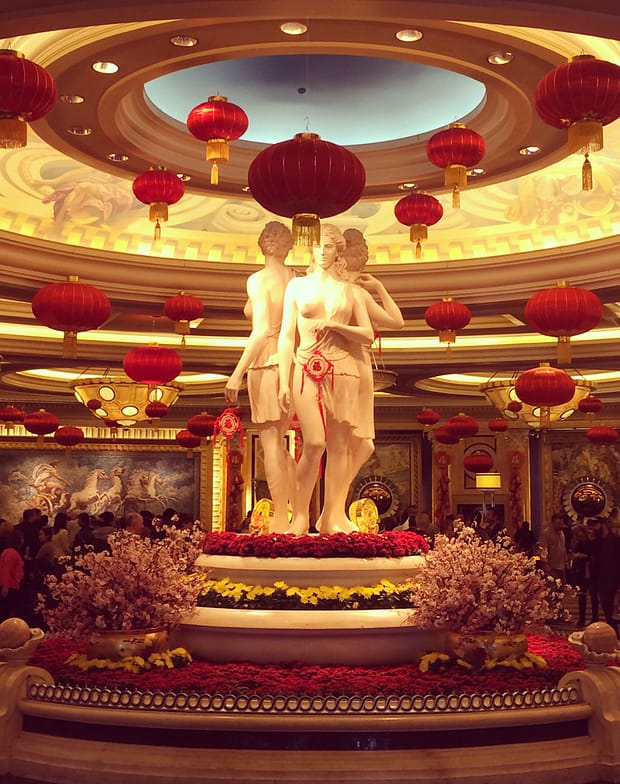 On Monday, we three girls headed to the Qua Baths & Spa at Caesars Palace for a day of relaxation. Complete with four luxurious pools, a steam room (my favourite), sauna, Arctic Ice Room (my second favourite) and beautiful relaxation room for loungey tea, fruit and water breaks, this is a new must for me every time I visit Vegas. Pro tip: bring along your own flip flops (the ones I was given to borrow were NOT comfortable), a good book and plan to be there for a while.

Once we met up with the guys later, we explored a few of the nearby hotels and made our way up to the Monte Carlo where we had dinner and hung around. We checked out the Minus 5 Bar (overpriced, but the boozers said the drinks were fantastic) and then eventually made our way back to our hotel. None of us are really heavy gamblers, but we can all spend some time in the casino or wandering through the other attractions.

On Tuesday, Kevin and I spent the majority of the day on our own doing a few of the things that we had on our Vegas Bucket List. This included the Big Apple Coaster at New York New York and the High Roller at The Linq. I introduced Kevin my old stomping grounds at the Aria Hotel (that’s where I go for the KronosWorks conference) and we took in many of the Chinese New Year – Year of the Monkey displays around town.

The weather in Vegas was really nice. It was warm enough that all the locals were raving about the temperature, but it was only warm in that spring sort of way that still has a tiny chill to it. Sunglasses were necessary, jackets were not.

That afternoon, we met up with everyone at the place I think my parents were most excited about for the entire trip – PF Chang’s. They had very fond recollections of enjoying their lettuce wraps and beef and broccoli dish in the times they’d been to Vegas in the past. Me, my PF Chang’s history is rich with memories of visiting Amy in Portland. We way over-ordered at our big round table, but the food was delicious and we packed up the leftovers and handed it off to someone in need on the street.

Fortunately for all of us, we had time to walk the meal off as we headed further up the Strip to Treasure Island where we were seeing Cirque du Soleil’s Mystere that night. My folks had never seen a Cirque show and I was excited to see what they thought. They, of course, loved it. Having seen others, I didn’t think it was the best, but I don’t think it’s possible for them to be bad. For the rest of the night, we split up and got together, split up and got together as we made our way the length of the strip back to the Luxor.

I was really happy that our group was well matched because nobody was really clingy and everyone had the freedom to do their thing without having to appease the others. We were all able to break off into pairs and do our own thing without anyone getting their nose out of joint. With so much to do at all times, Vegas definitely makes it easier for groups like ours to mix and mingle throughout their stay.

Wednesday was the big day and the biggest event of our trip – we took a helicopter ride to the Grand Canyon! We’d booked ahead through Viator and they’d set us up with a four-hour sightseeing tour through Mustang Helicopters. The tour took us to the West Rim of the canyon where we landed to enjoy some leisurely champagne, snacks and picture taking.

If you enjoy flying (which I do) the chance to get in a helicopter is one you won’t want to turn away from. I was lucky that the first time I was ever in a helicopter, it was flown by my amazing friend Rachael who gave me an aerial tour of Austin, Texas. I was pumped to get back into a chopper and because of the size of our group, we got one all to ourselves! (If you don’t enjoy flying – like my brother – it’s a good idea to sit in one of the inner seats of the helicopter. Apparently, there is less jiggling and vibration there.)

There is something about the desert that I just love. Seeing it from above was even more exciting.

We were picked up from our hotel and delivered to the airport in Henderson. From there we flew out over Lake Mead with a quick circle around the Hoover Dam. It took about 45 minutes to get all the way out to the Grand Canyon and it was beautiful! As we flew over the crest of the canyon, the scenery just opened up in front of us. There aren’t words to express how incredible the view really is. It was awesome.

I think everyone would agree that the Grand Canyon and/or helicopter were the high point of the trip, though there were many good times and fun things.

Once our bus dropped us back off at the hotel, we all went out to do the things we wanted to get done before we left the next afternoon. For the two of us, that meant a great Mexican meal at Tacos & Tequila, exploring the only hotel we hadn’t already seen, buying socks of all things and big, colourful, frozen drinks!

Let me take a moment here to mention that flying out of Abbotsford Airport is a very viable option if you live in the Lower Mainland. Leaving Port Moody at around 8am, it only took us thirty minutes to get there. There were few people there so line-ups weren’t a concern and all amenities were at our fingertips with a snack bar and magazine shop on-site. Also, parking is $9 per day which could be a dealbreaker depending on how long you’re gone.

If you’re planning a visit to Vegas, be careful. That whole ” what happens in Vegas stays in Vegas” promise does not extend to everything, evidently. (Thanks for sharing, Barb.)

If you’re a Vegas regular, let me know your favourite spots!