I know, I know. When we got engaged, I swore that I wouldn’t turn into an obsessed bride. Let’s be real, people who talk about one thing and one thing only are boring. But people who are planning a wedding who talk only about planning their wedding? They’re the worst.

I don’t plan on talking about our wedding a lot, but I’ll be honest, I don’t really know where to start. I have zero wedding fantasies. I never dreamed of getting married. In fact, I realize now that I have probably never even thought about my wedding day before now. Truth is, Kevin has more expectations for our wedding than I do. I’m a blank matrimonial slate. 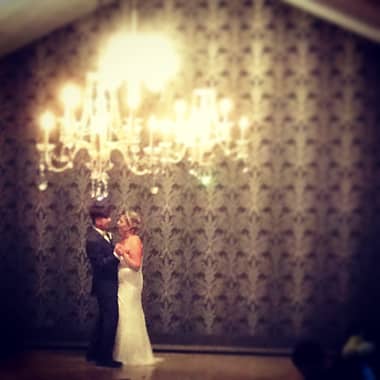 This is a scene from my favourite wedding

When it comes to decision making, I have my own ideas, but I like to factor in the experience and advice of others. I usually ask around before making a choice, but I can’t say I always follow the guidance I receive. I like having conversations around the decisions to be made and then I draw my own conclusions. I suspect it will be no different with the what seems like a million decisions that we’ll be making over the coming months.

My wedding crowdsourcing began shortly after we announced our engagement. I asked nearly everyone who congratulated us two questions:

I’m going to move away from that for one short paragraph to share one of the most delightful discoveries I made after we got engaged: weddings make people really happy. Like, really happy. Women get all gushy, men need to tell you all about how they proposed. It’s sweet, really. And something I never expected.

So, as I started to ask around, one piece of advice seemed to be more common than any other. That advice was to start with a date.

That seemed reasonable. So, I asked around.

Please share! I want to hear how you picked your #wedding date! Decisions, decisions… pic.twitter.com/FeCnKLOl3i

Here were some of the responses:

@carlyrigby Picked a weeknight before a stat holiday. So a Wednesday before July 1st. Was easy to get anything booked/last minute.

@carlyrigby looked at a calendar and found a date after Spring semester finals but before Summer semester started.

@carlyrigby the last Saturday in May. my brides brother played in the CFL and had to go to training camp for June. we wanted a June wedding

@carlyrigby it was exactly one year after we started dating. And my dad/step mom were going to be here.

@carlyrigby we decided how long we wanted to plan vs. what season we wanted and then just picked mid month.

Before we could really get down to the business of picking our own date, we had one major thing to resolve: where (geographically) would we wed? At first, we talked about a destination wedding, but we soon realized that there was no realistic destination – we’re not exactly beach people and it’s unlikely that anyone other than one aunt would appreciate my suggestion of Chicago. (Her response when I joked about it was, with a laugh, “I’ve never been there so I fully support that decision!”) We thought about getting married near where Kevin is from and, to be truthful, while he is somewhat indifferent to it, I haven’t entirely ruled that out yet. Without getting too far ahead of ourselves, when we consider our guest list, he has many more people on his side than I have on mine. I suspect I’ll be quite stingy with my invitation list because if I’ve learned one thing about myself since we got engaged, it’s that I feel a certain degree of intimacy is required if you are going to witness me getting married. But, I’m sure I’ll talk about that a little later on.

As it stands, we are loosely committed to getting married in BC. I’d love to do a seriously local theme, but, again, all tentative at the moment.

If it was up to me, I’d plan a wedding on a Thursday in the middle of a winter month, but Kevin thinks that a midweek wedding is weird and he vetoed the two months I’d originally suggested: my favourites, February and November.

One big consideration for both of us: out of town guests. Invitations will be sent far and wide to friends and family all over Canada and the US. Since many of those guests are important to one or both of us, I feel like we need to consider travel planning in our date selection. A long weekend could be a viable option. Fortunately, the west coast is a nice destination at almost any time of year so at least we’re not sticking travelers with an unappealing destination.

I’ve been well-versed in the “just do what feels right for us” advice (that’s probably the second most common piece I’ve received) and I’m fully comfortable with the idea that we can’t/won’t please everyone.

We leaned towards fall because the heat of a summer wedding is very unappealing. Autumn in BC is really beautiful and the weather is usually sunny and warm long into October. Fall colours are nice and Thanksgiving (in Canada – we don’t actually call it Canadian Thanksgiving ;)) is the second Monday of the month. A date over that long weekend lends itself nicely to a theme of gratitude and y’all already know that’s a big thing for me. If we refer back to Amy‘s Twitter recommendation of using math, we could reasonably jump on 10 + 7 = 17, a Saturday (so that it isn’t weird for my groom.)

So, that’s the way we’re leaning: October 7th, 2017. Not written in stone, but it’s the date we’re working with for now.

Still, I want to hear your thoughts!

When did you get married? How did you pick the date? As a groom, bride, attendant or guest, what are some great wedding dates you’ve been a part of it? Do you have any examples of bad ones??

And, if you’re interested, when I turned to modern day wedding authourity, The Knot, here’s what they had to say.

First, I want you to know that I was in the middle of writing a blog post when my email rang and I immediately jumped over to see what you had come up with, I am THAT excited for you. Second, I love that you are talking about it, I’ve been waiting for you to do so. 😉 And third, I think picking a date is SUPER personal, which is why I also suggest to take your time and just do what you want. 🙂

Bah! I feel so honored to be your ‘favourite’ wedding! Toot!

I’m excited for whatever date you guys end up with, but seeing as how i’m the authority on smart dates, go with my gut. 🙂 Destination wise, do what’s easiest for you guys, and fuck everyone else. Honestly. When you start catering to others needs, you will end up being unhappy and stressed and that is not what any of it should be. Do YOU. Don’t conform to societal norms or beliefs, things don’t have to be traditional (although mostly you’re no where near traditional). Make it special for the both of you, have a good time. I applaud your decision to keep it intimate. You should. If I could do it over, I would have made the wedding a more intimate affair and had most of the people at the reception. Although, I realize with a destination wedding, that’s hard to do. Hit me up for ideas anytime!