Top Posts
23 for 2023: things we’ll do this year
What should I focus on on in 2023?...
Milk Fed
My Happiness Project: February
Be your own historian
Post-vacation blues
Bad habits
Home alone
What’s going on in your community?
Quick turnaround
Home TDTFYH July in review

High: we went on vacation.

Low: we were put on balcony lockdown for 12 days which made for 31 degree nights inside our apartment. (That’s 88 degrees for those of you playing along in America.)

Good: we explored a local park that we’d wanted to visit for years. We harvested potatoes, tomatoes, onions, peas and cut sweet peas and hibiscus flowers.

Not so good: I realized that the one downside of Snapchat is that if you aren’t diligent about downloading your snaps, you lose a lot of your history. (Unless you stop to take pics in several different apps every time. In which case you’re both smart and nuts.)

Our week long west coast road trip was easily the highlight of the month (duh!) so here are a few of the details which added up to why. 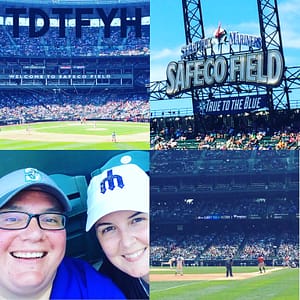 We went to two Mariners games at Safeco Field in Seattle. For the first, we sat in the second row and Kevin was convinced I was going to be “just like Drew Barrymore in Fever Pitch.” The Mariners lost 8-1. In the second game, the Mariners came back from a 0-3 deficit in the bottom of the ninth to win 4-3 with a walk off homerun.

In between baseball games, we spent our time exploring a few notable Seattle grunge landmarks including the Sound Garden, Kurt Cobain’s house and the Black (Hole) Sun sculpture for which the song was named.

I’m not super fond of Seattle, but this trip was really enjoyable since it allowed us to see a few new neighbourhoods and we definitely picked up a different vibe than we ever had before.

Ballpark food: Seek out the crab sandwich, clam chowder (get the bread bowl!). Steer clear of the veggie dogs and coffee.

Tourist highlight: I thought the Sound Garden was fantastic. Despite it being a blustery kind of day, I could have sat there for much longer just looking out at the water and listening to the wind-generated sounds. It felt really zen to me. (Do your homework if you want to go check it out. It’s tricky to find and you need to go through security on the NOAA campus where it resides.)

We basically chose Centralia because we needed a place to visit between being in Seattle and heading to Long Beach. That there was a McMenamins hotel there certainly helped. I’ve been a big fan of McMenamins properties/locations/beers (back in the day) for years, but Kevin had only been to one of their restaurants and enjoyed a single growler of their beer.

Centralia is a super cute little town. We enjoyed strolling up and down their main street and around the train station. We weren’t there for a full 24 hours, but I would definitely return for some antique shopping in the future.

Small town diner: At the recommendation of the Centralia Downtown Association, we crossed the street and ate breakfast at Centerville Cafe. It was exactly what you’d expect from a diner in a town like Centralia and it was delicious.

Entertainment: If you’re staying at Olympic Club, there is plenty to do in the properties below the hotel. There’s a restaurant, a cafe, a games room and a makeshift theater populated with loveseats, cushioned chairs and antique tables for offerings from the full restaurant menu and bar service. We watched the ending of Warcraft (again) and some X-men film or another.

I loved Long Beach. Every little thing about it. The thought of just being at the beach was super appealing to me from the minute the plan was made, but it was also the meeting point between the two of us, one of my favourite friends, her husband and daughters. Beach bonfires, s’mores, mini-road trips, deep-fried oysters, EO bath products, borrowed beach cruisers, pizza, friends, love, perfection.

Landmark: Massive cast iron frying pan, the world’s second largest. It falls 5 feet short of the one in Brandon, Iowa.

Weird phenomenon: Marsh’s Free Museum: Jake the Alligator Man, a two-headed cow, vintage machines that’ll tell your fortune, measure your strength or test your love quotient, a unique mix of interesting things (exotic seashells and crystals) and total junk (oinking plastic pigs and plastic whale tail necklaces with some, but not all 🙁 names on them)

I could say I’ve been to Portland a million times and, though it feels true, it’s actually a lie. I’ve probably been there twenty times and about seventeen of them were to see Amy. Strangely, this time we didn’t see her there, but having spent the previous two days with her and her family took some of the sting out of that. Nope, the two nights that we spent in PDX were focused solely on spending time with some other dear friends instead. We were schooled in Big Brother, reminisced about the King of Queens and I pulled the closest thing that I have to an all-nighter in years just getting lost in talking and catching up.

Shopping excursions: With no sales tax and US prices, Oregon is sometimes a good place to shop. Our destinations: Powell’s Books, World Market, Target, Foot Traffic (this one was more about our shoe salesman…) and we also searched high and low for a Ducks shirt for Kevin, but, alas, we never found one.

McMenamins passports: We found out a few days too late to take advantage of it in Centralia, but McMenamins has this fantastic rewards program for frequent guests. You pay $25 for a passport and then carry it around to all their locations, getting stamps from the places specified on the page and redeeming them for great prizes. We collected nine stamps at Kennedy School our brunch stop on our way out of town and we turned them in for a water bottle (Kevin) and a McMenamins pint glass and bottle opener keychain (me.) The real reward, though, was the absolute blast that we had doing it. Our stop there cost us about three hours on our long drive home, but it was worth every minute and the fun we had softened the blow of pointing the car homeward after such an awesome week.

What were your July highlights? What adventures did you take? What wonderful things did you do?

Things we’ll do this month: August

Love. Love.
Love. This post.
We had such a great time with you guys. Can’t wait to do it again.
Oh. And the wifi rating is an excellent touch!