Top Posts
23 for 2023: things we’ll do this year
What should I focus on on in 2023?...
Milk Fed
My Happiness Project: February
Be your own historian
Post-vacation blues
Bad habits
Home alone
What’s going on in your community?
Quick turnaround
Home TDTFYH Walking Vancouver: Deer Lake Park

A few weeks before we went on vacation, I was out at a bookstore and had a brilliant idea: I would take home this book I’d picked up and it would change our lives. Wait, isn’t that the reason we buy every book or every thing for that matter? Because we believe it will change our lives? Right, well, this one actually has that power in many ways. 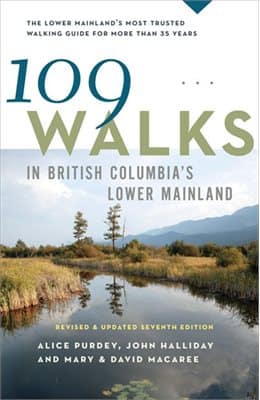 I know that I don’t have to tell you the benefits of walking, but I love the fresh air, new scenery and elevated heart rate. Exploring new areas feels like a new adventure and probably the closest thing to traveling you can do while staying home.

I bought the book, took it home, gave it to Kevin. We agreed that each week we’d alternate picking out a different trail destination and then go and check it out. Since I was out of commission at the time and then we were away, we finally got started last week. I gave him first choice and he went for something nice and easy, relatively quick and in our general neighbourhood: Deer Lake Park. We’d actually talked about checking out the trails there on a few occasions, but this was the first time we’d actually set aside time to do it.

But first…breakfast. Because no good day starts without it.

We’d been out at Urban Digs the day before and I couldn’t resist the apricots they had at the farm stand. I picked out two not having a clue what I’d do with them. Until, that is, the woman working there told me about how she fries hers in her cast iron pan. She got my attention and I left in great anticipation of the next morning and being able to try it myself. Since I knew we couldn’t just have them on their own, I paired them up with oatmeal and added some local hazelnuts into the pot while I was cooking that.

If you want to try frying apricots, it’s simple. Here’s how: in your cast iron pan, place them face down and let them cook until they start to get dark and crispy. Flip them over and sprinkle a little bit of brown sugar inside the indent where the pit used to be. It’s heaven.

So, when we were done, we hit the road and made our way to the Royal Oak parking lot and entrance to Deer Lake Park. From there, it’s a short walk to connect to the many trails that seem laid out as variations of the same general loop.

Once we connected to the trail, we turned right and continue along some fields that are apparently remnants from a farm formerly operated by Oakalla prisoners on the left and noticed the model airplane landing strip on the right. Once through that meadow, we climbed a hill that eventually led to a raised viewpoint constructed of grated metal. We climbed to the top only to discover that it was overgrown with surrounding trees completely blocking the view in all directions. We continued on our way.

Once away from the viewpoint, we took the trail up to the high point of the trail and eventually got a glimpse of what we might have seen from the viewpoint: our first look at the lake itself as well as the mountains in the background. It was a sunny and warm day, but the clouds had yet to burn off at this point.

Tall grass lined the edges on either side of the packed gravel of this southernmost trail in the park. We commented that it was surprising that we’d seen but one other pedestrian along this part of the walk and even wondered if we’d taken a wrong turn.

Soon, the scenery changed and we were in the shade of some trees as the path cut down the hill to connect with the more popular trails that are closer to the lake. Once connected to them, we took another right and were exposed to a marshier terrain than the fields we’d just been through.

Further along, we entered a more thickly forested area where boardwalks had been built. These continued on for a few minutes before our path took us onto a dead end city street that serves as a laneway to several houses on both sides.

After returning to the path from the road, we could see that we were approaching the boathouse that offers rentals of paddleboats, kayaks and canoes for what I thought were pretty reasonable prices. (The only one I remember is a 2-person paddleboat for $17 per hour.) Across from the boathouse was a small wharf where people were embarking and disembarking on/from their watery adventures.

The next building housed public washrooms, water fountains and looked like it could also be the home of a snack bar, though if it was, it wasn’t open at the time. These facilities were located next to the “beach” where there were four or five park benches, about a hundred Canada Geese and a view of Metrotown that served as a great reminder of how we don’t have to go far to escape into nature.

Past the beach and through a grassy area with picnic tables, the trail started to loop back towards where we’d come. We were now on the north side of the lake and found that the majority of the trails were on raised boardwalks like we’d seen for a short period earlier. The boardwalks led us much closer to the marshland where we saw a totally different type of greenery than we had in the grass and fields on the south side.

The north side led us around the grounds and wedding canopy at Hart House, along a roadway and over and around some creeks. Eventually, we passed between the lake and the Festival Lawn where outdoor concerts like Weezer and the Lumineers took place earlier this year and looked up at that back of the big stage. In this areas, there were black fabric barricades lining the boardwalk to prevent people from getting a free show by watching the backside, but in the light of day, we could get a good look at the empty venue.

At one point, the trail leads away from the lake to veer around a piece of private property. Within minutes we were back on the path and the lake was back within view.

After winding through what could only be described as fields of lily pads, the boardwalks began to be surrounded by more of what we’d seen at first – tall grasses and yellow toned plants.

When we met up with our original path, we opted to head southwest and uphill again to come down the back of the park, and along Royal Oak to the car. Along this path, we found blackberry bushes that were ripe for the picking and an apple tree with a few pieces of low hanging fruit. I’ll admit that I took advantage of both. 🙂

Our book indicated that the trail was 7km and would take 2.5 hours. Though I think we veered a little from their recommendations, ours ended up measuring 6.5 km. We dawdled along the way, but it still only took us one hour and forty minutes.

The trails were nice and well kept. Though there were a few stairs, it could be tailored to be relatively (or probably entirely) flat. The boardwalks were all grated so even in the rain, they’d be safe to walk on. Overall, this walk was easy and one that we talked about doing after work in the summer because we figured we could do a straight loop of the lake in an hour or less.

If you ever think about visiting Deer Lake Park, here’s a map of all the trails.

What’s your favourite walk or hike in the Lower Mainland?

[…] This is our newly adopted summer adventure: every week, we are exploring a different park,trail, hike or walk someplace around the Lower Mainland and using 109 Walks as a guidebook. Read up on week one, when we went to Deer Lake Park in Burnaby. […]

[…] a hike in a new Lower Mainland location each weekend. Here’s where we have visited so far: Deer Lake in Burnaby, Watershed Park to Mud Bay Park in Delta/Surrey and Steveston Greenways in […]