Top Posts
23 for 2023: things we’ll do this year
What should I focus on on in 2023?...
Milk Fed
My Happiness Project: February
Be your own historian
Post-vacation blues
Bad habits
Home alone
What’s going on in your community?
Quick turnaround
Home TDTFYH Walking Vancouver: Watershed Park to Mud Bay Park

This is our newly adopted summer adventure: every week, we are exploring a different park,trail, hike or walk someplace around the Lower Mainland and using 109 Walks as a guidebook. Read up on week one, when we went to Deer Lake Park in Burnaby.

For week two and my first turn to make a selection, I chose the walk from Watershed Park in Delta to Mud Bay Park in Surrey. I wasn’t familiar with either the beginning or the end so this seemed like a real adventure to me. When the book said, “If you like both forest and shoreline, this walk is for you,” I knew this walk was, well, for me. 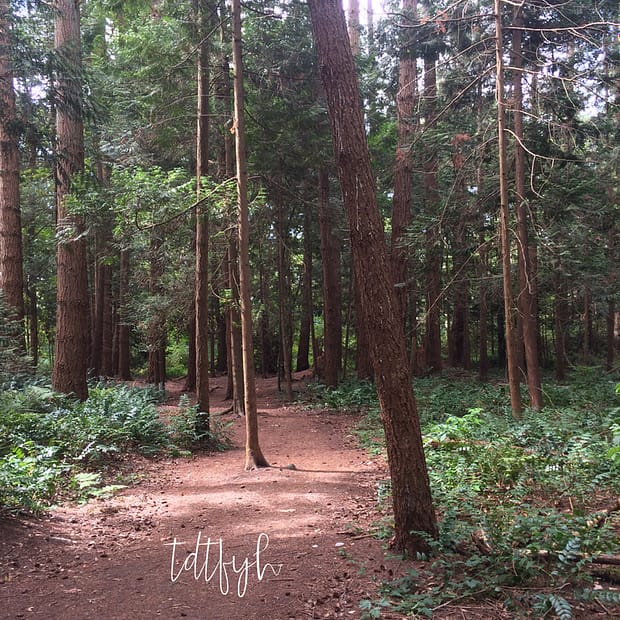 We rolled up to the park via Kittson Parkway and found parking pretty easily. When we checked the park out on the board, I noticed little maps of the park in a baggie pinned to the frame. I thought this was a nice touch and we referred back to it a few times throughout the day.

The hike begins in Watershed Park which is a wooded area with a network of trails that meandered throughout it. We took the Low Trail straight through the park and that was pretty easy to follow because it is wide, well-trod and always obvious. It is quite beautiful and parts of the trail we took gave me an old country feel. Lush and green, it is very typical of a west coast walk.

The Low Trail in Watershed Park is easygoing and smooth. There are very few inclines and it would be welcoming to a stroller or someone who was a little unsteady on their feet.

We traversed Watershed Park in less than half an hour – by my measurement, it was just over 2km from one side to the other. From the exit on the other side, we took a short stretch of road that went under Highway 10 and connected us to a walkway that led us between some brush and some pastures. When this pathway ended, we took a right turn into what I thought was the most picturesque part of the walk, a fenced straightaway through marshland that connected us to Colebrook Road on the other side.

We followed the road for two kilometres with farmland on one side, fields buffering highway on the other and a remarkable number of cars sitting parked on the side who then hightail it when they see pedestrians coming. (I don’t even want to know.)

The walk is on the, in some places rather narrow, shoulder of the road here, but I give props to the city of Surrey because they’ve a fantastic job of putting up markers at frequent enough intervals that you’ll see one right around the time you’d probably start to wonder if you were in the right place – just one tiny step ahead.

The road winds along until it turns into another. Both were lined with perfectly ripe blackberries so I foraged while Kevin walked ahead of me. Eventually, we turned right, crossed some railroad tracks and found the sign at the entrance to the park.

The driveway into the park is quite long so when you think you’re there, you actually still have a little ways to go. Once we’d arrived, I realized that shoreline was the correct descriptor since beach wouldn’t have been appropriate. It’s a little bay of mud. There is evidence of water, but nothing more than puddles to be seen. Just mud as far as the eyes could see. (Even Kevin’s! – my vision is terrible.)

Mud Bay Park is a hotspot for bird watchers particularly during migration season. It’s calm and peaceful place with fields and raised dykes that allowed for views across the water as far as Tsawwassen and Point Roberts. Here, we picked a park bench with a view of the water and took a break to eat our lunch.

Mud Bay Park offers its own trail system that measures about three kilometres, but we continued around after our pit stop and then cut back on a trail that shortened our loop.

Our return trip was a backtrack of all the places we’d already walked through, though we each decided to take a different route once we were back into Watershed Park. I cut up to The Meadow and onto the higher Pinewood Trail while Kevin went to the actual Watershed. Somehow we both managed to hit the very nice and refreshing drinking water station (kudos, Delta!) and finish up on the same path to the car. The lesson we learned in our exploration was that the other, higher trails in the park can be killers – lots of severely uphill battles to get up there, but they’re pretty nice when you do. Also, that’s where they keep the water. 😉

We shared our walk with other casual walkers, runners, mountain bikers and even horses. That traffic dropped off once we headed towards the roadside portion of the trip and, in fact, we never saw anyone on foot again until we were in Mud Bay Park.

The book suggested that this walk was 14km and that we should allow four hours. Even with our modifications, I measured 13.9km (Kevin was over 14) in three hours. (That didn’t include our break for lunch.) I enjoyed this walk very much especially because we went through all different kinds of scenery and topography. It’s a great way to spend a sunny morning or afternoon!

What do you always keep in your pocket, purse or pack when out hiking?

My ‘slightly strange item’ to have with me while hiking: throat lozenges. My throat inevitably gets very, very dry (heavy breathing, talking, altitude) and these are perfect.

That is a fantastic suggestion, Allison! You knocked that out of the park!

[…] This is our newly adopted summer adventure: every week, we are exploring a different park,trail, hike or walk someplace around the Lower Mainland and using 109 Walks as a guidebook. In week one, we went to Deer Lake Park in Burnaby then in week two, we visited Watershed and Mud Bay Parks in Delta and Surrey, respectively. […]