This is our newly adopted summer adventure: every week, we are exploring a different park,trail, hike or walk someplace around the Lower Mainland and using 109 Walks as a guidebook. In week one, we went to Deer Lake Park in Burnaby then in week two, we visited Watershed and Mud Bay Parks in Delta and Surrey, respectively.

For as long as we’ve been dating, Kevin and I have always enjoyed spending time in the Ladner and Richmond area so it really wasn’t a surprise to me that Steveston would be one of his early choices. Since he was busy playing lacrosse all day Saturday, we delayed our outing until Sunday instead. Knowing how busy it can get in the historic fishing village, we set out early(-ish) to beat the traffic (and the heat.) 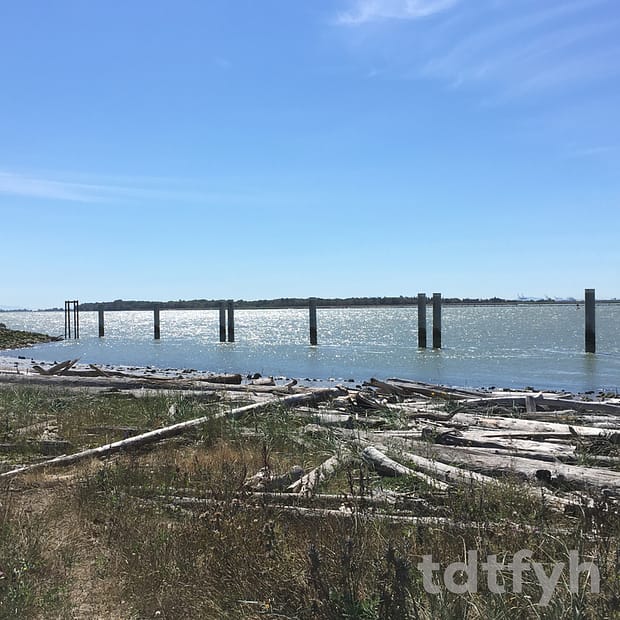 If you take Steveston Highway all the way past Seventh Avenue, you’ll find about six parking spots right beside the dyke that leads south to Garry Point Park and later, the Steveston everyone is familiar with – the cute little restaurants, docks and mom and pop shops. We climbed the ridge that was just high enough to hide the view behind it and hopped onto the trail. The scene there is tall grass as far as the eye can see, until that sailboats in the distance give away the fact that water is hiding behind. The trail is packed gravel, wide and steady for walkers and cyclists alike. The view of the grassy fields on one-side is countered by the houses and yards on the other. A marshy moat is the only thing separating the public from the private.

Eventually, the trail opens up to Garry Point Park which offers its own network of trails and a much more distinguishable view of the Fraser River. Here, if you follow the trails out towards the water, you can get access to a couple of small beaches (though not for swimming – the current is too dangerous) and enjoy a cool breeze. We wound our way through the kite flyers and bike riders around the shoreline of the park until we entered the territory we were familiar with from our prior trips to Steveston.

If you’ve never been to Steveston, it’s adorable and it’s obvious why tourists flock here. The marina is crowded with fishermen selling freshly caught seafood right off their boats and the surrounding buildings offer great vantage points to take in all the action. Steveston was built on salmon fishing and, more accurately, salmon canning, home to at least forty-five canneries in 1890. One hundred years later, they’d all be shut down.

Much of the history of the village has been preserved and it’s an enjoyable walk of its own. Our path took us through the village, but we didn’t stop to look around much.

We carried on along the top of the wharf and through town until we connected with a further waterfront that looks newly built or recently refurbished. On the right was the river again, on the left, new townhomes and apartments built in such a style that they gave off a real beach resort town vibe.

After winding along the path, we eventually came to Britannia Shipyards Historic Site where a number of buildings are maintained and open for public exploration. This portion of the walkway took us over wood planks and gave us a few interesting things to look at. The area also includes a visitors centre, a water refill station and also public restrooms.

From here, we had to move inland to walk around a functioning waterfront packing plant. We eventually headed back towards the river via some inland trails and sidewalks through a townhouse complex. This was a little confusing and not very well marked, but we found our way eventually and emerged on Dyke Road just west of London Family Farm which, by the way, looks like an adorable place to visit.

We crossed the road to the beachside trail on the other side and continued on, but shortly after getting onto this roadside leg of the walk, we decided to turn around. It was really hot and we weren’t entirely prepared for that. I’d left my hat at home and we were getting pretty tired from being out in the direct sun. We got to around Gilbert Road before calling it a day and the intended turnaround point was at Finn Slough. We backtracked our way to the car and cursed ourselves for not being better prepared while vowing to come back and complete this walk on a cooler day perhaps in fall or springtime.

The trail is flat and easy, but it should be known that there is little to no shelter here. If you head out on a sunny day like we did, be prepared. You may go long stretches before seeing even a hint of shade.

The book suggested that this walk was 15k and would take four hours. We measured our walk as 12.3km and we were out for two and a half hours.

The Tragically Hip, to me