In my grade ten sewing class, the teacher used to let us take turns bringing our own CDs to play during our class. Whenever it was my turn, I’d choose The Tragically Hip’s Up To Here. Take a look at the Billboard charts for that year and you’ll catch a glimpse of what my classmates were bringing to the table: Paula Abdul, Milli Vanilli, Roxette, maybe some Bon Jovi. I don’t remember exactly who chose what, but I do remember that my choices, as has been common through much of my life, differed greatly from the norm. But we listened and I even claimed a few can-con converts in my closest sewing buddies. 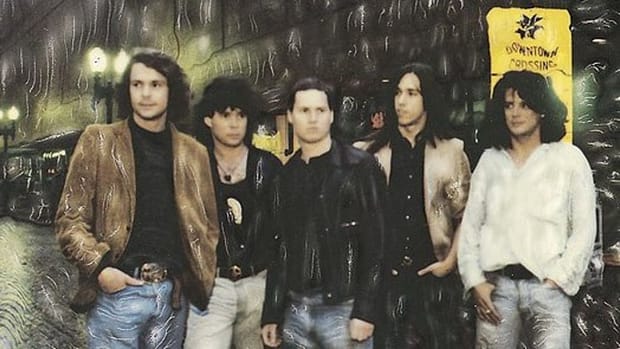 For me, the Tragically Hip’s appeal faded shortly after. I tolerated Road Apples, thought Fully Completely was okay, but gave up at the arrival of Day for Night. It wasn’t a bad breakup, but the kind where everyone just sort of moves on. I never really disliked their music, I just quit buying their albums after I felt they lost their early raw and edgy sound and had gotten a little softer and more polished. Throughout the years, I’ve heard their music, I’ve just never been moved to buy any of it.

When the band announced the terrible news about lead singer Gord Downie being diagnosed with terminal brain cancer, I was saddened, sure, but I wasn’t heartbroken. I am not overly sympathetic to celebrity figures. We hear of people getting sick and it’s awful, every single time, but it happens. Tragedy strikes every moment of every day. I am deeply sympathetic, but have learned I can’t pour out my heart in every instance. But the man was dying. And he is one of the most dynamic and entertaining front men I’d ever seen.

Then tickets went on sale. A national tour. A farewell to the band.

Not even a small part of me thought about going. My time with the Tragically Hip is long over. I wouldn’t be able to relive anything by seeing them – I only really like maybe ten per cent of their catalogue and I’d already seen them when that small fraction made up their entire live show. It’s been over for us for a long time, but like every (insert Don Cherry voice) good Canadian kid, I’ll watch their final show tonight. Possibly their final show ever.

People talk about what the band means to this country. Rolling Stone referred to them as Canada’s musical spokesperson. That’s probably true. I mean, I can’t think of a rival to them in that regard. For my friends from America and other places in the world, I don’t know if you could understand the significance of the Tragically Hip. It’s so cliche to say that they united a nation, but they kind of did. They sung about Canadian legends and hockey and things that can’t be understood without having spent a childhood here. In a world that speaks largely to you, the US of A, they spoke to us and that meant something. It may seem dramatic, but in a dynamic where we were always the neglected younger sibling, it gave us value and it gave us a sense of self-worth.

Tonight, after an extensive cross-country tour that originated in Victoria and passed through every major city, they will play their final show where it all began, in their hometown of Kingston, Ontario. The show is being broadcast on the CBC and venues Canada-wide are having viewing parties so fans can get together and watch this grand finale together. It’s a really big deal.

Me, I will watch partly because they are a part of me and because I was a part of this, a 14-year old me so proud of these Canadian musicians and wanting to share them with anyone I could. I will also watch because I want to glean some insight into how a group of people, so tightly knit after thirty-two years of not just working together, but creating together, as a team, living together for long stretches, growing together as family, will pull this off. I am curious about this concert because I want to know how they will possibly find the strength and the courage to go through with it – to go through with any of it. The punctuation on tonight’s show will be the potential death of one of the performers. That is the expectation. It’s a part of life that they’ve all been forced to accept. And to live together through. And to think about, I’m sure, much more often than they’d have ever liked.

What happens tonight will be tragic, but let’s not forget how blessed we all are to have had them, to have heard them and to have known that we were saying goodbye.

There’s no simple explanation
For anything important any of us do
And yeah the human tragedy
Consists in the necessity
Of living with the consequences
Under pressure, under pressure

If you’d like to, you can donate to the Gord Downie Fund for Brain Cancer Research.

I’m totally with you on this. I have never been a big fan of the band. Frankly, I don’t really understand the connection between their music and our sense of being Canadian. I remember songs like New Orleans is Sinking and Little Bones playing in pubs and at homes of guys I dated but I was never drawn to the music. I don’t particularly enjoy the sound of Gord Downie’s singing voice either. So with this nation-wide mourning, I feel a bit of an outsider. Cancer is horrible and scary and of course I feel terrible for his prognosis. But I don’t think I’ll be watching tonight; I’ll read the reviews online tomorrow.

Same. For a while on Saturday I felt bad I wasn’t a Hip fan, and then figured, well, we can’t all love everything. I’ve never purposefully listened to a Tragically Hip song; and while facing death with what you love most is probably the greatest way anyone can spend their last days; I wan’t sad or compelled to watch the concert. Similarly, I have no bond to celebrity or celebrities passing. They’re just people and death is (/can be) tragic and heartbreaking; BUT, shouldn’t it be tragic and heartbreaking for every member of society not just those who make headlines?