Top Posts
23 for 2023: things we’ll do this year
What should I focus on on in 2023?...
Milk Fed
My Happiness Project: February
Be your own historian
Post-vacation blues
Bad habits
Home alone
What’s going on in your community?
Quick turnaround
Home TDTFYH Columbia StrEAT food truck festival fun

Did you know that the largest food truck festival in North America happens here in New Westminster? It’s true! And, at their fourth annual event, we were finally in attendance for the first time yesterday. 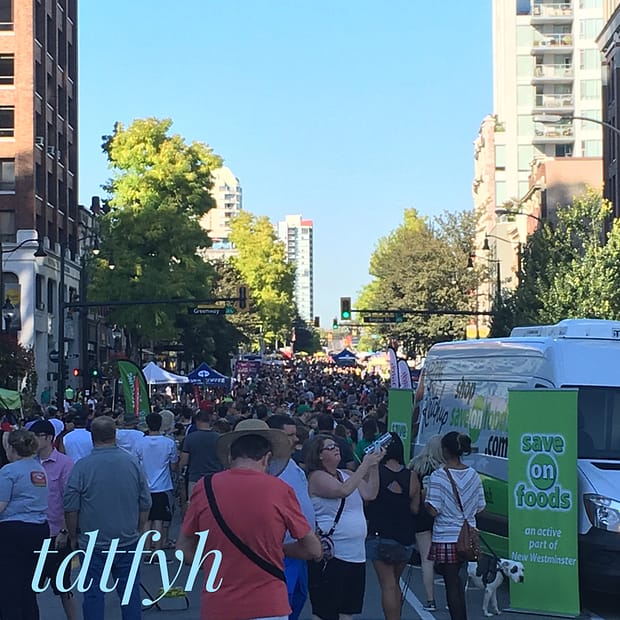 We had a pretty amazing day outside of that. We went for a nice hike out in my hometown of Port Moody, we had coffee and yogurt parfaits at one of our favourite cafes and then we visited a friend who showed us all around his very impressive vegetable garden and gave us plenty of goodies to go.

We came home and we thought about not going to the food truck festival. It was really hot and we hadn’t stopped to get cash. The counter arguments were that it was literally down the street from us and, well, I was really hungry. Kevin had some lacrosse commitments to tend to after 7pm, but it was only 4:30 at the time so we made a quick trip up to the ATM and then came right back. We walked down the street and it didn’t take long for us realize we were really glad we did.

The first stop we made was at the one place I’d told Kevin I was really excited to visit – the Maille mustard tent. There, they had samples of all their regular and seasonal mustards as well as stations where you could mix your own mustard. The sampling stations were stocked with pretzels and pickles and it was a lot of fun. I liked the seasonal mango with Thai spices mustard best while Kevin liked the blue cheese version, also seasonal.

We left Maille and headed out on what was basically an intel mission. We wanted to make sure that we didn’t waste our appetite on something we saw early on only to find out that there was something better down the road. There were, after all, ninety (90!) food trucks on site so it wasn’t like our choices were limited.

We strolled from one end to the other surveying options and commenting on anything we found particularly interesting. In the end, we each went for our traditional faves. For Kevin that means grilled cheese and for me, that’s a veggie dog. But that wasn’t all.

While he waited in line for his sandwich at Cheese Street Grill, a familiar sight caught my eye and I couldn’t help but race towards it. Johnny’s Pops are artisan popsicles that we’ve tried several times (okay, probably every time) out at Ladner Market. Our favourite is the blueberry cheesecake popsicle, but since that wasn’t on the menu, Kevin went for Creamy Strawberry Lemonade while I tried the tri-colour Mango Yogurt Strawberry. As always, delicious.

In addition to that, we sampled kombucha from Bucha Brew and the mint and algae flavour was so good, I couldn’t resist buying a growler and a fill of it.

As we meandered through tents hosted by VanCity and Save-On-Foods, we eventually got back to where we started and where I’d spotted Dougie Dog almost as soon as we’d arrived. That was my veggie dog destination and they didn’t disappoint. I opted for the Charlie Mac minus the bacon. It was really good, but I wish I’d chosen the Super Mario instead. It isn’t because mac and cheese on a veggie dog wasn’t delicious, but mostly because it’s a little bland and I tend to eat veggie dogs as a vessel for more flavourful things like hot peppers and raw onions and mustard.

By this time, Kevin was needing to think about heading home and I was wanting to catch the end of the Tragically Hip concert on tv so I basically took my dog to go and we hiked up the hill, but not before one more stop.

We rounded the corner of our street and there was Cannoli King. Now, my experience with cannoli ends with Marie Barone, but given how much her husband, kids and grandkids loved cannolis, I’m not going to lie, I’ve been curious about them for years. So I stopped. Kevin said he didn’t want one, but insisted I take the deal of three for $10 vs the single for $4 so I didn’t really believe him from the start. Cannoli King makes “the original Sicilian cannoli of Vancouver” though I wouldn’t know how to compare it to anything else since this was my first cannoli experience, but they were really good. (And, no, I didn’t eat them all.)

So, we went and were glad we did. Here are a few of the ways I almost talked myself out of going and what I discovered about my excuses after actually doing it.

Ninety food trucks? Come on. I’m only going to be able to eat from one or maybe two of them. We made actual purchases at five of them, but it was still fun to look at all of the trucks themselves, their menus and the food as other people walked away with it.

It’ll be too crowded. It was crowded, for certain, and in some places more than others. It’s held all the way down Columbia Street which is quite a large area so there is lots of space for people to spread out.

The line-ups will be too long. Anybody who knows me knows that there are very few things I feel are worthy of standing in line. In fact, off the top of my head, I can’t think of one at the moment. I don’t stand in line for anything so I thought that when we went, it’d be a frustrating series of lines. In truth, with so many options and, again, so much space, there were hardly any lines. In fact, we only stood in two lines – about three minutes for the grilled cheese and maybe five for the popsicles.

It was a really nice (and brilliant!) touch that the organizing group arranged to have a big screen erected to show tonight’s Tragically Hip farewell show in Kingston. At the top of the festival, you could see and hear all the action from the concert and that drew a the largest crowd of all.

Congratulations to the Downtown New West Business Improvement Association on organizing a great event like this. I’m sure tons of planning goes into it and it seemed to go off without a hitch. It certainly gives residents like us a feeling of pride that our city can play host to something so big and well-attended. In case you’re wondering, here’s a look at what the layout of North America’s largest food truck festival looks like.

The Tragically Hip, to me