This summer, we started a new habit of picking a destination from our 109 Walks book and enjoying a hike in a new Lower Mainland location each weekend. Here’s where we have visited so far: Deer Lake in Burnaby, Watershed Park to Mud Bay Park in Delta/Surrey and Steveston Greenways in Richmond.

For the fourth installment of our Walking Vancouver adventure, I chose a place that was a little special to me. The trail that we did on this particular day was one that I’ve done a thousand times before – with my parents, with my brother, with my aunt and with my cousins, in high school, I’d also done it with my friends. It was familiar, but it was also a reminder that it’s been a long time since I was in high school and that a lot has changed since then including Belcarra Regional Park. 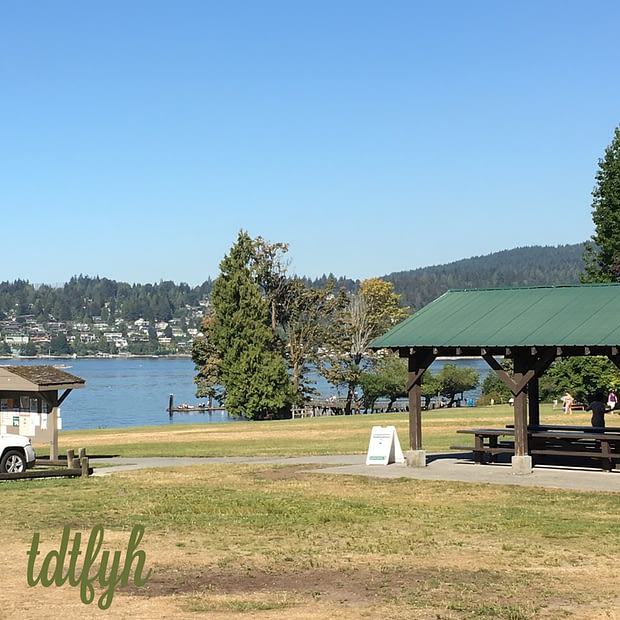 So, this trip was special for all the memories I have there, but it was also a fun opportunity to share something meaningful from my childhood with Kevin. We’d been to the picnic area at Belcarra once last summer, but he’d never been on the trails there before.

It was another hot August day so we left the house early enough to get there before things heated up too much. While legions of cars parked in all surrounding areas of Sasamat Lake and White Pine Beach, we carried on to the much less crowded Belcarra. (I honestly don’t understand why this happens every single summer day. In my opinion, Belcarra is miles nicer than Sasamat, plus it’s access to the ocean, which is also way better than lake.)

We had the option of two different trails from our starting point. The first option would take us along the Admiralty Point trail, the other in the opposite direction along the Jug Island Beach trail. We chose Admiralty Point because it’s the one I am so familiar with.

Once we were parked, we packed up my little backpack with lunch and drinks and hit the trail. It begins right beside the (very well maintained, I must say) bathrooms in the picnic area of the park.

Early on, the path head upwards. Some of the longest and steepest climbs are at the very start. That said, none of the climbs are particularly long or steep. It’s mostly a rolling trail that climbs up and then comes down, climbs up and then comes down again. It isn’t too challenging from a fitness standpoint, but it is rather precarious when it comes to grooming. Look out for roots, rocks and other unstable footing along your way. There are many railings, fences, stairs and bridges built into the trail, but it is a true nature hike vs the trail walks that we’ve being doing to date.

This isn’t a scene from the trail, it IS the trail

Early on in the trail, for the first kilometre or so, you’ll catch glimpses of the ocean as you move closer and further away, up and down on the slopes. Eventually, as we approached the second kilometre mark, we started to come across small beaches and rocky overhangs. Cod Rock is the first place that warrants a sign, the second is Admiralty Point.

Admiralty Point is 100 metres from the main trail and once you get through the trees, it opens up to rock faces at a few different heights. The first thing I did was climb down to the tiny beach area in front of the rocks. If I’d known that the tide was on its way out, I would have waited for a few minutes, but as it happened, I felt like an Olympic gymnast balancing myself while putting my bare feet into the water without getting my shoes wet or my feet cut up on the barnacles that were everywhere. (This was, of course, the day I didn’t bring my big backpack with the aqua socks inside.)

This was a really nice place to sit and eat the leftover pizza that we’d packed for lunch, catch our breath, rehydrate and enjoy the views that reach as far as the Port of Vancouver.

As a kid, Admiralty Point was our end point on this trail, but our book actually directed us to take this trail to the end which is Burns Point, overlooking the Burrard Inlet and to Barnet Highway across the water.

Burns Point is about a kilometre further down the trail, but the leg between Admiralty Point and our final destination was significantly tougher than the early trek. It’s hillier, the trails are narrower and the ups and downs are steeper, too.

Once we got to Burns Point, we did little more than just turn around and head back the way we came. Admiralty Point is certainly the highlight of the walk as far as scenery goes. If you venture out on this hike, make that the place you stop for a rest.

This trail isn’t super easy, but it’s enjoyable. It’s mostly forested area so there is plenty of shelter from the sun. Pack a hat if you plan to spend a lot of time on any of the beaches or rocky viewpoints because they are wide open.

According to the book, this hike was 5.2 km and should have taken two hours. We measured almost exactly 6 km and took one hour and forty minutes.

What’s your favourite snack to pack when out walking or hiking? Do you prefer lake or oceanside views?