Seven in the morning, Our regular Starbucks. We approach the door to enter and there is someone on the other side. He’s dressed in sweats, of a slight build and taking a long time to do whatever he’s doing. There was an awkward dance of us pausing to see if he is coming out and eventually, Kevin opened the door and it became clear that this guy had his own thing going on and wasn’t going either in or out anytime soon. He was clearly struggling, though whether that was with life in general or with mental health issues – or both – was unclear. We entered, passed him and carried on our way.

On mornings when we run, we usually pick up breakfast sandwiches because we’re hungry and our boardwalk jaunt has eaten up a lot of our extra morning time. We approached the refrigerator case and perused the selections that are the same every single day, talked about what we were getting and placed our orders. Kevin went first and as I collected my coffee, I turned around to see that he wasn’t at the – what the heck do you call the station where you fix up your coffee with cream and sugar? – whatever it’s called, he wasn’t there. He was outside the front door.

When he came back to the bar to pick up his double smoked bacon sandwich, I asked what was up and he said he’d been outside “to see if that guy wanted a coffee, but he was gone.” As we walked to the car, I could see that he was still looking around. I said, “I wonder where he went.” As he pulled the car around and through a different exit than the one we’d usually take, I could tell that he wasn’t about to give up easily. As we made our way around a corner, I spotted him and said, “there he is.” Kevin was on a mission. He pulled out and navigated a roundabout then pulled over quickly. He rolled down the passenger window and bellowed across me, “Hey! Buddy!” The man’s head snapped around. “You want something to eat?” Without a split second of hesitation, he gave a huge nod of his head and said, “yes!” He walked the fifteen feet to the side of the car and Kevin handed me his hot sandwich. “Here, give this to him.” 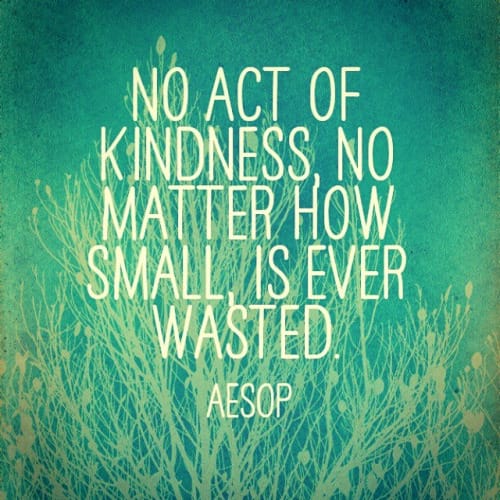 I’d seen him earlier and I’d sent love and compassion to him when I did, but this was the first time that I’d really looked at him. He was probably my age, he had scars on his face and wore his rough road on his sleeve. He wore just an inside out t-shirt and sweatpants and carried nothing with him. He was missing teeth, but had shaved recently, including his head. It was impossible to tell what his story was, but he didn’t need to justify his need with homelessness or addiction or mental health issues. He is a human being and we are all connected. That factor trumps all others.

I held the sandwich out the window and he reached out a took it. He looked me in the eye and he said, “Thank you. Have a nice day.”

As we pulled away, all I could say to Kevin was, “that was really nice of you.” And there was silence in the car for minutes. Eventually, he said exactly what I’d been thinking and what was the hardest part of the whole thing: “All those people just walked by him like he didn’t mean anything.”

I understand why more people don’t commit acts like this. It’s really hard. And it can also be really scary to approach a stranger and say, “you look like you really need something. I can help.”

We were in Vegas earlier this year with my family. Six of us were dining together and ordered way too much food for ourselves. When we were all full and ready to move on to our next destination, my brother suggested that we give our leftovers to someone who needed them vs having the staff throw them out in the back of the restaurant. Everyone at the table was on board and I felt a sense of pride and admiration that my sibling and my dad were so enthusiastic about giving – it was a side I’d just never been in a situation to see before. As we packed everything up, everybody was high on a feeling of charity. When we got outside, we headed down the street and a curtain of shyness descended on all of us. It was lucky that Kevin was there because he was the only one that could pull the trigger in a situation like this and he set a great example for all of us.

When we see people struggling or suffering, we avert our eyes. We look away and we do our best to avoid them. What are we really avoiding? For me, I know that I am avoiding the absolute heartbreak of knowing that this person in front of me was once the love of someone’s life, was once a tiny baby in its mother’s arms, was once a young child squealing with delight on a playground somewhere. They once had a book that they loved or a pet that they cuddled. They smiled and they laughed. They came from somewhere, belonged to someone and then something happened. They took a wrong turn or some chemical reaction took place or they forgot how to cope or they lost something or someone. Seeing that and being close to it forces me to think about just how fragile life is and that just totally breaks me. Because it’s so sad and so lonely and so terrifying.

I wanted to share this story mostly because of the immense love and pride and admiration I felt for Kevin when I saw him in action this morning. There was no motivation for him other than helping when he saw someone who needed it. It wasn’t a photo op or a story to tell. He intentions were pure and simple – to ease someone’s suffering, if only for a few minutes. As far as I’ve seen in my life, no person can display greater strength and wisdom than that and we could all stand to take a page out of his playbook.

Things we’ll do this month: October

thanks for sharing, Carly.

I know for me, a lot of the time I think that people aren’t always helpless. I have given leftovers or a few dollars to homeless people I see on the streets. Many times, I see really able bodied, clean cut people at freeway off ramps asking for money. I shouldn’t think that they’re always trying to scam, some of these people really need help. I feel bad for them. I wish more was done to help people in need like this. I wish there were more shelters and people didn’t have to sleep on streets.

What this post has done, is made me see that it’s so very easy to help another person. Not to feel like they couldn’t possibly want my help.

And now I realize I’ve rambled.