Top Posts
23 for 2023: things we’ll do this year
What should I focus on on in 2023?...
Milk Fed
My Happiness Project: February
Be your own historian
Post-vacation blues
Bad habits
Home alone
What’s going on in your community?
Quick turnaround
Home TDTFYH September in review

September was awesome and amazing and so very many things. In terms of my things we’ll do this month list, it was also a massive failure. But, hey, it’s all good since we made great strides (literally and figuratively!) in other areas. 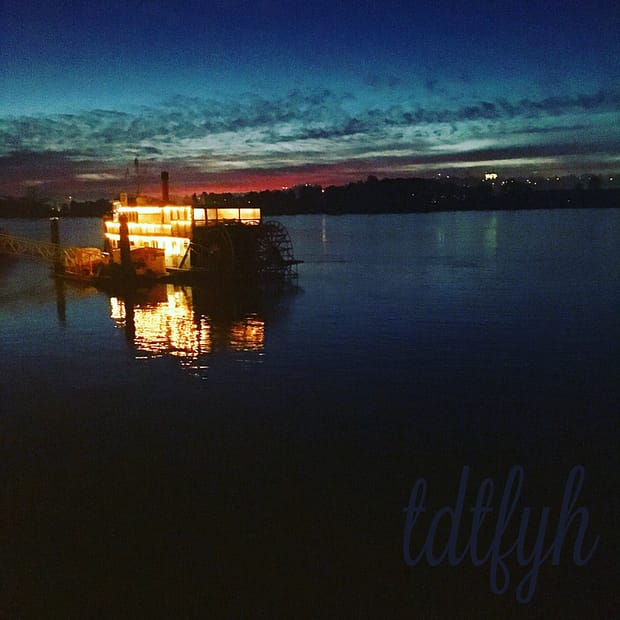 My favourite photo of the month:
The Paddlewheeler before dawn on the Fraser River in New West

Man, looking over that list for the third time in a week, it’d be really easy to beat myself up about not hitting many of my targets, but I’m actually pretty cool with it because I know we were out doing other things.

Running – September was the month when I got serious about running. (Kevin was about a month ahead of me.) I started committing to do it regularly and tracking my progress. I  convinced our friend Tyson to be my running coach and took that part of our relationship seriously. I struggled with shin splints and had to toss the last three pairs of shoes that were professionally fitted and replace them with something that would actually work for me. Running became something that we focused on every single day whether we were out training or not. Just this week, we’ve been brainstorming how to do more for the major support roles of sleep and nutrition. We were recently asked what we were training for and the conversation just went silent. We realized that we haven’t set a goal race or accomplishment and, I can only speak for myself here, but it actually feels eve more powerful to be newly aware of that.

Seattle baseball road trip – The Blue Jays were in Seattle to play the Mariners this month which was a big deal for the many Canadians who believe that they are Canada’s team. (Let me take a moment to say that I think that is a totally ludicrous theory.) We went down with some baseball loving friends including one devoted Jays fan. We only stayed for the game, arriving just before it got underway and leaving immediately after it ended. In an extra innings win for the Mariners. Yay.

Just remembered how obnoxious it is when Toronto fans descend on a visitors barn. Let’s go Ms! Or, you know, whatever.

Other stuff we did:

But I’m not going to lie: this month was mostly about running. Doing it, preparing to do it, talking about doing it. I know, I know. Snore.

What did you get up to in September? What were your highlights for the month?

Things we’ll do this month: October

Something to look forward to

What shoes did you settle on? I had awful shin splints which were slowly replaced with calf pain.

I got New Balance 1080s in the end, but it was between them and Asics Nimbus. I can’t stress the satisfaction of having a pro fit your shoes before you buy them. I had a couple go wrong before this experience and in hindsight, it really felt like they had their own idea early on and didn’t really listen to me. I was fitted for shoes with a lot of support in the past and I believe now that assessment was way off. The fitting this time was at a small running specialty shop and the guy who fit me took over an hour to do it. He’d put me in a pair of shoes, watch me walk, then put me in another pair. When we narrowed down to a few finalists, he had me put them on and actually run around the block. It was such a helpful experience and he was a really patient guy. He just listened and listened while I rambled on. In the end I went with a neutral shoe and I felt the difference immediately.

A couple of other things are majorly related to my success so far.
1. Calf sleeves. They are the work of the gods. Total game changer
2. Running coach. It is so good to have someone who listens and makes suggestions and also (this was a BIG thing for me) reminds you that running IS hard and that sometimes it’s going to hurt.

I still have some pain – shin splinty in one leg and calf pain in the other leg that I think is due to compensation for the shin splints, but I have a post-run routine designed to minimize it and every run gets easier and less painful.

In the end, I don’t think there is such a thing as a good shoe or a bad shoe because it all depends on what your foot needs.

I have been fitted in the past and went through 4 returns/new pairs before I settled on the ones I took home which were hit and miss.
I don’t run and have zero interest in it but am out walking 20-30km a week and the pain is getting worse and I definitely need a new pair of shoes (aka: probably why the calf pain is getting worse)

thanks for your insight