Top Posts
23 for 2023: things we’ll do this year
What should I focus on on in 2023?...
Milk Fed
My Happiness Project: February
Be your own historian
Post-vacation blues
Bad habits
Home alone
What’s going on in your community?
Quick turnaround
Home TravelOrlando Orlando – day three 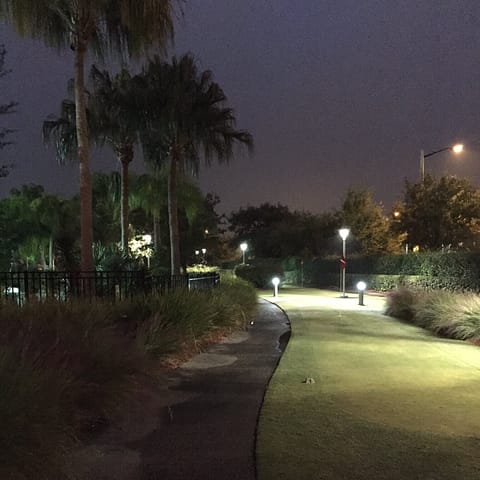 Anyway. We woke up bright and early on Monday morning to take advantage of the quarter mile track that our hotel has to offer. I don’t know what I’d do if I couldn’t run outside. I probably just wouldn’t run because I have no interest in treadmills. Also, they kind of terrify me.

We hit the track and learned that running in Florida is different than running in BC. There is humidity and heat to battle. Neither is so bad in and of itself, but it sure does make it tough to breathe! And a quarter mile is a very short distance if you are doing it multiple times to meet your goal. At home, we are lucky to have a large enough space to run in that it never really looks the same. A quarter mile is nothing and you see the same thing over and over.

But even a repetitive run is good. And, in FLA, sweaty.

I headed to my conference for breakfast and the keynote address featuring several Kronos staffers (Kronites) and Seth Mattison, an expert on workplace trends. Seth was inspiring, thought-provoking and entirely enjoyable.

Once the two-hour kick-off was complete, we collectively made the trek from the Hilton to the Hyatt Regency (about ten minutes) to get started in the day’s learning sessions. I spent some time getting educated about burnout, organizational design and using data to improve productivity and efficiency. It was a lot to absorb, but it was good.

One of the things I’m most curious about at conferences is the food they will serve. I love seeing how innovative catering can get especially with really large groups like our 2.5k crowd.

Breakfast was pretty standard, as was lunch. Snacks were fruit and muffins, croissants, etc mid-morning and fruit, popcorn, nuts and cakes mid-afternoon. The mid-afternoon almonds and perfectly shaped tiny pear (they called it korelle on the basket, but Google has never even heard of such a pear, so) were my favourite part.

Things I ate for the first time today:

After my day of learning, I was ready to retreat back to the room for a little time out. Only about an hour later, it was time to get moving again and catch the shuttle to the evening’s festivities: the customer dinner.

Each year at KronosWorks, attendees are organized by their industry. Many events are applicable to everyone, others are tailored to a specific industry. The customer dinners are a networking opportunity for people in the same industry. They are always a special event and this year, the manufacturing and energy group (my industry) were whisked off to a private “block party” at Universal City Walk. Bob Marley’s, Pat O’Brien’s and Rising Star. Tables were set up serving small plates, there were life sized board games to play and the bars were open with different entertainment in each (Monday Night Football, Dualing Pianos and karaoke, respectively.)

The most interesting part of the food for me (and from a distance) was a MASSIVE pot of jambalaya. Kevin liked the sliders. I just ate some plain pasta and an M&M ice cream sandwich. (To my knowledge, we do NOT have these in Canada.)

We watched a little football and then decided to break out from the party and explore the surrounding area.

If you’re like me and haven’t been in an amusement park in a looooong time, it’s a real change of scenery. Lights, action and people EVERYWHERE. It was neat to walk around and see everything that was going on in a place designed to be totally excessive and to completely overwhelm your senses. Mission accomplished! (And this was after the rides and parks seemed to have closed.)

We walked a loop around the area and poked our heads into the different stores and kiosks we came across. Kevin picked up a Grinch holiday shirt for our upcoming Santa Shuffle (benefiting the Salvation Army) and I got my Orlando and Florida Starbucks You are Here mugs.

Once we’d made a full loop, we headed for the shuttle area and made our way back to the hotel for a swim and to get some sleep.

It was a really fun night and just another detail that makes this conference such a specatacularly organized and enjoyable event.

It’s been three busy days since we left home and the conference is only a little more than third of the way through.

Me being on conference is something we’ve never done before, but I think Kevin had a fun time wandering around and hanging out at the pool during the day. Thankfully, KronosWorks is a very spouse-friendly conference and that is super awesome because it means I don’t have to choose between leaving him alone in the evenings and missing some of the fun! ????

One and a half more conference days, the BIG special event and then we’ve got a couple of true vacation days coming our way!