Top Posts
23 for 2023: things we’ll do this year
What should I focus on on in 2023?...
Milk Fed
My Happiness Project: February
Be your own historian
Post-vacation blues
Bad habits
Home alone
What’s going on in your community?
Quick turnaround
Home TravelOrlando Orlando – day five

Approaching 1am on Wednesday morning, I was sipping rehydrated clear noodle soup because I hadn’t eaten dinner at the Wizarding World of Harry Potter. Approaching 7am, my wake-up call for the final day of the conference, I was a new level of tired. I thought I was exhausted on Tuesday morning, that was nothing compared to Wednesday. I had a Harry Potter hangover.

Fortunately, day three at KronosWorks is just a half day and it composed of three quick and easy morning sessions. I went, I saw, I grabbed my to-go lunch and came back “home.”

I’d left Kevin at our hotel because we needed him to check out of the room while I was away and then store our bags at the bell desk. We weren’t leaving town yet, but we weren’t sticking around the Hilton any longer either. When we were planning the vacation part of this trip, I’d discovered that after the final day of the conference, the Hilton was sold out. I went on Hotwire (hotel roulette as I like to call it) and found something else, but it meant we had to move mid-trip. No biggie. 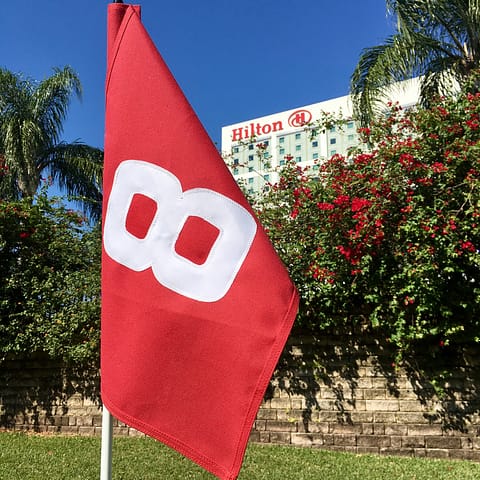 We had one final lunch at the Hilton, went for a swim, played some golf and then got a cab over to our next destination: Caribe Royale.

I feel like one of my favourite things to happen this day was the conversation we had with our cab driver. He’s a guy who moved from the Bronx to Orlando twenty months ago. He’s happy here and says that it’s much more affordable. He owns four cabs and gave us his number when he dropped us off so that we could call him if we needed to go anywhere else. This was perfect since we actually would be needing a cab. I was able to text him later and he agreed to pick us up next time we were on our way out. That part was convenient and cool, but it was also nice to just have a conversation with someone who has a totally different experience of life than either of us do. This, THIS, is what makes traveling so interesting.

We checked into our hotel, were given a room way earlier than we’d expected (hey, it never hurts to ask!) and here is where the most bizarre thing that’s happened so far on this trip happened.

We made our way through the hotel lobby, out and around the pool, into our tower (it’s seven floors, easy guys) and to the door of our room. We used the key to open the door and we’re just as surprised as the housekeeping employee who was eating her lunch inside. I just laughed, but she apologized over and over and over again.

A couple things here. First, if you were to ever ask me what I thought would be the worst job in the world, I would tell you it’s hotel housekeeping. We all know that people tend to misbehave while away from home and hotels give them a sense of anonymity. That, friends, is a killer combination. I bet housekeeping sees a lot of things that they just can’t unsee. Gross. Second, I didn’t think it was that big a deal. It was just really, really weird and awkward. But, hey, I’d rather she eat her lunch than not – it was just weird that the smell of someone’s home cooked leftovers lingered in our room for a while. Third, she just kept apologizing. Like she was really scared of what was going to happen. And that made me sad.

It took a good twenty minutes of just sitting in silence in our room to shake off the awkward feeling from that encounter. Also, trying to connect to our not so solid wifi.

So, we comforted ourselves with something we’ve started to become hooked on: TLC.

We don’t have channels like The “Learning” Channel at home and, as Kevin keeps pointing out, there isn’t anything to learn on them at all anymore. I call it hotel TV and it’s something I look forward to on my trips to the US.

These are just a few of the shows we’ve had on in the background this week.

And, I mean, where do they come up with this stuff? No wonder marriages never last, they’re increasingly treated like game shows!

Eventually, we roused ourselves and headed check out our new pool.

This hotel is a little different than our last one. First of all, it’s busier. This may be attributed to being in a much smaller area. The property is big, but the common areas are a little crammed together. The pool is a bit smaller, but it’s situated in a way that allows for more pool deck space and there were ten times as many guests taking advantage of that than there were at any one time at the Hilton, maybe even combined. The entrance and lobby area are pretty opulent, but also dated. We’re not picky, though, and I t’s nice enough. Besides, we rarely spend much time in any hotel room.

…Except our first night there. The rush of everything we’d been doing since we left home combined with not having any events to attend left us feeling tired and a little lost. So, we wandered around and explored the hotel, ordered a pizza from the take-out cafe in the lobby and went to bed early. (After binging on My Cat From Hell episodes. Not TLC, Animal Planet.)

I realized when we took a walk on Wednesday night that it was the first time that I’d actually stepped foot on a real Orlando street. I anticipate plenty more Orlando streets in the two days until we leave for home.