Top Posts
23 for 2023: things we’ll do this year
What should I focus on on in 2023?...
Milk Fed
My Happiness Project: February
Be your own historian
Post-vacation blues
Bad habits
Home alone
What’s going on in your community?
Quick turnaround
Home TravelOrlando Orlando – day seven
OrlandoTravel

Friday. Our last full day in Florida and we had one thing on our minds: space. Well, that and the space coast. 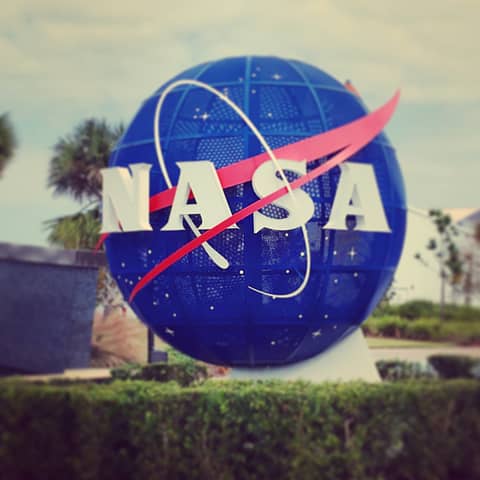 Kevin had made arrangements to rent a car and we were taking a drive out to Kennedy Space Centre, estimated to be about one hour outside of Orlando.

I’d been to NASA once before, when I visited Houston twelve years ago (I remember because that trip, too, and as just after an election.) but Kevin never had. My visit to Johnson Space Centre definitely left me game for going again.

We hopped in our car and headed east to Titusville. A friend had warned me to be careful driving because all the highways are tolled and if you get off at the wrong exit, you’ll end up paying the same tolls over and over. That was a sound warning and we totally did that. The upside of a lot of tolls: I got rid of almost all the American change (about a zillion pennies), some of which I’m sure I had been carrying around for a decade. ????????

The ride was smooth, well-marked and we made it there safely in less than an hour. There was plenty of parking ($10/car) and we found a spot easily. We walked up to the ticket sales area and skipped the line-ups, opting for self-service instead. The process is easy and user-friendly and we had tickets in hand ($50/person) in minutes. One quick stop for a photo with NASA’s ubiquitous logo statue and we were on our way.

We entered with the rocket garden on our left and walked through some of the early displays. We ducked in to watch a movie in the Journey to Mars exhibition. That’s when we found out that there was a lunch happening the very next day after we were there. We were super bummed that we were so close, but would still miss it! I can’t even imagine how cool it would be to see something like that!

We hopped on the bus and took the tour over to the Apollo/Saturn V Center. On the way over there, we got to see a launchpad, the monstrous Vehicle Assembly Building and even the rocket that is launching tomorrow in the distance.

At the Apollo/Saturn V Center, we watched two videos detailing the Apollo launches, then walked into a room that houses the Saturn V, the largest rocket ever flown. We toured many exhibits inside this huge building and even had lunch.

The food was decent, (My first veggie burger in Florida!) but I thought it would have been better if it had all been space food. ????

Although, this is kind of space food…

Once we were done roaming around, we headed back to the main visitors part of the centre and explored the Atlantis building. Upon entering, we watched a film about how space shuttle technology has evolved. Once the first film was complete, we were moved into a second room for another film. The finale of the second film and the introduction to the exhibition were so wonderful and seamless, it was probably my favourite part of the day. The next part was Kevin’s favourite: the shuttle blast-off simulator.

By the time we left the Atlantis building, we realized that we’d been at the KSC campus for seven hours! And we’d thought we’d have a bunch of time to go to the beach. Ha!

We left shortly after that, but not before we checked out our route to the (now dark) beach and former home of some friends, Cocoa Beach. Our drive through Port Canaveral took us straight into Cocoa Beach and we stumbled across a night market there. We couldn’t resist so we pulled over and parked the car. We took a stroll through the market and stopped to split a delicious lobster roll (my first!) and New England clam chowder from Jazzy’s Mainely Lobster. Once we’d had a look around, we were heading back to the car when Kevin asked some locals about a bar we’d been told to visit. He asked the right people! We stood and talked to this lovely couple for about fifteen minutes. They were so friendly and directed us to Coconuts (the place we wanted to go), to the pier where we could see the ocean and insisted that we stop at Ron Jon’s before we left town.

I’d never heard of Ron Jon’s, but Kevin filled me in that it’s a really famous east coast surf shop. Now, even as someone who has never surfed, I LOVE surf shops. And Ron Jon’s did not disappoint.

But first we hit up Coconuts. Our friends who now live in Turkey, but once lived in Cocoa Beach recommended it and on this Friday night it was hopping and literally right on the beach. It was like being in a surf movie party!

Next up, we headed down the road to Ron Jon’s. To say the place is huge is an understatement. As far as the eye could see there were branded t-shirts, surf boards, hats and, as Kevin out it, “every kind of flip flop you could imagine!” (True story!)

I regret not taking any pictures inside the store because it was such a cool place to be, but it was impossible to resist shopping so, put it this way: we took a lot of other souvenirs away from there.

After that, we turned our Chevy Impala towards Orlando again and headed back to our room at the hotel to pack up the rest of our things and hit the pool for a midnight swim.

Our trip was quickly coming to an end and we did a debrief on our ride back to the city. It had been a lot of fun all around and Kevin even suggested it might be one of our best trips ever.