Top Posts
23 for 2023: things we’ll do this year
What should I focus on on in 2023?...
Milk Fed
My Happiness Project: February
Be your own historian
Post-vacation blues
Bad habits
Home alone
What’s going on in your community?
Quick turnaround
Home TDTFYH Just say no

I’m more than a little bummed. Our plans to head south and watch the Super Bowl, wedding plan, attend WWE Raw and just plain old visit for the weekend are going, well, south. It’s snowing here and that’s putting a real damper on things. For one, with just a little snow, our apartment becomes either a prison or a death sentence. The road to access our garage never gets any attention and the only way out is doooooown. Even if we did get out and hit the highway, the real problem is that we wouldn’t have anyone to take care of the cats in our absence. A quick overnight? No problem! But this is a minimum of four days away. We were supposed to leave this morning so our trip has already been cut short by one. Thanks for nothing, Mother Nature!

This is one a few posts that I’ve been thinking about and writing in my head for what feels like ages, but is probably more like a few months. I don’t think it’s fair to call it a pet peeve, but it’s something that I noticed and that has provided the opportunity for endless wonder.

So many people never just say no.

Or they just avoid the question and don’t answer at all.

I’ve tried to tell people that they don’t need to explain themselves to me. I’m not a teacher wondering why they didn’t finish their homework. I’m not their parent or a policeman who pulled them over. They’re welcome to share their lives and I appreciate when they do, but in the situations I’m talking about it’s a forced thing. And most of the time I know that they’re lying.

This is a generalization, of course. I don’t usually have a problem saying a no, but I have noticed myself over explaining a few times since I started keeping track.

Through my observations, I’ve come to the opinion that we (again, massive generalization) have become so fearful of disappointing others and any icky feelings that come along with it that we constantly feel the need to make everything feel good. And by “good” that often means making things appear out of our hands, an unfortunate convenience or not our fault.

I caught Kevin doing this the other week. When someone on the street asked him to spare some change, he replied, “Sorry. I only have debit.” I asked him why he felt that he needed to justify his answer to someone he didn’t even know and to whom he owed nothing. He didn’t have an answer, but it prompted some great conversation.

I don’t just see this at work. It happens everywhere.

So, I started being really conscious about just saying no when I meant it and delivering the truth, the whole truth and nothing but the truth. If you know me in real life, that isn’t a huge challenge. I don’t have much of a problem being candid and, in general, I prefer using spoken words sparingly.

Truth be told, this isn’t the first practice I’ve had. For years I have railed against that thing they do at the grocery store where they ask you, “would you like to round up for/make a donation to <fill-in-the-blank-charity-that-only-a-horrible-person-would-say-no-to>?” NOPE! That practice preys on exactly this emotion in people – the part of them that wants everyone to be happy and everything to be good (out of our hands, an unfortunate inconvenience, not my fault.)

Now, you do you. I’m all for that. If you want to explain all day long, explain yourself away all day long. I’m in no position to tell anyone how to live their life. The thing is, through all of this contemplation, it’s started to make me a little sad. The part that makes me sad is imagining people walking around not telling the truth, not feeling comfortable in saying what they mean and meaning what they say. Wouldn’t life be more comfortable just telling it like it is? I want people to be proud of who they are, their feelings, believe wholeheartedly in what they believe and possess a confidence that they are capable of making their own right decisions.

Know what you want. Say it as it is. Own it. Move on.
It seems like a simple recipe to loving yourself.

But, of course, this is just my take on things. What’s yours? 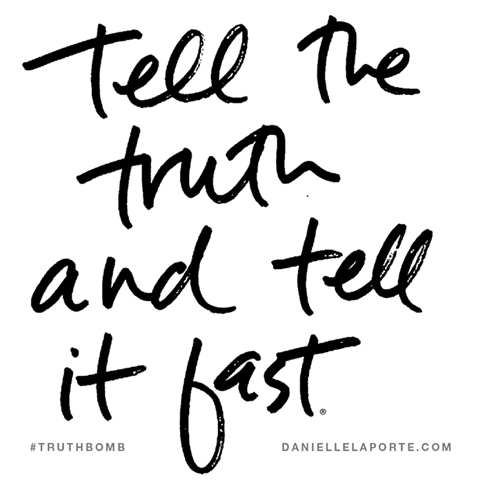 Do you like to give a long explanation for why you make the decisions you makes? Do you like to be on the listening end of one? Why do you think people feel the need to justify their no answers more than their yeses?

Stuck at home & my mom’s birthday