Top Posts
23 for 2023: things we’ll do this year
What should I focus on on in 2023?...
Milk Fed
My Happiness Project: February
Be your own historian
Post-vacation blues
Bad habits
Home alone
What’s going on in your community?
Quick turnaround
Home TWDTM Stuck at home & my mom’s birthday

I basically wanted to bawl my eyes out when I woke up this morning. Today was a last chance at warmer, drier weather that would enable us to hit the road and visit some of our besties in Vancouver, Washington. We’d been looking forward to this trip for so long and now I am so, so sad.

We spent yesterday entirely indoors. The road behind our house is already a disaster and we won’t be going anywhere by car for a while.

The upside is that this is really beautiful snow – the fluffy kind that sort of swirls up and around in the air instead of just falling straight down. Now that our vacation has been forcibly turned into a staycation (god, I vowed that I would never use that word) we’ll probably take a walk and enjoy the beauty of this torturously paralyzing weather while hitting up the local grocery store.

A few weeks ago, I lost a bet so I’ll need to make a carrot cake sometime between now and the Super Bowl. I took the Steelers, but it was mostly a pity bet after my counterpart was super bummed about the Seahawks losing. Now that we are stranded in town, we’ll be watching the game at his place and it’s time for me to pay up. (He owes me homemade dinner.)

If you know a good carrot cake recipe, speak now or forever hold your peace.

Everybody has been talking about having allergies lately which seemed strange when I heard it, but now I understand. Like all reports I’ve received, it’s like a cold – sneezy and sniffly – but it never materializes as anything more. Poor allergies get the blame. Realistically, it doesn’t seem all that likely – I mean, what allergen is in the air at this time? I know people really hate snow (which, for the record, I don’t – I just hate it when it interferes with my plans) but, come on. Maybe its residual from being sick this time last month. I don’t know.

Here’s another person I won’t get to spend today with: my mom. It’s her birthday, but like our back road, her entire neighbourhood becomes an instant (and totally inaccessible) winter wonderland with the fall of the first flake. We finally set up the AppleTV that we bought my folks for Christmas (my dad reported on Wednesday that it is, and I quote, “the cat’s ass”) so I’ll bet that they’ll spend this snow day alternating between shovelling their sidewalk and driveway and binging on Longmire. In anticipation of our absence this weekend, we did have a birthday dinner (at what’s become our standard birthday family dinner destination) with her one evening this week, but she was supposed to party with my bro and his crew today so that had to be cancelled.

We are opposites in many ways – she’s meticulous, I have a short attention span; she’s dedicated, I’m flighty; I’m abrupt, she’s diplomatic; she’s neat, I’m messy; she’s patient, I’m…not. She gives me a lot to look up to and to admire. She has been generous and supportive all my life and I’m thankful for everything she has given, taught, shown me over all these years. I don’t know what I’d do without her. 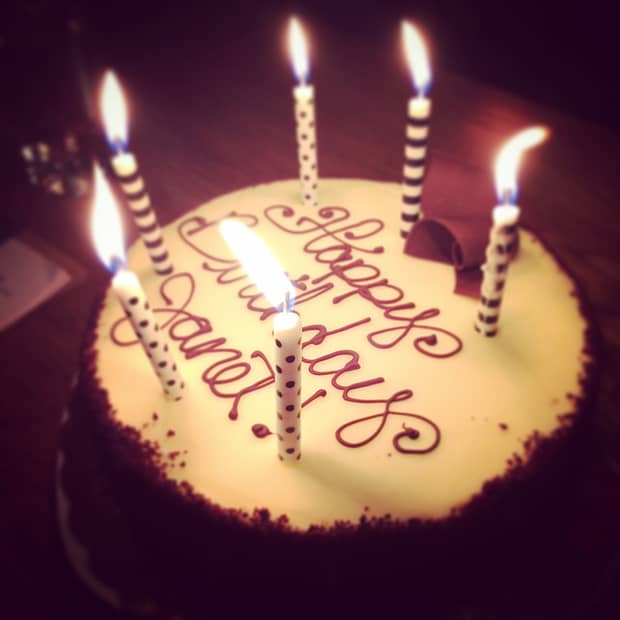