Top Posts
23 for 2023: things we’ll do this year
What should I focus on on in 2023?...
Milk Fed
My Happiness Project: February
Be your own historian
Post-vacation blues
Bad habits
Home alone
What’s going on in your community?
Quick turnaround
Home TDTFYH The morning after & when decluttering sucks

There is a reason I never chirp other people and their teams. That conscious decision was justified last night when nothing but a couple of messages of condolences came my way over the airwaves. With the exception of one total asshole, it made me feel a lot better about the people I choose to have in my life. 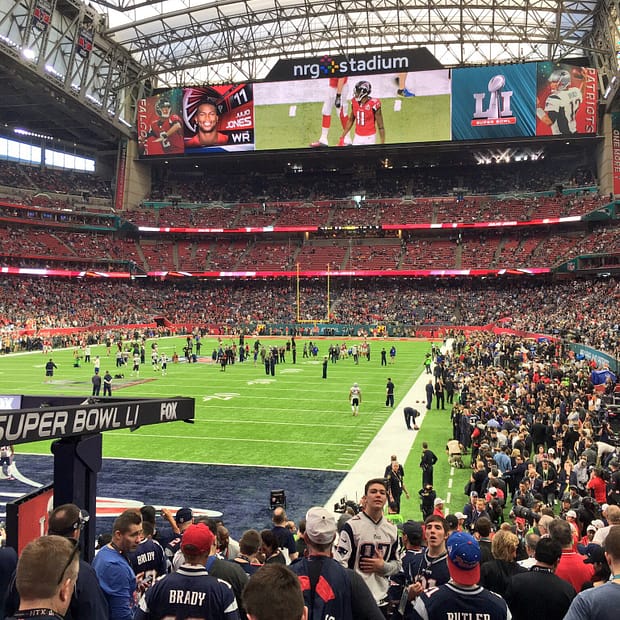 There are sixty minutes to play in a football game. The Falcons were powerhouses for only thirty of them. The Patriots took over the other thirty. At the end of the day, Tom Brady gets the win and nobody cares how much effort he put(s) into making America great again. But it is, after all, a sport and he needs but to be a good quarterback – no need to be a good person. As a Falcons fan it was interesting to note the praise that Aikman and Buck were able to turn on once the comeback had been started and one man led a team to victory from a 28-3 deficit. Disappointing that the man who led a team to a 28-3 lead and was voted Offensive Player of the Year and league MVP got none. I don’t want to sound like a sore loser, but they certainly did seem to be much more comfortable once the opportunity to jerk off to Tom Brady arose. Just sayin.

I never thought that game would be easy. And I am never satisfied halfway through a game. Tom Brady IS a great QB. The New England Patriots ARE a great team. Bill Belichick IS a great coach. That Julian Edelman catch WAS out of this world.

In the end they deserved it.

As I mentioned yesterday, people in America overwhelmingly wanted the Falcons to win. Friends tweeted and texted me that they were at parties or bars where everyone – in some cases literally every single person – was cheering for Atlanta. Sadly, that doesn’t put any points on the board. It does, however, make many of the things said in this piece very, very true: NOBODY is happy for the Patriots.

It was tragic and it was sad. I actually cried – real tears – not immediately after the game, but maybe an hour or so later.

We were in the perfect company. With another couple surrounded by amazing food. Once things started to spiral, the silliness ended, the joking was pushed aside, the room got quiet.

And the food! Chips and dip, mini pizzas, veggie chili, crudités, nine layer dip, fruit platter, barbecues hot dogs. This was literally my favourite meal ever. They even sent us home with leftovers. And icy squares. Which I ate for breakfast today. Whatever.

My carrot cake was fine, but I hardly tasted it. It just sat on the plate in my hand as I took a forkful every couple of minutes. We ate it post-game and now it just feels like a bad luck charm so I’ll probably never make it again, but that doesn’t mean you can’t. (Everyone else said it was great. Outstanding was Kevin’s word for it.)

I took the recipe from Canadian Living and it can be found here. It’s super easy.

Now. I’m going to talk about something else now. Decluttering. I’ve been sharing my daily Minimalism Game posts on Instagram and adding to an album that I created on Facebook. Lots of stuff is on its way out the door and it’s been a good practice overall.

I mentioned yesterday that there aren’t a ton of gains to be had from my closet because I practice going through it frequently and even assessing each piece of clothing as I handle it for washing (okay, sometimes) and getting rid of it on the spot if I haven’t worn it, don’t feel comfortable in it, or if it doesn’t “spark joy” or whatever. My closet it where I am most efficient at keeping and getting rid of things appropriately.

Or so it seemed.

Ironically, I realized this week, my closet is the only place from which I also feel regret for having lost things. In today’s context, I’m referring to fan gear.

Leading into the Super Bowl, I had none of it. It seems that over time almost all of it had been decluttered and sent to the streets. Likely because I hadn’t worn it in a certain amount of time or because it was somehow rendered useless to me. This weekend I felt deep regret at having lost all of that and it made me sad to reflect on the catalogue of things I’d owned and memories of the people who’d given them to me or the places I’d picked them up. I would have worn all of it yesterday, damn it. ALL OF IT.

While I’m learning that there is pleasure in getting rid of things, I’m also learning that in some cases that shouldn’t be done in haste. I don’t know what the balance is, but I’m on the case.

So, yeah, we were supposed to still be in Washington today. Kevin was supposed to be going to WWE RAW tonight. Instead, we are sleeping late, cleaning the apartment and starting to pack up in preparation for the move.

Was thinking about you on Sunday, what a tough way for any team to lose a game.
Congrats on the move – 22nd floor, you’ll have such great views. Good luck cleaning and purging. I love the ability to simplify everything before my move a year and a half ago. And living with so few things recently will definitely give me perspective when moving back in and unpacking at the end of the month and, again, seeing what I can live without after not having it.