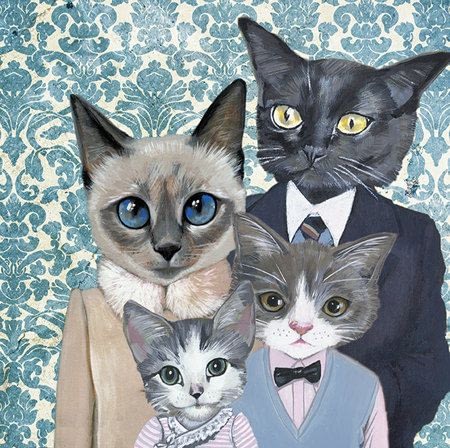 This piece “Family Portrait” is unavailable, but find more from this artist,
Heather Mattoon in her Etsy store

Family Day. An extra day tagged onto a weekend with the intention of having families spend more quality time together and/or having a statutory holiday in February. Depending on whose account you read, Family Day sometimes comes across as an intention that found a date, but more often it seems a date that found an intention – that people felt it was too long between the New Year’s holiday and Easter .

Fun fact: Alberta was the first Canadian province to celebrate Family Day and they did so beginning in 1990. The next province to join then was Saskatchewan, but that wasn’t until 2007!

BC’s Family Day is celebrated one week earlier than Family Day in the six other Canadian provinces that celebrate it. Initially the Premier had aligned the holiday with the rest of the country, but the decision to designate the holiday for the second Monday in February was determined by a consultation on what BCers preferred. Ever since, the holiday has brought with it great debate and suggestions that it should be changed.

Fortunately, regardless of the origin, many communities have taken the opportunity to develop traditions for celebrating the holiday and, true to the name of the holiday, bringing families together with both each other and with other families. Nothing wrong with that!

We are going to take in a movie and then do some meal prep for the week. Nothing particularly celebratory, but we have a big week ahead so we’re taking advantage of the extra day off in the best way we can.

I woke up around 6am this morning and when I walked into the living room, the clearest blue sky was impossible to ignore, helped along by the moonlight that flooded the room. It was gorgeous.

We’ve started to think of the things that we will miss about this apartment once we have moved and the view is certainly one of them. Also, the fact that we get morning sun in the new place. Here, we had sun from early afternoon straight through until sundown. Switching that around is going to take some getting used to and I’m worried about my garden, but I’m sure it’ll all be wonderful in different ways.

This week we are officially starting our half-marathon training with the intention of preparing for June’s Rock ‘n’ Roll Seattle event. It’s exactly one week after our wedding so I suppose you could call it a honeymoon run (our runnymoon?) We found a sixteen-week program that seemed a perfect compromise between the 24-week (too much!) and 12-week (too little!) options that we’d seen before. I think we’re meeting some friends there and spending the weekend so it’ll be a good way to kick off our marriage…and preparation starts now! Well, tomorrow. Today is a rest day and, I’m not going to lie, I am killing it! Thankfully, things have warmed up here significantly so my treadmill running will be kep to a minimum. (Fingers crossed.)

Last but certainly not least, today is my dear friend Rebecca’s birthday. Oh, the places and things we’ve done/see/talked about over the fifteen years we’ve known one another. We should really write a book. Or at least have a podcast.

Valentines is my love language

I think being on a high floor will help with the morning sun. I had AM sun in my last apt but with the position of the building and being on the ground floor, I really only had sun from sunrise till 930/10am and with an extremely overcast winter, it was more like never. Being higher I feel you’ll have ambient light. In my experience you save A LOT on not having to turn on the AC because the apt will be quite shady while the sun is at its warmest. I’m quite happy to be moving (literally) to the other side of the street for some afternoon light, though.

What a sweet friend to remember my birthday in your post. And I love that photo of us, it sums up so many things about our friendship! One day we’ll figure out our podcast. 🙂

Can’t wait to get together and hear about wedding plans and the new home!