Valentines is my love language

I love Valentine’s Day. Always have. As a kid, as an adult, weekday, weekend, single, not single, all of the above. The funny part about saying that is that I’ve never been particular about DOING SOMETHING for Valentine’s Day, it’s more like I just love EMBRACING THE SPIRIT. Because we don’t generally do much. In fact, we never go out – too crowded, and I never ask for gifts – too expensive, (but, okay, I did ask for a spiralizer last year – I really wanted one and I just couldn’t resist when asked), and I don’t even yearn for any romantic gestures. I just like it – the pink, the red, the hearts of a cinnamon nature… 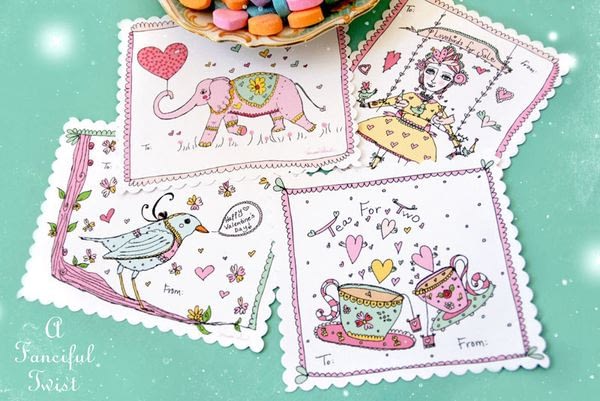 One of my favourite online escapes, A Fanciful Twist,
shared all of their downloadable (and free!) Valentines

Though I’d heard of it in the past, the first time I really came across Gary Chapman‘s “The Five Love Languages” was when it was discussed on the Happier Podcast last year. I was interested in the idea that each of us expresses love and feels loved in a different way.

The five love languages are:

I’ve recently read the book and it expanded on Chapman’s theory. While it’s focused mostly on romantic relationships, I can see how its applicable in relationships of every other kind.

For me, I’m a quality time love language kind of gal (and after reading the book, I believe in my pretty serious acts of service bent.) Kevin is also a quality time guy with words of affirmation coming in second. (I suspected both of those and confirmed them with him later.)

The discussion on the podcast was interesting. Both hosts identified words of affirmation as their love language and they proceeded to talk about how it’s probably the easiest love language to be partnered with. I remember exactly where I was exactly when I heard it because I reacted so strongly to their statements. Words of affirmation are anything but easy for me. I measure very low in that love language and, as such, I don’t practice it because I’ve never felt much appreciation for it. (They mentioned on a later podcast that they’d heard from several readers who said what I’d thought and recognized their error in judgment.)

Let me know what your results show. I’ll just be over here celebrating with some quality time with my office today and then hopefully a little tonight with my beau as well.

I did this last year, I think (year before?). Regardless, mine is also quality time with comes as no surprise. Since I spend so much time alone, it very much makes sense that love would be shown is spending time with other people…….even though I am very introverted. Reflecting on it, I believe I also value physical touch for the same reason. Living/working alone and especially living further away from friends and family and during the winter months when I am fond of hibernating, it can be weeks without any physical touch from another person. It’s very strange and makes complete sense as to why people need that, whether romantic or platonic.