Here’s another thing we like to do: explore our town. For Julie‘s birthday, she wanted to check out the home of her beloved Vancouver Canucks. So that’s what we did.

We arrived at Rogers Arena just in time for the first tour of the day and we were the only ones there. Bonus! We got registered up at the front desk quickly, were given lanyards with behind the scenes passes and we were ready to go! 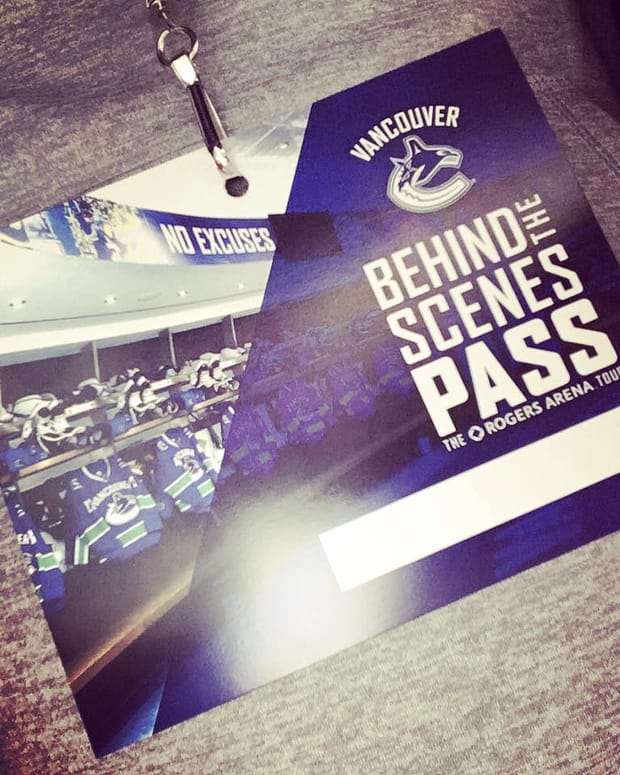 We left the team store and promptly got a rundown of some of the history of the building and what to expect from the tour. Since it wasn’t a game day, the arena was relatively quiet, though there was some filming going on so we did see a few people including players and coaches on the benches and on the ice. We were allowed to take pictures of and with everything we saw (including any players we might encounter), but were asked not to bother said players since they were, after all, at work.

We headed up to the 300 level to check out the Canucks dressing room display which includes memorabilia from the four Canucks whose jerseys have been retired and Trevor Linden’s actual dressing room stall from before the rooms were renovated in 2009. (He wore the same shoes to every single game throughout his career. Like, exact same pair. And they’re in that stall still. Gross.)

Next up, we headed to the Olympic display where Roberto Luongo waves the Canadian flag after Sidney Crosby’s Golden Goal at the 2010 Olympics. The wall features a replica of Luongo’s mask, his actual stick and a few other tokens from both the men’s and women’s tournaments that year.

When we finished there, we took the elevator up to the 500 level which houses spectator lounges including Club 500 – a ticketed area that offers several stations of various foods, bars and very loungeable seating, the press areas and media booths (no surprise that home is much comfier than visitors), the Canucks Alumni suite. From high up in the rafters, we got an impeccable look at the banners, a different angle on the jumbotron and a bird’s eye view of the ice.

For those of you who don’t know or may not remember, when Rogers Arena was built, the Canucks weren’t the only professional team in town. One of the more interesting parts of the tour for me was when we walked through the area where the Vancouver Grizzlies of the NBA used to be housed. The remnants of having a basketball team in town is that, still, sixteen years later, there are way taller than normal doors in certain areas of the arena. Here’s 5’10.5″ me underneath a chin-up bar in the midst of them. If you sit on one of the stalls in the former Grizzlies dressing room, your feet still out like a child’s.

After checking out all there was to see at ice level, we headed back up an elevator and to the 100 level before finishing off the tour. All in all, we spent about an hour and a half exploring the arena and I’d recommend it to anyone who is interested. Taking the tour also gets you a special 10% discount in the Canucks store on the same day.

Want to check out Rogers Arena? It’s $12 per adult ($6 per child over four, $8 per senior) and reservations are not required. For more information, check out their tours page.

To check out more photos from our tour, go to my album on Facebook. (Like my page while you’re there!)

Things we’ll do this month: March