She said, he said: LOGAN

So, here’s a relationship dynamic of ours: Kevin? He loves movies. Me? Meh. He likes to go to the theatre every week. I use movies as background noise while I write. I meet him part way by going to see shows with him semi-regularly. He appeases me by going alone more often than not.

This isn’t the only way in which our opinions differ. While we were watching the previews last night, I thought it would be fun to compare notes more thoroughly and since he has talked about writing movie reviews in the past, this would be a great opportunity to do both.

And an idea was born…

Here’s the first edition of movie review segment that I’m calling She said, he said.

I’ve seen my share of comic book hero movies over the past six years. Sure, I’d seen some pre-Kevin as well, but I’ve definitely upped my game (or had my game upped for me) since we started dating. Many a late Thursday night or early Friday morning I’ve been found sitting in a movie theatre surrounded by people far more devoted than I to watch one of the city’s first showings of a long-awaited installment of some franchise I’d only vaguely heard about.

Last night, we got into the 7:15 showing which was a blessing in a few different ways. First, it isn’t uncommon for me to get stuck in the office until ten or eleven on the night before I go on vacation so our tickets insured that I got out the door at a reasonable time. Second, I had definitely been fantasizing about couch and pjs since early in the day so the earlier the show, the sooner I’d be able to realize that.

First, the movie is focused on just a handful of people – a foursome of heroes, an army of villains. Like many, and even though I’d only just met him, I felt a little disappointed by Logan and what he’d done with his life as well. He was old and weathered and just wasn’t really living his best life. That’s the vibe of the movie throughout: Logan could have been someone better.

We’re quickly introduced to Charles Xavier, the founder of the X-Men, Caliban, a caretaker of sorts and then Laura, a little girl version of Wolverine (which is Logan if you don’t already know.) The villains are so villainous they don’t deserve their own descriptions.

So, heroes and villains. You know it all this plays out…

This isn’t a movie for kids. It was loud and it was violent and it was explosive and it was extremely intense. That surprised me a little since traditionally you’d expect to see young boys watching a Wolverine movie, but they’d be best left at home. In fact, with its R-rating, they wouldn’t even be allowed in. 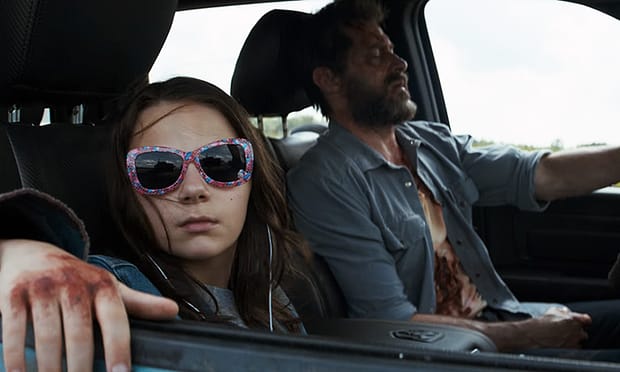 While there may not have been kids in the theatre, there were kids in the film. I don’t usually like kids in movies, to be honest, but Laura really grew on me. They never made her inappropriately cute or act in that quirky way that they do with kids – making them do or say overly adult things for a cheap laugh. She was stoic and she was damaged and she was haunting and she was really, really good.

And Logan, as you’d expect, got better. He grew as a person and restored some of the faith that people had felt robbed of. He, also, appeared damaged and haunting in his own way, but he starts to live again, he starts to inspire hope.

The cinematography was spectacular. This isn’t something I wouldn’t usually even notice, but it had a really huge impact on this movie. The way they slowed down some scenes and sped up others really added a lot of depth to the film. Jittery camera work made battle scenes more engaging and rugged cuts from one vantage point to another and back added to the feeling of action.

For a non-comic book fan like me, I didn’t feel like I was missing or had missed anything. The storytellers did a good job filling in the gaps with either actual explanations or obvious implications. I never felt out of the loop or wondered who was who or why they did what they did. The action was enough to qualify it as that type of film, but never over the top. (Okay, well, maybe in the final battle scene.) It had enough emotion running through it that I bought the story and it was well spaced in that it didn’t feel rushed in wrapping things up.

I found out later on that the film was set in 2029 which I have an issue with: I have a lot of hope invested in the snacks being much better by then. The stuff that Laura picked out in the gas station looked exactly the same as today and that would be a huge disappointment.

Overall, I would recommend this film for comic book fans and for those who love them. If you’re worried about getting wrangled into some nerdfest for your partner, this is the nerdfest you would want to get wrangled into.

On a scale of one to five, bad to good, Sweet November to Lost In Translation, I give it a 4.

I will try my best not to give any spoilers.

In 2000, Marvel treated us with the first X-Men movie and though it had its flaws it was by industry standards considered a blockbuster.  In that movie we saw for the first time Hugh Jackman take on the iconic role of Wolverine. During this film the Wolverine character was a work in progress but he managed to develop Wolverine’s “bub” catchphrase and showcased the competitive relationship between him and Cyclops. Overall, it was a very good first movie in the X-Men franchise and kicked off a series worth watching.

As the franchise grew there has been one consistent actor and character and that is Hugh Jackman as Wolverine. For 17 years and eight X-Men films, Jackman has been the only actor to play the Wolverine.  So when the studios announced that they would be filming another Wolverine movie last year, Jackman also announced that this would be his last time being the man with the adamantium claws.

The final Wolverine movie was released last night and it was titled “Logan”. Logan is based on the comic series “Old Man Logan”.  At first it was difficult for me to see such a strong character beaten down and haggard, but Jackman has been in this role for 17 years and he handled it with ease. The director James Mangold did a fantastic job showing how vulnerable Logan is and just how distraught our hero is with life.  Logan is not your typical X-Men movie.  Mangold allows the viewers and fans to see the Wolverine as he was meant to be seen: as a conflicted, vicious man who is battling his demons.

Logan is a fantastic movie, it treats fans to a different view of a beloved character.  After watching it, I rank this right up there with the Dark Knight that’s how good this film is.  It has everything from violence to humour to tears.  Logan is a roller coaster of emotions for the fans. Hugh Jackman could not have asked for a better way to end his reign as the Wolverine.