A little thing that is kind of big + my first chowdery

Oh. My. Word. I sat across from a woman using a new rose gold MacBook at Starbucks the other day. So compact. So pretty. I don’t often suffer from electronic envy, but whoa.

Yesterday was a pretty good, fun and definitely unhibernated day. We got up and ran some errands (with the move so recently behind us, it seems like we will never be short on errands to run!) then we got ready and headed downtown. We had family & friends in from back east and since we didn’t get it together enough to have overnight guests yet (the screws that hold the guest bed together have got to be around here somewhere…) they got a hotel room in the city instead. We were all heading to the hockey game, but en route to Rogers Arena, Kevin and I decided to take a detour and get something to eat before the game. I love my Maui Fire Veggie Dogs, but I knew they weren’t really jiving with my recent commitment to clean eating. Besides, a new chowder shop had opened up this year in Kevin’s work neighbourhood and he’s been wanting to try it for a while. 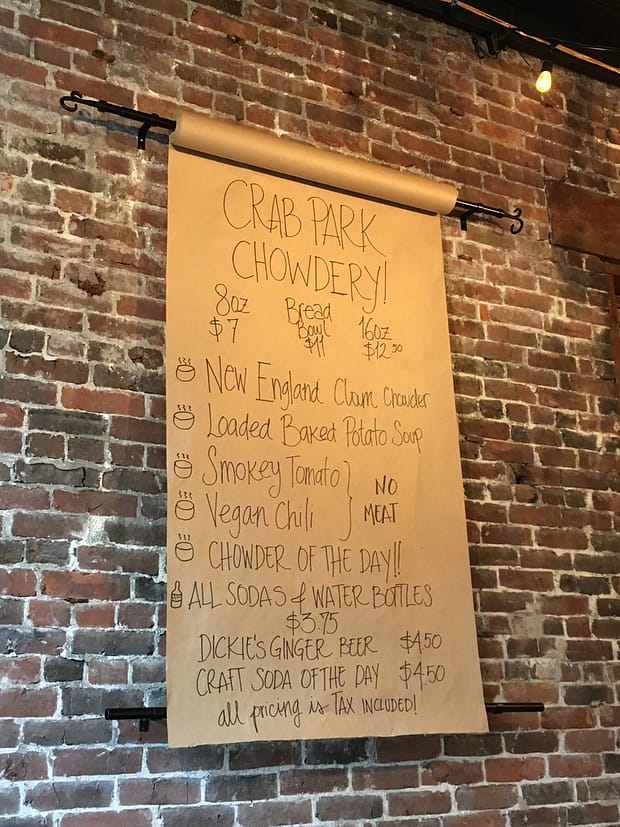 We took the four-ish block walk from Stadium-Chinatown Skytrain station and found our quaint little Crab Park Chowdery close to the heart of Gastown. It is a cute little restaurant with a lovely warm glow. I opted for vegan chili while Kevin had the clam chowder in a bread bowl. I adore their presentation on wooden board complete with a logo and spoon holder. The chili was good and served with a few small slices of bread on the side. I snuck a taste of Kevin’s chowder, though just enough to determine that it has a unique flavour to it, though not enough to name it. He raved about it. (We only found out later that they have some scrumptious looking desserts. Probably a good thing.) We drank water, but they had craft sodas (including, of course, Dickie’s.) Find Crab Park Chowdery on Facebook or Instagram. Or in real life at 221 Abbott Street.

March was a big month for us. A big, long, life-changing month. Sure, we’re mostly over Nick proposing to Vanessa instead of Raven and we’ve managed to move onto bigger and mostly better things. In point form:

Point one: this place is bigger, brighter, prettier, higher up and a million times better, but you already know about that.

Point two: from the moment we got engaged, all anyone said was, “do what YOU want to do.” One day, a few weeks back, we reflected on what our wedding was becoming and asked ourselves, “is this what WE want?” and “IS this what we want?” The best we could answer was “sort of?” So, we scrapped it.

My family: “What? But we wanted to be at your wedding…”

Others: “What??? I’m so sorry.” And then when I laugh about it, they look like they’re going to cry and then they eventually come around.

Amy: Totally, completely, 100% support in action. (I’m not really sure she even said a word.)

Honestly, we’re good with it. And someday I’ll probably tell you more.

For now, back to the drawing board…

Things we’ll do this month: April