On Friday, I discovered (rediscovered? I somehow have a feeling that this isn’t the first time I learned it…) that Easter isn’t a big deal in the USA. I mean, I’m sure it’s a big deal for some, but it isn’t a widely observed holiday like it is here in Canada. Here, it’s a holiday on Good Friday AND Easter Monday. For our neighbours to the south, nada. (Sorry for rubbing it in there on Friday, friends! I’d feel bad if you didn’t seem to prioritize holidays like the day after Thanksgiving instead…) 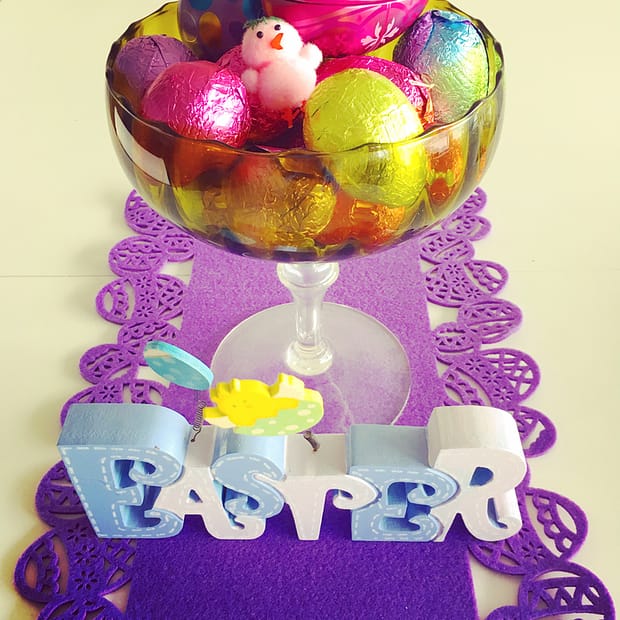 We had a little tea (actually coffee) party-esque Good Friday get together and that was a lot of fun. We bought an amazing loaf from Fratelli Italian Bakery (lemon and raspberry – two of my favourites, but taken to a whole new level!) and got out the good dishes (some – most! – of which had actually already been unpacked a put away) and welcomed our first visitors to the new place. We are far from finished unpacking and settling in,  but we’ve made enough progress that it was good timing. (Also, having just moved lends a certain amount of freedom to be messy that suits me perfectly.)

I was thrilled with this gathering – a lot because I enjoyed spending time with our guests, but also because it was the first significant coming together of something I’d been envisioning for a while. Last year, I started rounding up the vintage dishes that were circulating throughout the homes of family members on both sides. There were plenty in existence, but they were scattered throughout hutches and cupboards of my mom and my aunts. So, I started to ask around and it turned out that it was a common feeling that somebody wished someone would use the stuff, it just wasn’t going to be them.

It’s a funny thing, isn’t it? We all get our hands on these pieces that used to belong to the people who came before us – whether they’re dishes or anything else – and then we just keep them someplace without ever putting them to use. This is, of course, a practice that is becoming more and more antiquated as time passes. We are in a time when people are certainly more motivated to minimize and only keep the things they use or, rather, to use all the things they keep. Like others, I’m working to get better at that. For now, it’s antique dishes. Next, I’m going to get my grandfather’s vintage typewriter refurbished. Yay!

But, back to the dishes. This party was the first time I actually put into practice what I have been dreaming of using old dishes with new accents to create an eclectic feeling when hosting others. This was my first chance to execute my vision using my great grandmother’s dishes, my grandmother’s tea set and my own silverware plus a few modern pieces that I’ve collected myself. I was so happy!

Today, we spent the day mostly at home until we made a run downtown to pick up dessert for Easter dinner with my family.

Dessert is pretty much the worst part of a meal to put me in charge of. ????

I’m going to level with you here: I’m not that into desserts so asking me to be in charge of desserts is not the best idea. It’s probably the worst part of a meal to depend on me for. But we came through after picking up some minis (tiramisu, passionfruit & strawberry cheesecake, macaroon, lemon, salted caramel, london fog) from Trafiq Cafe and Bakery on Main Street.

I also picked up five of the most oddball ingredients – for me – at the grocery store to put together a recipe that is totally out of my wheelhouse, but one that is rich in family history. This was one of only a few things I have memories of my mom’s mom making and it hit my radar because my pal Laura over at Real Momma shared it on her Facebook page earlier in the day: Ambrosia Salad. Five ingredients (only one of them fresh), one action (mixing them all up), a final weird soupy marshmallow concoction that you’ll be forced to admit is delicious in spite of the fact that it is so very, very weird. (70s “cooking” at its finest…)

We aren’t a super conventional family when it comes to holiday meals, though barbecuing has become our own tradition in itself. Be it Christmas, birthdays – summer or winter, Easter and even Thanksgiving once, we light some charcoal and grill. Tonight was no different with beef, fish and plenty of veggies on the menu. If you get the chance to spend time together, does it really matter what you eat?

What are your family’s Easter traditions? What’s your go-to when you’re put in charge of desserts? What family heirlooms do you try to collect? Which ones do you avoid?