Top Posts
23 for 2023: things we’ll do this year
What should I focus on on in 2023?...
Milk Fed
My Happiness Project: February
Be your own historian
Post-vacation blues
Bad habits
Home alone
What’s going on in your community?
Quick turnaround
Home TDTFYH 2017 Stanley Cup – round one – part one

In case you haven’t noticed, I’m a sports person. I’m not one who professes to watch any sport because there are sports you couldn’t pay me to watch – golf, soccer, and I am totally not into the Olympics. Hockey and football are mostly my jam – the Atlanta Falcons are my football team and I have a few hockey teams. I know, I know, this bugs the crap out of people, but it’s true. I mostly classify NHL teams into three categories: love/hate/indifferent. Examples: Sharks, Blue Jackets, Predators, Maple Leafs/Canadiens, Bruins, Penguins, Ducks/Canucks, Jets, Lighting, Stars. (There are more in the indifferent category than in either of the other two.) 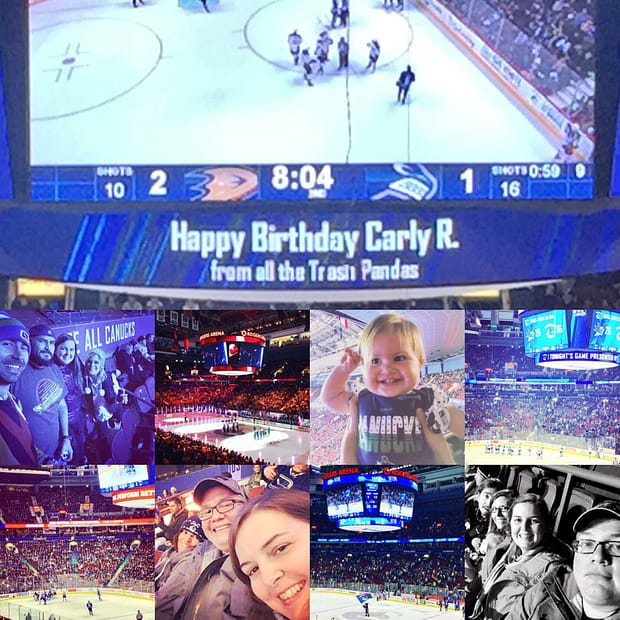 A collage of Canucks memories from the 2016/17 season

It struck me as kind of funny that I almost never write about sports here since we do spend a significant amount of time watching and keeping up with them. Now that the Stanley Cup playoffs are underway, I’ve had a lot of thoughts and opinions to get out of my head and I couldn’t resist. Here’s my totally unqualified breakdown of four of the eight first round series as teams embark on their road to The Cup. These are the series that are three games in already. Stay tuned for a post about the other four series tomorrow.

This is a real love/hate series for me in that I love #CBJ and I hate the Pens. Every April, my playoffs are basically hoping and praying that the day comes quickly when we no longer have to listen to constant  and inane commentary on Sid and that it happens before he is hoisting the Cup wearing a totally inappropriate MVP badge. Better luck this year…

I definitely went into this series hoping that the Blue Jackets would win a game or three. They’ve been such a wild card team this year. I was hoping they’d be young and inexperienced enough to come in firing without a care for what the critics were saying. They’ve been playing a very physical game and I like seeing that, but I’ve downgraded my expectations. They have everything to be proud of (a sixteen-game win streak is not too shabby!), but they just don’t have what it would take to get past the champs. (And losing Zach Werenski doesn’t help.) I’m still hoping they can steal a game just because they’ve worked really hard this season and they deserve it.

“It makes you sick just because you see him try to come back out and his eyes swollen up between the third and overtime and you know he wants to come back out, and what guy comes back out in that situation?” Blue Jackets captain Nick Foligno said. “I said to him, ‘I’m proud to be your teammate.’

Things I’ve not loved: Many Penguins fans have shown that they are less than gracious winners. Nothing turns me off a team more than a fan base composed primarily of jerks.

As interested as I am in the Columbus-Pittsburgh series, I’m equally disinterested in this series. I don’t like either of these teams so watching them is kind of a snorefest. All that said, one of the few predictions I made prior to the playoffs starting was that this series would be the real championship series. As happens with hockey, you sometimes get match-ups early on that are so gritty and intense, they end up being the kind of battles you’d wish for in the finals. (Think San Jose vs LA in 2014 – or any year, really.) I thought this could be one of those – and I’m not convinced yet that it won’t be. These teams are playing fast and highly skilled hockey that is punctuated by world class goaltending.

I haven’t watched enough to love or not love anything, really. I’ll make a better effort on Tuesday. I promise.

I’ll level with you: when it came to the playoff race and clinching and match-ups and getting a grip on what the post-season would look like, I didn’t even know that the Blues were in. I’d had high hopes for them to start the season, but every time I heard about them, it seemed they were struggling. Minnesota, on the other hand, they seemed to always exceed expectations

These two teams are quite evenly matched and that should make for a good series. I didn’t foresee it going the way it has with Minnesota still looking for their first postseason win and their backs firmly up against the wall going into game four. I would like to add that the series score betrays the quality of the hockey they are playing and the performance of the Wild.

Things I’ve loved: Joel Edmundson – he had three goals in 69 games this season and now has two in three playoff games including the game winner in OT of game one. Talk about clutch.

Things I’ve not loved: The Wild being down 3-0. I’m not a superfan or anything, but it’s a tough skip of the puck for them to be in in this position. Again, they’re better than that. And poor Devan Dubnyk. He’s had to fight so hard to get where he is. It would be a shame for them to go out quickly.

This series. If people had to pick the series that mattered most to me, they would say it was this one. The Sharks are the closest thing to a favourite team that I have, though that is waning somewhat since they traded my favourite player earlier this year. But, I do still like them and they have unfinished business from last year’s Cup finals. Edmonton is not a team I like, though they have risen in my books with the removal of Taylor Hall and the addition of Zach Kassian. Still, their fans aren’t the most fun (MOSTLY. I have a couple of friends who are good, decent hockey supporters) and that makes it easier to cheer against them. Interestingly, while the Sharks are the most promising of the two playoff teams I like the most, I honestly wouldn’t hate it (okay, at first I probably would, but I’d get over it quickly) if the Oilers took it. It wouldn’t be a surprise for this series goes the full seven game distance, but Edmonton does have the momentum with their wins coming in games two and three.

Things I’ve loved: Zach Kassian coming to play. He’s been through a lot these past couple of years and I think he is showing that he has grown from it. Curse the Habs for essentially throwing him away and kudos to the Oilers for giving him another shot.

Things I’ve not loved: Low scoring. There is plenty of firepower on both sides so I’d like see more goals. They’ve combined for eight goals in total and the Sharks haven’t scored since game one.

Tonight, there are four games on the calendar, all game three in their respective series:

More on hockey and my thoughts on the remaining four match-ups tomorrow.

Who is your favourite NHL team? What are your predictions for the first round?

I love sports too! I however would love to get paid to watch the Olympics 🙂 It’s funny I always feel like getting all athletic when I watch the Olympics. Do you like baseball or basketball?
FOOTBALL is my number one, COWBOYS!!
xo

Football is my other go-to sport. I’m a Falcons fan, though, so I’m still licking my wounds. 🙁

Teach me how to be a basketball fan. I really enjoyed watching the NCAA Final Four this year, but I can’t get into NBA. Any tips??