Was last night a crazy hockey night or what?!? Four games, four overtimes. And all but one ended the way I wanted it to, but the one that didn’t was so tragic it was hard to be happy about all the others. I know. Woe is me. 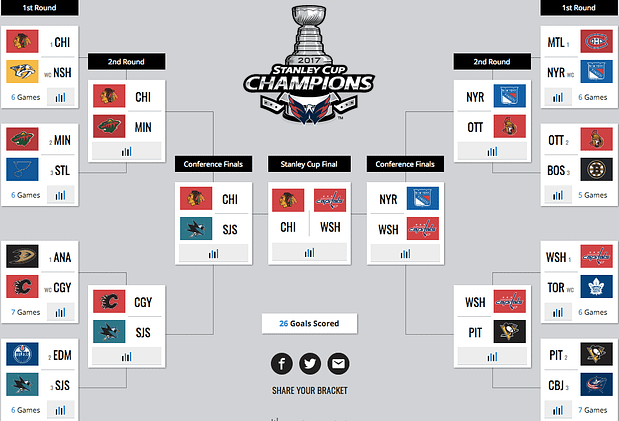 Yesterday, I shared my thoughts and feelings on the four NHL playoff match-ups that had already played game three in their best-of-seven first round series. Then I watched hockey all night long so that I could write about the remaining four series that caught up in their own series. Phew.

Let me start by acknowledging that, yes, I don’t know them off the ice and I would probably think they were perfectly fine if I met them in real life, but boy do I dislike the Ducks. Ryan Kesler, Kevin Bieksa, Corey Perry and the man who is like sand in a bathing suit to me, Ryan Getzlaf to name just a few. The only Duck I actually like is Antoine Vermette, but that is probably just a hangover from his days in Arizona and will go away sometime very soon (and especially if their playoff run carries on the way it has started…) and John Gibson showed me a side that I actually didn’t mind. I know the CBC crew didn’t like his response to getting chased from the net, but I did.

Let me also say that I have zero tolerance for complaining about refereeing. I think it’s the cheapest and ugliest way to absolve responsibility for losing. Want to beat the referees? Put the puck in the net. If you consistently do that, THEY CAN’T STOP YOU. However, I have seen a few instances in this series when I thought the refs weren’t really living their best ref lives. And it went mostly in the favour of Anaheim. I’m just saying.

And I like the Flames. I really do. I have a soft spot for their young and talented, hard-working group. They seem to find a way to (sometimes) make wine out of water. Just not in the first couple of games of this series. Last night was a different story and they came out firing, but they just couldn’t keep up the pace. The Ducks caught them and then won in OT. I was pretty sad when I saw the post-game commentary because I was feeling pretty proud of this squad. They played their best hockey of the series so far and they came up short.

Also, the Flames are saying all the right things.

“Just kind of live in the moment. Don’t think about yesterday or tomorrow. Live for today. Any mentor I’ve had has said the same thing: You can’t control everything. So control what you can, come with a smile on your face and do what you’ve prepared your whole life for.” – Goaltender Brian Elliott

What I’ve not loved: The talk has counted the Flames out since day one. I can’t see this series going much longer and my prediction is still technically possible…

You want to talk about jerky fans? (Okay, maybe YOU don’t, but I did yesterday. Twice.) Bruins fans take the cake. It’s so easy to want them to lose when you listen to the people who want them to not lose. Vancouver is really sensitive about Boston because of the whole 2011 Stanley Cup series. That doesn’t apply to me as a non-Canuck fan, of course, but, boy, do I get it.

I’ve been trying to like Ottawa more. They’ve always been a club that, on paper, I should like. Then they traded for my favourite player. Then they started sitting him. It’s been a roller coaster. In the end, I just don’t really care that much. Other than the wanting the Bruins to lose.

But, let me profess that I like Brad Marchand.

Things I’ve not loved: My indifference to this series.

Nashville leads 3-0
Who I took: Chicago in 6

As you can see on my bracket up top. I expected Chicago to go (almost) all the way. But I support the hockey hero from my hometown (he’s from Port Moody, not Vancouver, thankyouverymuch) and that makes me a Preds semi-fan. I also like the Preds because I think their “Keep the Red Out” campaign from a few years ago is genius. Prompted by this exact playoff match-up, the Predators put a block on out of state credit cards purchasing tickets to their games at Bridgestone Arena. They wanted to Grow the Gold in their home arena and keep people traveling with the visiting team away. I love it. As someone who has seen visiting fans obnoxiously take over a host arena (I see you Leafs fans in Buffalo, Oilers fans in Arizona and pretty much every team that visits Vancouver’s fans) and hated it, I really liked their efforts. Have they worked? I’m not sure. (And my opinion will probably change when I one day try to catch a game there.)

I wasn’t the only person to predict that the Blackhawks would be there. In the weeks leading up to the playoffs, I heard people predict Chicago representing the west in the Stanley Cup more often than I heard any other team. Back in February, they and the Washington Capitals were the favourites.

The Predators shut the Blackhawks out in the first two games. In game three last night, they spotted them two goals and still came out on top in OT.

Things I’ve not loved: Almost no coverage for this series. I guess that’s what happens when five Canadian teams make the playoffs.

Toronto leads 2-1
Who I took: Pittsburgh in 7

All of my own feelings about hockey aside, THIS is the series of the season in our house. You see, if you weren’t already aware (and you clearly don’t know Kevin if that’s the case) I am engaged to  and live with a lifelong Maple Leafs fan. And if you weren’t already aware, it’s been a long road for Maple Leafs fans. I’m not a Leafs fan necessarily, but I do have a soft spot for them. (And I’m totally baffled by the west coast OBSESSION with them. Seriously, many Canuck fans are more preoccupied with disliking them than they are with liking their own non-playoff squad – sorry, had to. I can’t believe it took me this long!)

I would like to pause and say this: no matter what happens in this series, this season has been a huge success for these young Leafs. They weren’t even planning on making the playoffs, you guys. Getting there and getting two wins is a huge victory.

Toronto has won the last two games in sudden death OT and it has been incredibly exciting. And totally nerve-wracking. My usually calm and laid back partner has turned into a total stress case.

I was thinking that I don’t really have any feelings about the Capitals, but then I saw an intermission interview and remembered that I LOVE TJ OSHIE. My other feeling for the Capitals is that I hate all the hate they’re getting. Everyone is all, “Haha! Presidents’ Cup trophy winners can’t win in the playoffs AGAIN.” Which is lame. But Don Cherry has a point about Evgeny Kuznetsov. Maybe he’s got some karma to play through.

This series is far from over and could very well go to seven nail-biting games.

Things I’ve loved: The Leafs winning brings a very celebratory tone to our home. I like that.

Some of these series will start wrapping up soon. When they do, I’ll be back with some thoughts on the second round.

What have you thought of round one so far? Is your bracket/prediction still intact?

I do not know much about hockey, but I have enjoyed going to a hockey game. It was one of the best sporting events I’ve been to, and it wasn’t even pro.

Hockey is sometimes really good and sometimes really bad. I’m glad you got a good experience. Was it the Silvertips? I saw them play once there and a few times here and it was a lot of fun every time!