Top Posts
23 for 2023: things we’ll do this year
What should I focus on on in 2023?...
Milk Fed
My Happiness Project: February
Be your own historian
Post-vacation blues
Bad habits
Home alone
What’s going on in your community?
Quick turnaround
Home TDTFYH Ginger mock chicken

When people talk about comfort food, I mostly understand what they’re talking about, but I don’t really get it, to be honest. I don’t know – I think I’m just not someone that really values food in the same way I see others value it. I have friends who truly LOVE food and I love going on foodie adventures with them and trying new restaurants around town and I truly do appreciate when food tastes really good, but they just have a totally different kind of appreciation than I do. They fall into worship for it, but I just kind of move on. Sometimes I wish I was more like them – that I could love the food the way they do or that I could feel the way a good meal appears to make them feel, but sometimes it’s plain old depressing. Sometimes I feel like I haven’t had a good meal in ages and I chalk that up to not having deep feelings for the food that I eat.

Here’s something about being vegetarian/vegan. There are some amazing and wonderful recipes out there, but there are also some pretty lame ones. I’m for ingredients lists that contain whole ingredients no matter what I’m cooking. I get it from my mom, but I’m not really into the whole can of mushroom soup, packet of french onion soup cooking style. I’m also not big on subbing in those processed stand-ins like veggies burgers, dogs, salami, pepperoni, etc. Most of the time.

There is one recipe, however, that gets me every time. I make it maybe once a year because it isn’t all that healthy – I mean the main ingredient is JUST THE GLUTEN after the starches from wheat flour have been washed away. But it serves as such an amazing stand-in for chicken or any meat, really. (If you’ve heard of seitan, this is it.) 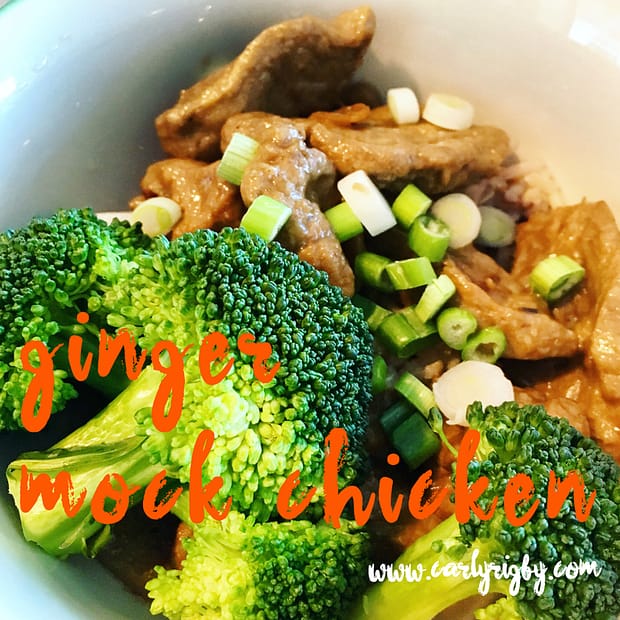 I can’t claim this recipe as my own. Back in March of 2009, Sarah Kramer sent me this recipe to test. I have no idea if it eventually made it into one of her cookbooks or which one, but I’ve continued to use it ever since. And to this day, I have no idea who Linda is.

Linda’s Ginger “Chicken“
This recipe has served as comfort food in the Sperling/Cuddington household for many, many years. It is good for colds, stomachaches, and bruised psyches. Enjoy! – Linda

The Mock “chicken” can be made in advance of the Ginger dish to save on time and will keep in fridge for 6 days or freezer for 6 months.

In a medium bowl, stir together the wheat gluten and water until it becomes elastic. Knead for 5 minutes and set aside. In a large saucepan, bring all of the broth ingredients to a boil. Slice gluten into 1-inch chunks and drop carefully into broth. Reduce heat, cover with lid, let simmer for 50-60 minutes, stirring every 10 minutes, until broth has reduced. In a large pot on medium-high heat saute the ginger in oil for 3-4 minutes or until ginger starts to soften and change color. Add “chicken” and saute 2-3 minutes more, stirring often to prevent sticking.  Add the soy sauce, cover pot with lid and turn down heat to medium. Simmer for 20 minutes, stirring occasionally to make sure the sauce evenly coats the ingredients. Once “chicken” is cooked, in a small bowl stir together the cornstarch and water. Add into pot and stir together well until sauce is thickened.

This is a recipe that I’ve kept entirely to myself until recently. The first time I made it and offered some to Kevin (or at least the first time he actually braved trying it) he was astonished and said, “that is REALLY good.” Um, yeah. When I made it again last night, we devoured it.

I serve it with rice and a side of broccoli. Perfection.