How was your Mother’s Day? Did you do something to celebrate either with your mom or as a mom with your little ones? Or both? Is Mother’s Day a day that brings up some complicated feelings for you? I found this image floating around my social media and I wanted to share it because I know that it’s a day that isn’t easy for many and for many very complex reasons. Whatever your relationship is with Mother’s Day, I send you compassion and hugs. ♥♥♥ 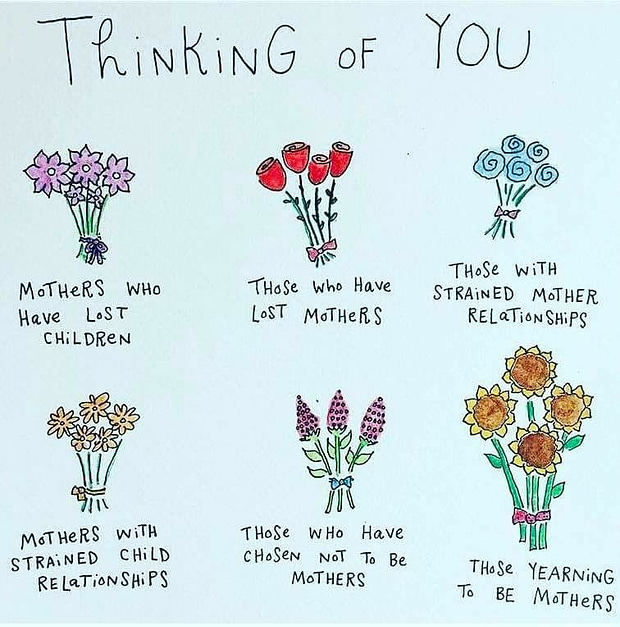 We took the Skytrain over to see my folks in the morning. We used a brand new extension to the existing lines and this was only the second time we’ve been on it, but it was pretty convenient and it made me feel deeply envious of the kids growing up near where we did. It would have been a dream for us to have such quick and easy access to so many areas when we were young! They’re done a great job so three cheers for Translink!

Many moms want to go to brunch to celebrate Mother’s Day or they want a new book or jewelry or perfume. Mine? She wanted to climb a mountain. So that’s what we did.

It was a pretty challenging hike, but the scenery was certainly worth it.

I’ve been talking to a few people lately who’ve expressed that they’re interested in blogging. As someone who has blogged on and off for many, many (early thirteen!) years, my immediate response is: YES! DO IT! YOU’LL LOVE IT! I love blogging and I tell everyone they should have a blog. Even if they’re not expressing an interest, I’ll sometimes bring it up. You know, if they have a cool story (who doesn’t?) or if they’re tackling some really interesting feat… “Hey, have you ever thought about blogging?” I  encourage all of my friends who used to blog back around the time when I started to take it up again and I try to  motivate others to get started. The returns from blogging have just been so rich that I want to share those rewards with everyone. I’ve met new people, established decades long friendships, I’ve learned about myself and about others, developed new skills. Heck, I’ve been published in a writing textbook at Ole Miss! Since I discovered blogging, I’ve rarely (if ever?) not had one on the go.

So, on my way to work one day last week, I was catching up on my podcasts – and thank god I walk for a couple of hours each day because I would never keep up with them if I didn’t – I listened to a new episode of a podcast I hadn’t heard in a while: Being Boss (a podcast for creative entrepreneurs.) They talk a lot about interesting aspects of the sometimes delicate balance between business and creativity, lots of marketing stuff and topics the personal side of running a business.

On this particular episode, they were interviewing a woman named Elizabeth Dehn, the creator of a website called Beauty Bets. She’s a woman I’d never heard of running a website I’d never seen. But, hey, that’s why I listen to this stuff, right? To discover new things. Long story short, Elizabeth runs a successful beauty blog (she took a pretty interesting path to get there so I do encourage you to listen to the episode) and I really dig her vibe. (But more on that tomorrow…)

She started as a blogger just casually writing reviews of makeup and cosmetic products and grew it into a much bigger project. Her site now includes a few more contributors and covers a variety of topics primarily beauty, style, spirit and wellness. When talk on the podcast turned to blogging, whether for the first time or reviving an old one (as one of the hosts revealed she was considering) Elizabeth had a few things to say including:

First, I want to commend you on doing something purely because you want to do it and not because it has some sort of quantifiable productivity driven end game.

To which she added:

The act of doing something that you enjoy for no other reason is a beautiful thing.

And, most notably, was this simple advice:

There is so much truth to those two simple words. If you want to start a blog, just write. It’s really easy to get caught up in overthinking themes and schedules and topics and tones and all of that can be exhausting. It is worrying about the future and thinking too far ahead when what you really need to do is just write. And keep writing. And writing. And writing. It comes together. It works itself out. Your voice becomes clearer. Your theme emerges as does your voice.

This is advice that I wanted to share with people who have told me they’re considering starting their own blog and those who have told me they are stalled with the one they’ve already got. I feel it, sisters and brother. I really do. My stumbling block is having a theme. I don’t have a neat common thread that weaves its way through my posts. I don’t do the same thing all the time, nor do I want to. That isn’t me and I’m a firm believer that you should be yourself in your online space (this is my blog – if I can’t be me here, where can I?!?) but at the same time, all that I am can’t always be tidily filed into an existing category. And I get hung up on that. It paralyzes me. And then someone tells me, “I love how you cover so many different topics on your blog” and I don’t believe them at first, but then I think about how that’s what I would want to read, too. Huh.

I’ve found that the real key to overcoming any of the obstacles that are keeping you from writing or growing your badass blog is really very simple and Elizabeth Dehn nailed it:

What gets in your way of blogging? Have you thought about starting a blog? If so, what’s stopping you? Let me if you do have an up and running blog – I’m looking for new ones to read!

The podcast I wish I’d created