I wrote yesterday about how I’d listened to Elizabeth Dehn on the Being Boss podcast episode 123 last week and that I really liked her vibe. The truth is that words can’t really describe how much I mean that. From the very start of her intro, I knew that she was someone who was going to have a big influence on me if for no other reason than that we are so very similar. Now, we certainly don’t have the same roots (she is the founder of a very successful beauty website while my interest in cosmetic products is of the strictly functional variety) but we got to the same place which is a pretty mainstream lifestyle with a seriously non-traditional wellness bent. Or, as she puts it in her bio on BeautyBets.com, “a hippie disguised in J.Crew.” I identify with that so much and have for so long. I was friends with all the super jock dudes in high school who called me Moonbeam because I could talk sports with them in class, but the rest of the time, I was their little flower child. An interesting dynamic to say the least, but one I’ve cherished as it’s come up from time to time throughout my life. Kevin loves that Moonbeam story and I think it’s because he can totally identify with it. Though I never dated those guys. You know, just for the record.

So, yes, Elizabeth Dehn launched Beauty Bets and it became and continues to be a huge success. Her most recent expansion took her into the world of podcasting and a sharp veer from the discussion of brushes and lipsticks. (Although, she really is so darling that even a non-makeup person like me can actually enjoy reading her makeup stuff.) It’s with the first season of her show called HEALERS where she welcomes a different guest onto each episode and gives the audience a thorough introduction into their particular specialty.

She had me at hello. 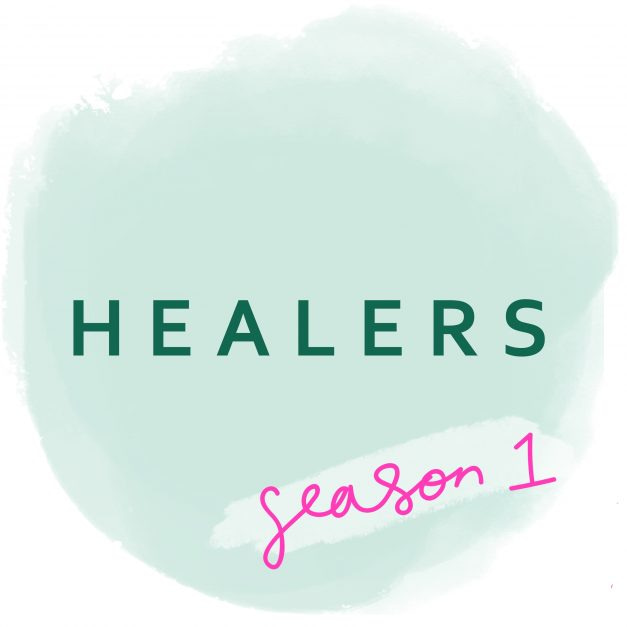 The day I made my discovery, I went home and downloaded every episode of the podcast. I was so thrilled that I made a sacred ritual out of listening and only played it when it could have my undivided attention (i.e. on my way to and from work, but not in the office or at home while I was doing something else and could get distracted.) Still, I was through the whole ten episode series in little over two days. It was fascinating and fantastic and I could have listened to one hundred more episodes. From each one, I learned, I was inspired and I had at least one takeaway.

There was an astrologer, a nutritionist, a, intuitive medium, a therapist, a pagan priestess, an aura photographer, a colonic therapist, a breathworker, a money & happiness guru and a home & life organizer. Doesn’t all of that sounds so great? Well, it does to me. And throughout each episode (35-45 minutes per) I felt – and I know it sounds hokey to say it, but – home, at peace, surrounded by people like me. And I don’t feel like that all that often.

Almost all of my medical care is naturopathic and I feel blessed that the specialists that I deal with are not only supportive of that, but actually encourage it. I’m open to many things and I usually jump at the opportunity to try something new. Acupuncture? I’m a regular. Floats? I love ’em. Hypnotherapy? I’ve even tried that. I think one thing that really excited me about this podcast was the chance to be able to add a few more things to my bucket list.

I loved the astrology episode the best (and I am actually in the process of booking a meeting of my own with Stephanie Gailing.) The episode talking to the founder of Less Mess. More Life. gave me some inspiration to tackle the bedroom that I haven’t really unpacked since our recent move (while giving me a lot to chew on about why I haven’t already…) and the chat with the founder of Move Colonics even has me seriously thinking about colon hydrotherapy.

As the world of functional medicine grows and we hear and read more and more about different kinds of non-traditional treatments and therapies, it’s easy to feel overwhelmed and not know where to begin. HEALERS opens the door to new things and makes it really comfortable to go inside, learn more and, most importantly, answers the question: where do I start?

BONUS: Don’t miss the Healers Handbook that breaks down show notes from every episode while adding actions and activities to enhance the topics and make it easier to bring them into your life.

What kinds of non-traditional care do you use? What kinds are you curious about?

Oh girl, welcome home! I’m so glad you are on this planet and beyond grateful for your kind words. You definitely are a kindred spirit! One more thing to add to the list: we’re both getting married! Congrats on doing it your way. All you need is love!