Happy Monday! Did you have an amazing weekend? Ours was pretty low-key. Most significantly, let’s just say that lacrosse season  made its return front and centre. Kevin played a couple of games and the team he manages played another. I passed on the trip to Victoria so that I could attend Veg Expo, the fourth annual event that incorporates all things vegan and vegetarian.

Veg Expo is a day of celebration where we introduce new, innovative, inspiring products and services that you can implement into your lifestyle and to meet others that share their passion. 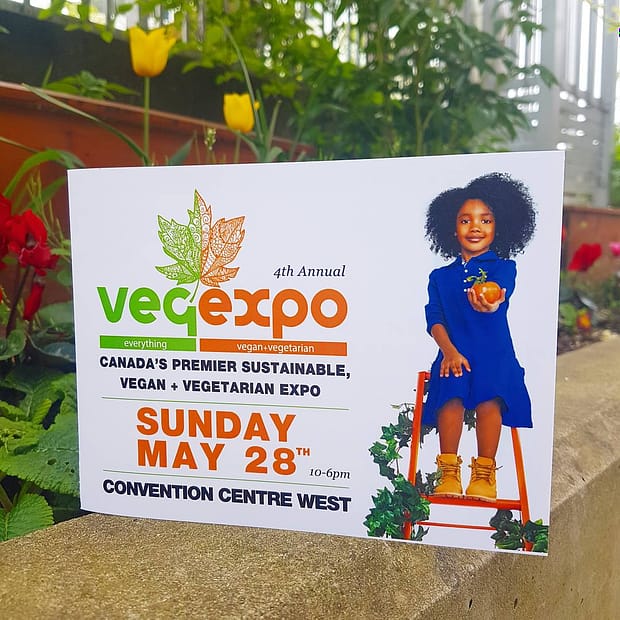 This year was the first time I’ve been able to attend and not because I haven’t wanted to before, but because I always seem to just slightly miss the boat. I usually become aware of the expo just after it’s taken place and spend the next few weeks feeling like I’ve totally missed out. If that’s you this year, stop reading now because I will tell you this upfront: we had a really good time and we saw (and sampled!) some really great new products.

The players
Me: a twenty-eight year vegetarian/vegan veteran who wishes that there was something like this available to her twenty year old self who subsisted on ketchup chips and other coincidentally vegetarian junk foods.
My girlfriend, Corrine: not a vegetarian or a vegan, but a relatively healthy eater who is open to new things and must be a little veg-curious since she readily agreed to go with me.

The preparation
We bought our tickets ($15 each) online quick and easy. On the day of, we met up on the Skytrain and took a ride down to Waterfront station. After a quick walk over and through the cruise ship tourism foot traffic, we arrived at Convention Centre West. The expo had opened its doors at 10am and we got there about half an hour later. It was pretty busy, but nothing compared to what it was like in the middle of the afternoon.

The event
Veg Expo boasted over 150 exhibitors and nineteen presentations on the stage. Exhibitors ran the gamut from gym chains to Doterra representatives, people putting their passion projects into reality and animal activist groups.

I’m in love with kombucha and there were plenty of local vendors there. My favourite was the mojito kombucha from Spark Kombucha. I may even go out of my way to hit up one of the markets they’ll be at this summer…and I’ll have an empty growler in hand when I do!

Purchase: For one, I signed up for Hello Fresh which I am so extremely excited about. For another, Vitality! I picked up a sample of their Digest+ product from Whole Foods last year and I think it only took me about a week to go back for a full bottle. As I told these locals today, their products have been a staple in our household ever since.

Booth: I loved the Routine booth. It was super pretty and nice to be around. The Marphyl booth selling phytoplankton grown in Richmond was very interesting.

Purchase: Cha Cha Chaga by Jump Up and Go Go.

Booth: Pranin. “I was close to buying the vitamin B booster powder. I liked it because it was easy. It was spread out nicely and easy to look at everything.”

Other: “I was truly amazed at how good all the dairy free ice creams were.”

My purchases (what can I say, I’d just been reading about seed cycling that morning!)

things we’ll do differently next year

Did you attend Veg Expo this or any other year? If you’re outside of Vancouver, is there something like this in your area? Which are your favourite vegan/vegetarian products?

I am a cheerleader

Things we’ll do this month: June