AKA things I should have already known

AKA things I’ll do better next time 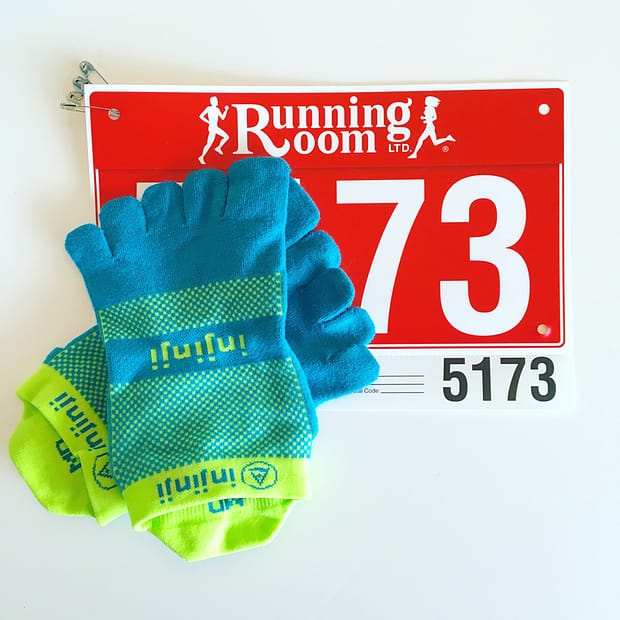 New Injinji socks – doesnt get better than that!

This morning, we headed to the second annual Tim Hortons Camp Day Run put on by our local Running Room. We haven’t participated in a ton of runs/races so this is the first time we’ve returned to one we’ve completed before. Last year, it was hot and steamy even early in the morning. We were sweaty messes by the end, but that was Kevin’s first ever organized run and his excitement and feeling of accomplishment was worth it. We’d had a really great time so it was kind of a no brainer to register again this year.

What is camp day?

In case you’re wondering, iconic Canadian coffee chain Tim Hortons raises money to send kids from low-income families to camps that they put on around North America. Every year, on Camp Day, they donate money from every coffee order to their Tim Hortons Children’s Foundation. This event is tied into that push to raise money.

This morning was cloudy and overcast, probably at least ten degrees cooler than last year which is aces in my books. We dressed, we fuelled, we headed down to start line and got ready to go. (Side note: we randomly ran into someone that I know through social media and it was a delight to meet someone new who I already kind of knew.)

The run went off on schedule and the route was very similar to last year’s. It was a trail run that we’ve walked several times, but we’ve only run it at last year’s Camp Day event. Out of the gate, I was the last one in the pack. That didn’t bother me much because I was more concerned about staying power than a fast start. I started passing people before my Runkeeper even told me I’d hit the .5km mark, but more on that later.

Most of the time when we are running, we’re just running. We are running for a certain amount of time or for a certain distance, but it isn’t anything super structured. On some days one of us will decide to go a little longer and other days we’ll shorten things up. When we are training, it’s just that: training. On race/run day, when there is a crowd around, it’s something different. It’s a competition and by probably a third of the way in, I was fumbling because my playlist just wasn’t right.

I used to rely on music when I run because I would use it to match my tempo. It got me in trouble because, of course, not every song on my list has the same tempo. So, I’d analyze my runs after the fact and see distinct drops in speed while slower songs were playing and then increases when the songs changed. (In case you didn’t know, Runkeeper will break down those stats for you.) It was a real bummer.

With a little work, I managed to shake that practice, but it became evident today that I’d become reliant on music in a different way. On regular training runs, it’s no big deal. I just keep running no matter what shuffles into my ear buds. When I’m more focused on my end results, I need a little more motivation. I need to hear songs that are going to pump me up and convince me to keep going and motivate me to work even harder. I really could have used that this morning.

I used my regular playlist in spite of thinking and even talking about putting together a top seven song playlist specifically for the exact duration that I was expecting to run today. Ugh.

My regular playlist has fifty-four songs on it because I hate doing the same thing more than once (rebel tendency) and I need my soundtrack to be different every single time. I love all the songs on my list. I mean, that’s the sole criteria that gets a song on the list, but I just love some songs on my playlist more. A lot more. And today, those songs just weren’t cycling through.

In the end, based on stats, my run wasn’t near as bad as it felt. But if it doesn’t feel good, it’s hard to understand why you’re doing it in the first place.

Of course, everyone has a bad run now and then. Onward!

Do you listen to music when you run or work out? How do you manage your playlist – same thing every day or a long list on shuffle?