This is a tweet I look for nearly every month:

I’m relatively new to gardening and I haven’t had a garden of my own that was actually in the ground since I lived with my folks nearly twenty years ago. For more than ten of those years, I didn’t even have a balcony so gardening was totally out of the question, but since then, in all three places Kevin and I have shared, I’ve made the most out of the outdoor space that we had. In our first place, it was a tiny porch. In our last place, we had a balcony that was slightly bigger. Now, we have a whole 150 square feet of opportunity and I’ve been using as much of it as I can. 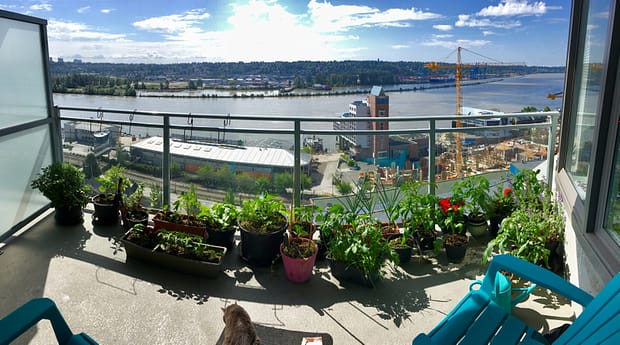 our gardens over the years

Last year I expanded into breaking actual ground in a couple of places beyond the containers. One was the limited space that was called the community garden at our old apartment. It was actually only about four feet of space in a raised bed in a communal area of the building. It’s an area that could be accessed by the public and that was a virtual dumping ground for people in the apartments above them. We were constantly finding old potatoes and garbage in our plots or the others. Once we started having peppers grow on our plants, they were constantly disappearing and that broke my heart. I would happily donate food to people in need (they often used this area to sleep in during the warmer months) but I somehow doubt they were the ones munching on my JALAPEÑOS.

My second space was one I called My Remote Garden. It was over in the backyard of some friends of ours and I owe all the credit of the arrangement to Keith. He was living in a house with another dude and they often entertained in the back yard, but they never actually used the garden. I think the whole transaction consisted of a text exchange exactly like this:

HIM: Hey, you like gardening. Do you want to use my yard?

Kevin did the heavy lifting, clearing out a garden bed that had been neglected for years and we tried several different plants in there. We weren’t as successful as I might have hoped, but we had a couple of things working against us: bad soil and pests we could never quite identify. We never solved either, but every year we get another chance, right? Due to some other commitments that I had, we haven’t started on My Remote Garden yet this spring, but we’re in the planning/watering duty negotiation stages right now.

One haul from My Remote Garden’s 2016 season

I took it as a great sign when on the first day we started moving into our current building, there was a notice in the elevator saying that if residents were interested in a community garden plot, they could email the committee. I did a few weeks later, but got a reply that said all spaces had already been assigned. The coordinator told me that he would keep that email and contact me if something became available. This past Friday, he let me know that not only was a space now available, but it was one of the best spaces out there! We checked it out today and we are definitely moving in!

So, all of a sudden, I have two garden spaces to begin working on. My kneejerk response was “BUT JUNE IS TOO LATE!” Sure, in some cases it is, but coaching and information sharing from the folks at West Coast Seeds has left me knowing better than that. Sure, there are some crops whose planting (from seed) window has passed, but there are still plenty of other options even now. I love knowing that a garden, when tended with care, can be functional all year long.

I encourage everyone to start a garden even if that means just one plant pot outside (or inside if you have to) their door. I refuse to believe that there is any such thing as a person who is bad at gardening. They probably just didn’t have their facts straight. 🙂 And there really isn’t anything as rewarding as growing your own potatoes, tomatoes, carrots, flowers, anything.

So, now, go check out the West Coast Seeds list of seeds to start in June, head out to your favourite nursery to get some seeds and get to work. Don’t let a small space get you down. And if you need a little camaraderie along the way, you know where to find me!

Where do you garden? What are you growing this summer? What have you always wanted to grow?