We’re all in this together: leadership lessons, sharing responsibility and trusting others

I woke up this morning to a notice of a new post from my pal Wilson at Lift Heavy Run Long. His post was called Simplify.  I read it in its entirety in its email format and then I thought about it all morning. Through my run, through my walk to work, through my morning routine at the office, through my lunch.

In it, he talks about he is an “an over everything-er”  and mentions too many letters, too many thoughts, too many words.

The part that really stuck with me was this:

Anyways, the gentleman with whom I was discussing the referenced quote is an attorney. A big part of his job is shortening words and simplifying the content, so that he might transmit the information to his clients in digestible chunks. I made it clear to him that I have not the least bit of desire to acquire his knowledge of the law, but I care do care that he knows how to interpret it. The same goes for my mechanic. I don’t need to be told how my brakes work, but I need for them to work when I press the pedal.

Today I am going to focus on simplifying my life a bit. I don’t know is less is more, but I think that less can be easier.

I appreciated everything he was saying, but it meant something a little different to me. Allow me to expand.

One of the most empowering lessons that has been shared with me throughout my careers came from Casey Cook. My relationship to Casey at the time was through the Western Lacrosse Association when he held the position of Commissioner and I was developing the role of Social Media Coordinator. Casey and I worked quite closely and he was a great supporter. I remember at one point when I asked him for the millionth time what he’d thought of something I’d done he explained to me that he trusted me without exception and that he believed that nobody knew how to do my job better than I did. He assured me that if I needed his help and authourity because some obstruction was preventing me from doing my job, then he would come to my aid, but that I didn’t need to check with him about everything.

It’s easy to read this story and get the feeling that I was being blown off and, at the time, I even acknowledged that in certain contexts, I was. He had bigger things to worry about in his own role and didn’t need to add micro-managing my tasks as well as his own. The last thing he needed was some dependent attention seeker who couldn’t make a decision to save her life. (In my defense, I was none of those things, I just lacked some of the confidence I grew into and wanted to know that I was on the right track through my formerly uncharted waters.)

At the time, I absorbed the compliment, appreciated his assurance and I carried on.

For years, Casey and I worked together in this capacity. We became quite close and continue to keep to in touch even now, years after we both resigned from our positions. I have so many good memories that involve him and the one thing I will never let go of is that professional structure that he modeled for me. Ever since then, I have thought about his leadership and tried to adopt his style. I still think of that interaction often and apply it in all facets of my life today.

Learning to let go and have confidence in someone else’s abilities is a gift to both the giver and the receiver. Believing in someone else’s abilities lets you hand over control helping them to become a more self-reliant partner. Trusting them with greater responsibility can leave you more room (and time!) to support and help them grow. Not only does it push them to rise to the challenge, but it also feels good to be in a partnership or on a team you can really trust and believe in. It builds closer bonds between people and makes better and more productive workplaces and relationships. 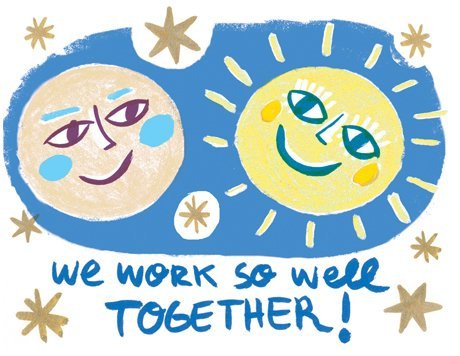 It’s like Wilson said: he doesn’t need to understand how his brakes work, he just needs someone who knows how to fix them. We don’t need to DO everything when we have the option to empower others. And learning that kind of trust can simplify everything. 🙂

Read Wilson’s post in its entirety. Thanks for sharing, Beefcake.

What was the best professional advice you ever received?