I’m super excited about this weekend because I get to do one of my favourite things. Run? Yes, I get to do that and I’m pretty into it. Travel? Uh huh. That’s at the top of my list. Okay, so this weekend it going to be filled with a few things I love. The one I’m most excited about, though, is the chance to get some more stamps in our McMenamins passports! 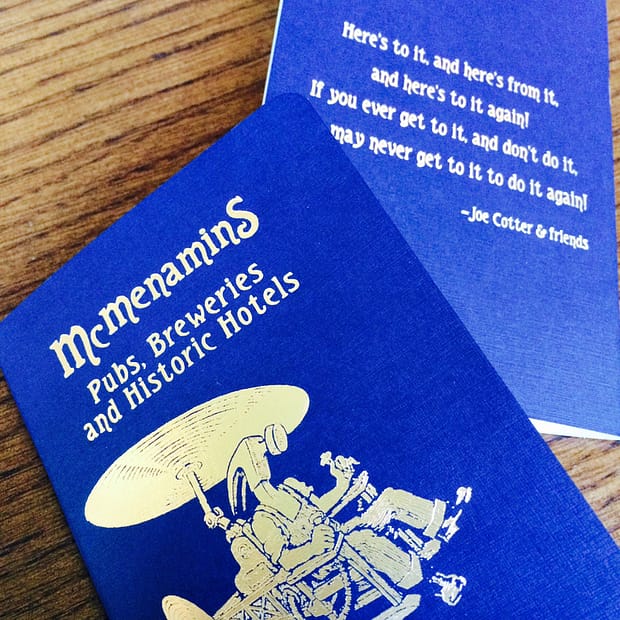 I’ve known about the genius that is the McMenamins franchise from my years of being an honourary citizen of Portland, Oregon. It was just last year that our genius friends, Amy and Tyson introduced us to the McMenamins passport program and it has been an absolute blast to work on ours since we picked them up.

McMenamins is a staple of Pacific Northwest American living, particularly Portland, Oregon. According to Wikipedia:

McMenamins is a family-owned business operating 54 distinct brewpubs,[5]breweries, music venues, historic hotels, and theater pubs in the Pacific Northwest. Founded by brothers Mike and Brian McMenamin with a single Portland neighborhood pub in 1983, McMenamins today includes 46 Oregon and eight Washington properties, 18 on the National Register of Historic Places. According to the Brewers Association, McMenamins is one of the top 50 largest craft breweries in the United States.[6]

According to me, that doesn’t even begin to cover it. Their venues are all extremely eclectic and very unique – unique to the chain, but also unique to each location. Their restaurants are cozy and their hotels are converted from old heritage sites – children’s schools, asylums – last year we stayed in two, a former brothel and a former Masonic old folks’ home. Their beers, wines and spirits are first class and their menu is legendary. When you arrive at a McMenamins, you immediately feel like you could just sink in and never leave – or you are drawn to exploring every fascinating corner.

I already knew all that, but it was fun to be there while Kevin discovered it, too. Our passports just added a new and exciting adventure into the mix.

So, what’s the deal with their passports?

It’s easy! You pick one up at any McMenamins property. They’re $30 each, but they pay for themselves in no time. Each location has one or a series of stamps for the passport owner to acquire. Mostly you just have to ask someone, but sometimes you have to do something, too. Take a picture, order a flight, buy a movie ticket… It’s basically a scavenger hunt! Get all the stamps in a location or a series of them, get a prize. Some of the prizes are food, some are merchandise, sometimes you get to pick. We’ve brought home a water bottle, a coffee mug, a pint glass and a tote bag so far. This weekend we’ll bring home something new after our stay at Anderson School, the revitalized first junior high school in Bothell, outside of Seattle.

From the first completed property in our passports,
Kennedy School in Portland

So, if you like to travel and you dig an adventure, plan a road trip through Washington and Oregon. Pick up your own passport on the way and have a great time collecting your stamps and other prizes. I promise you, you will have so. much. fun.

Writing is great, but living is better