Here’s an update on our garden space this summer: just when our massive balcony was being overtaken by very happy tomato plants (among other plants as well) of five different varieties (Black Krim, Green Zebra, Old German, Yellow Brandywine which is no longer on the site so not linkable 🙁 and my old standby, Early Girl – hollar at me if you need tomatoes this summer!) we were granted a community garden plot on the rooftop garden in our building. Hurray! And they’re serious about their plots at this community garden – ours is 161 square feet and the garden manager told me that it’s one of the best ones available. 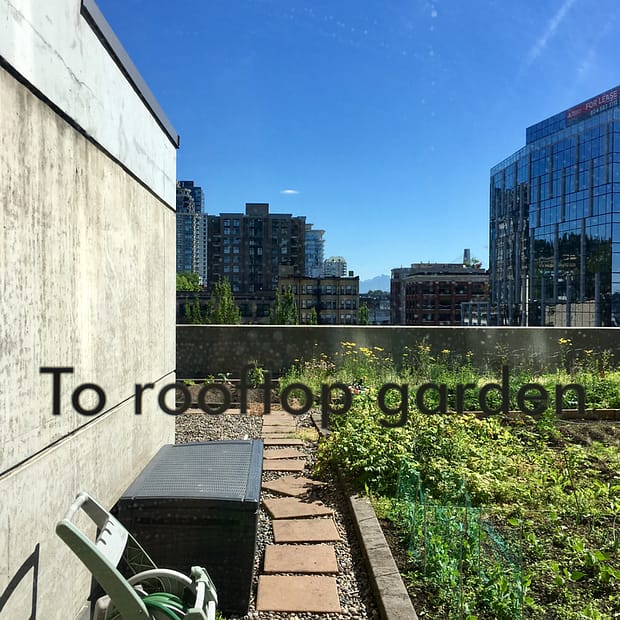 So, a few of the tomatoes from the balcony were transplanted which is good and bad. Good because they’ll have more space, etc, but since they were already blooming flowers, I’m a little worried that they might not adapt to the change. Only time will tell…and until then, I’ll lay awake in bed at night wondering about my tomato plants. That’s the bad because I’m only partly joking.

Earlier today, I saw that my favourite seed company asked on this Instagram post, “what are you harvesting today?” and it reminded me that a little harvesting had been on my to do list.

Last week I’d started to notice that my beets were getting quite big and busting up out of the surface of the dirt so I’d been keeping a close eye on them. Last night when I’d checked, I could see they were ready to go, but at the time I knew it was something I wanted to deal with when I could focus so I waited until today.

Last September, I told you how I go about raising my tomatoes and that once you grew some of your own, you’d want to grow something else. Today, I’m going to talk to you about beets.

First of all, it’s super easy. I’m going to give you a few pointers to make sure you learn the things that I wish someone had told me. No fear, okay?

Second, here are a few of the best varieties that I’ve tried over the years – Chioggia (the fancy candy cane looking kind that you sometimes see at farmer’s markets), Beet Blend which is exactly what it sounds like: a blend of different varieties in case you don’t want to choose just one (and there are a lot to choose from!) and Red Ace. The beets in the picture are Red Ace.

With tomatoes, I encouraged you to start them indoors early and only put them outside once temperatures had risen. Beets are the opposite. In fact, they do quite well when they get a cool start. That isn’t to say that you can’t start them in the summer – quite the opposite, in fact. If you have the space, you can start them every few weeks so that you are continually harvesting throughout the summer and into the fall. Their ability to withstand the cold just means that you can start them outside earlier and keep them going for a longer season.

Another way beets are unlike to tomatoes is that you’ll want to plant the seeds in the ground where they will grow. This is called direct sowing. With tomatoes, we started the seeds in little peat cups or egg cartons, but your beets won’t do well if you don’t plant them right in the place they will stay until harvest.

Now, remember I said it was easy? Well, I’m going to need you to think way back to when you were in grade school and planted beans. Remember that you dug a little hole in the dirt, put the bean inside, covered it back up and watered it? That’s exactly the technique you’re going to use with beets.

One caution: before you get started, you’re going to want to work the soil where you will be planting the seeds. Loosen it up and turn it over a few times. Make it as fluffy as you can. If you’ve bought some potting mix from the garden centre, then you’ll be good to go, but if you’re planting in a garden or a pot full of dirt that’s been kicking around for a while, then you’ll want to work it over first. What I’ve found is that if my soil is too hard, my beets will be more compact. And if you love beets like I love beets, the bigger the better! If you’re planting in the ground, you may want to add a layer of potting soil to your garden and work it in before planting.

Now that your soil is prepared, poke holes that are about one centimetre deep in the ground and make them approximately two centimetres apart. Pour seeds out of the package and into the palm of your hand then put one seed in each hole. Fill each hole in with dirt and then water the area.

You don’t want to water your beets too much or too often. If it’s raining, that’ll be enough to keep your beets going. If your area is in a dry spell, you’ll only need to water every seven to ten days.

Expect sprouts a week or so after you’ve planted the seeds and then watch them grow. You’ll want to do a check to make sure they aren’t too crowded together. If they are, decide which is the biggest, strongest plant and then pluck the others out of the ground. You can also just pinch the smaller seedlings back.

As your plants grow, more and more leaves will emerge and they’ll get bigger and bigger. At that point, the only thing left to do is wait. Most beets will take between seven and ten weeks to mature. You’ll know it’s getting close to time to harvest when the tops of the beets start to push up above the soil. Watch them and once they’re about the size you’re going for, then they’ll be ready to go.

To harvest, take a firm grip of the greens and gently pull them out of the ground. Cut off the greens (don’t throw them out!) and wash the dirt off the beets. You can store the beets in your fridge or another cool place. Treat the greens like you would any other dark green leafy vegetable – think kale, chard or spinach. Wash them off and store them in the fridge. Use them in a smoothie, saute them with some garlic or steam them up.

Have you ever tried growing beets? Do you have any tips to add?