Not me, Kevin. It’s unfortunate. And what’s even more unfortunate is that we don’t even know what he’s allergic to.

Several weeks back – it was the day before Mother’s Day, in fact – we were walking across town to pick up a gift for my mom. We stopped in at a locally owned cafe and grabbed a coffee for him, a tea for me. After waiting for my matcha, we set off towards our destination when Kevin stopped, asked me to hold his drink and took a selfie. Since he wasn’t mugging for the camera (not to mention he never takes selfies) I asked what was up. He replied, “my face is blowing up.” If you speak Kev Hill, you know that meant he was swelling up. (And what a quick thinker to take a photo to document it!)

At first I couldn’t see it so I asked if he was okay and if he wanted to go home. He said he felt fine except for the swelling so we carried on our way. By the time we got to the store, not ten minutes later, it was obvious that his lip was very swollen. We picked up what we were there for,p and headed back. Once home, I gave him a couple of my antihistamines and he slept it off. When he woke up later that afternoon, the swelling was mostly gone and he was feeling much better.

Right before we’d left that morning, we’d eaten some granola with almond milk. It seemed strange that he’d react to any of that since all of the ingredients were things we ate pretty regularly, but he was sure he’d felt it before we got to the coffee shop. He deemed the “killer granola” the culprit and I ate the rest of the beg myself.

Less than a week later, he called me at the office to report that the same thing had happened again. In between episodes, he’d paid a visit to the walk-in clinic and filled a prescription for prescription Claritin. In this instance, no killer granola. Just coffee. Hmmm…but who’s ever heard of someone being allergic to coffee?!? He took his meds early on in the swelling and felt fine in no time.

For several weeks there were no more flare ups. That was until the morning of our Rock ‘n’ Roll 5k in Seattle. First thing when the alarm went off – swollen lip. Again, he took his prescription and was able to avoid the full effects, but this time there wasn’t anything that could take the blame. We had literally just woken up and he hadn’t even had as much as water. Sure, we were in a strange place, but we’d already been there for more than twelve hours. We had no idea what might have triggered it. Luckily, his appointment with an allergist was scheduled for just days later so at least he had hope for getting some questions answered.

Spoiler alert: no answers. At least not about what was causing his lip inflammation. They did tell him, though, That if it happens again to bring in whatever he had touched and/or consumed prior to the reaction and they could analyze it and then test his sensitivity. Let me be clear: they would analyze a sample of the coffee in the cup, the cup itself, the plastic that makes up the lid, the granola from before, the almond milk. They’d analyze anything and then test whether he had reacted to any of it. Isn’t that fascinating?!?

He then got to undergo the part about which I was super envious – the actual sensitivity testing. I was so envious, in fact, that I almost considered going to his appointment with him. In the end, I didn’t want to be that girlfriend so I stayed home, but demanded photos of the whole process.

I’d heard about it many times before, but I’d never been this close. In case you don’t know how it works, here goes: the allergist pricks many tiny holes into a patient’s forearms, each containing a trace amount of a possible allergen. The patient then waits to see if they react to what they’ve been exposed to. Kevin, who had 52 tests done, was found to react to exactly half of them, mostly pollens, molds and inhalants. (But also chocolate! And COFFEE!)

Me, I’ve never had any allergic reactions. I suspect I’m developing a bit of hay fever as the years go on, but it’s still pretty mild.

Kevin said that the testing was torture because once he started reacting, he became very itchy and he couldn’t scratch for twenty minutes. Once he was done, they gave him some Benadryl cream, but it still took a while for the swelling to go down and discomfort to subside. 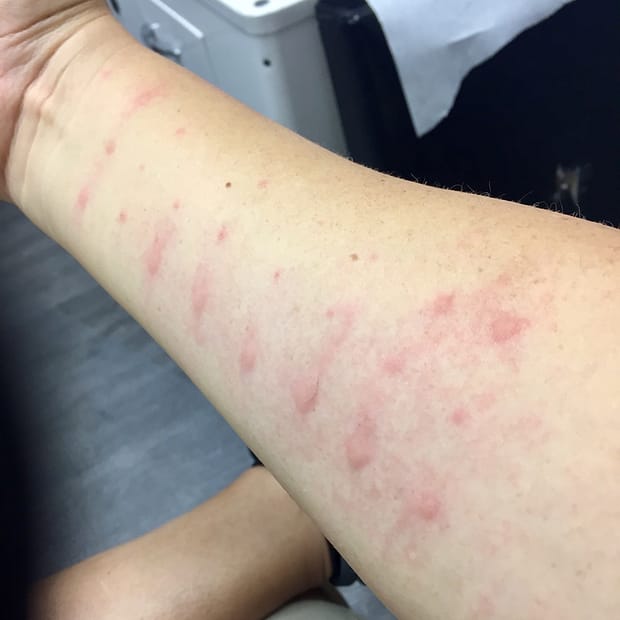 The bigger lesson from all of this, for me, was that I HAD NO IDEA WHAT TO DO WHEN SOMEONE HAS AN ALLERGIC REACTION.

If their response is anaphylactic, call 911 right away. Find out if they have an Epipen and administer it if they do.

If the response is milder, give them an antihistamine, a decongestant for sneezing, eye drops for watery eyes or hydrocortisone cream for a rash.

For more on how to respond to an allergic reaction, refer to this Healthline page.

Do you have any allergies? Have you ever had any scary reactions to food or the environment?