Things we’ll do this month: September

Oh, hi there. Did you have an awesome summer? Is it too early to talk about it like it’s over?

Of course, the sun doesn’t stop shining today nor does the temperature immediately drop, but, for me, the first of September is a dead stop to the feeling of light hearted spirit of July and August. (Though, for the record, I consider September no less fun.) Even though I haven’t been in school in <gulp> decades, the summer months are still just as jaunty as they were when they meant real freedom – from a schedule, from expectations, from work. It’s a blessing of our youth because it really does make summer a very special time for all of us, all throughout our lives. Even if you never have kids, summer break still maintains a certain kind of nostalgia – even when it isn’t an actual thing.

These days, summer actually means less freedom for us since it’s the time of year when Kevin is busiest outside of his regular day job – not to mention his other two side jobs. It’s lacrosse season and once upon a time that meant that we were constantly at one arena or another. I gave up my roles a few years ago and have never looked back, but Kevin’s have been ever evolving. Sometimes he’s coaching, sometimes he’s involved in an executive role and sometimes he’s playing. I don’t have to attend the majority of his commitments, but I do try to go to his games when he is playing. His busy schedule gives me a lot of time to do all of the things that I like to do (and spending time alone is very close to the top of that list) but it also means that he isn’t around which isn’t so much inconvenient, but lonely. I mean, I do live with the guy for a reason…

If you’re a regular here, you know that I took most of the summer off of writing on my blog. I largely scaled back my contributions on social media as well. It wasn’t a conscious decision, I just seemed to move away from it and I really couldn’t bring myself to fake it. I made plans in my mind to come back tomorrow/the day after/next week over and over again, but when I got really honest with myself, I just wasn’t feeling it. So, I forgave myself, I let it go and eventually, I decided that I would start again after the summer was over. Now, here we are. 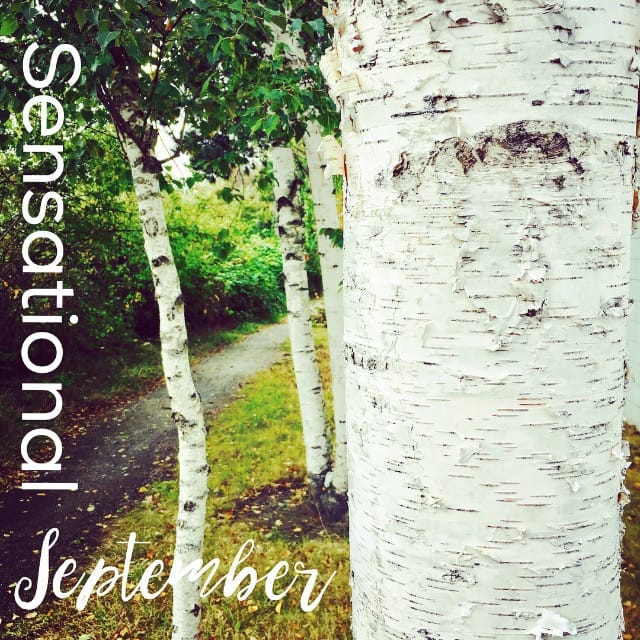 September. Yay! I always do my best to embrace the present and I certainly didn’t complain about the summer weather or my time in our multiple gardens or all the books I read or the fun adventures we took, HOWEVER, I’ll admit that I have been secretly looking forward to the fall for a while now.

I also have three preordered books (Bored & Brilliant, The Four Tendencies & Side Hustle) being delivered in the next few weeks. I’m obsessed with books and reading right now, in a way I haven’t been in years. I’m not analyzing the whys or hows, I’m just enjoying the ride…or the read, if you will. 😉

What else happened this summer aside from reading? Hmmm.

(-) I was sidelined for a lot of the time due to some medical conditions, treatments, etc. I managed to keep as active as possible, but my half marathon training is, let’s just politely say, behind schedule. Also, it got pretty boring.

(+) I reconnected with my local library. I don’t know how I’d forgotten that it was such a great place to hang out, but I had. The first day I went back, I watched as three siblings who’d just immigrated to Canada listened intently to how the whole borrowing process worked and celebrated their new library cards. Around the corner, a woman helped her young grandson sound out words as he learned to read. That visit reopened my eyes to all the magic that happens in a library.

(-) Cucumbers. Dahlias. Purple peppers. …all my crops that really disappointed. (Garlic was someplace in between. Not a total disappointment, but not as thrilling as I’d hoped.)

(+/-) Kevin had a really strong finish to his lacrosse season and got to travel with his team back east to the national championships. The long and arduous tournament was being held in his hometown which gave him a chance to connect with family, friends and loved ones he hasn’t seen in a while. (+ for him and the experience, – for me and being at home alone for ten days. For the record, I am SO ready for him to get back on Monday.)

It’s just over one year since I started my Things We’ll Do This Month initiative – a monthly list of fun, exciting, adventurous and enjoyable to do items. I found that the list helps slow down time by breaking up all the errands and must dos that tend to occupy too much of my attention. By planning a list of things I/we will actually like doing, it lets me mentally separate the mundane tasks of the everyday by punctuating them with happy tasks. September 2016‘s list included a few things that will make a reappearance in 2017.

Here’s what I have planned for us this month:

I’m excited for September so that we’ll be able to slow down a little and get into more of a routine. There’s been a lot of coming and going all summer so it’s been tough to maintain our exercise and eating routines. Getting back to work and back to a calmer state, we’ll be able to focus more on our bodies and preparation for our Rock’n’Roll Las Vegas half marathon goals.

Then tell me about your September! What’s on your agenda?

You are the company you keep

September is the other January