Top Posts
23 for 2023: things we’ll do this year
What should I focus on on in 2023?...
Milk Fed
My Happiness Project: February
Be your own historian
Post-vacation blues
Bad habits
Home alone
What’s going on in your community?
Quick turnaround
Home TDTFYH The banana and the bumble bee
TDTFYH

The banana and the bumble bee

Yesterday was Kevin’s birthday. As a general statement, I feel pretty blessed to have him in my life. He makes me laugh and gives me perspective in many situations when I desperately need it. He is equal parts calming and daring, both in ways that are totally opposite my instincts. My world is significantly better for having him in it. Naturally, I wanted to celebrate him so I gave him the opportunity to shape the day with whatever plans pleased him. Including hours spent watching him set up his new Apple Watch. And lunch at the pasta place he loves and I think is totally overrated. I know. Girlfriend of the year over here. 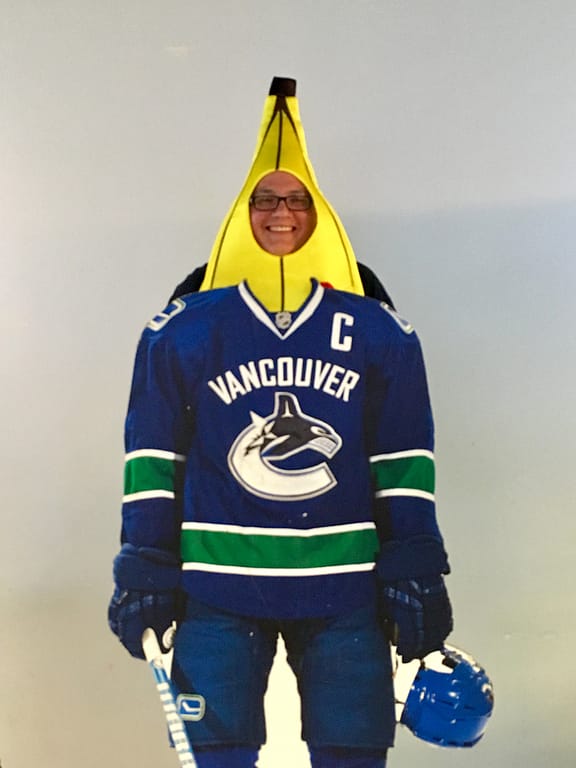 Earlier this fall, Kevin won Canucks tickets and carefully selected the game on his birthday to attend with them. He approached me a few weeks ago and declared that he’d chosen his Halloween costume which wasn’t completely out of character, but it wasn’t exactly in it either. At the time when we ventured out to purchase it, I thought these two things were unrelated. Even when he texted, “I’m going to dress up for the hockey game.” I thought he meant a suit. Duh.

Eventually, I caught up on his thinking and realized that he meant dressing up in a costume because that’s what people do at the game before Halloween. Or so he said. I’ll admit, I wasn’t entirely convinced until I saw this.

Coming to the game Monday? Wear your best Halloween costume and you could win a $200 gift card to the @TheSportsbar_RA! pic.twitter.com/GYEKgnZGpj

So, there we were, the banana and the bumble bee taking an awkward Skytrain ride all the way downtown without a single other costumed traveler, walking around the plaza at Rogers Arena where Kevin got heckled by some ESL kids who swore they’d eaten him for breakfast and there was not even a glimpse of another insect or piece of fruit. When we got into the arena, we were greeted by many staff members who declared, “You’re the first costumes we’ve seen tonight!” Huh.

Eventually, we encountered a reindeer and a cat and a few kids doing dress rehearsals for the next night, but there certainly weren’t a lot of people in costumes. Luckily, we were having a great time in ours with just the company of each other. We were approached by a couple of women managing the costume contest who asked if they could take a picture with us. Who were we to refuse?

Later on, they caught up with us again and asked us to come down on the ice as part of the costume contest. The whole idea was that we’d be out there competing with three other pairs of fans and the crowd would vote on the best costumes with their cheers. In my opinion, a bumble bee isn’t exactly costume contest calibre, but maybe a banana was. I mean, people really liked it.

When we first talked about it, my immediate reaction was I AM NOT GOING ON THE ICE IN FRONT OF 15000 PEOPLE, a sentiment that Kevin echoed. When the opportunity materialized, he changed his tune completely. I was a little more stubborn, but his enthusiasm was contagious. I took a deep breath and committed.

We met up with our competition and were ushered to the basement of the arena. We got suited up in ice cleats and awaited our moment to shine. As we stood there, I had one of those moments when everything around me just ceased to exist and all I could do was laugh – at what was happening, at what we were doing, at how in this life I share with Kevin, I could never actually guess what might happen on any given day. It reminded me of that time we stumbled across a Wrestlemania launch party and ended up with ringside seats on the streets of Orlando. If you just roll with it, life will take you to some pretty great places, I tell you.

I won’t keep you in suspense – we didn’t win the contest. We lost to a penguin and his partner, an adorable, though confusing, ocean-themed paper bag princess-esque girl. In fact, it’s hard to rank which place we might have been chosen. (See point #3 below.) And we both said one dumb thing each.

Here are a few reflections on our on-ice adventure.

Truth is, we went down just a banana and a bumble bee, but we came back Rogers Arena famous. Everywhere we went for the rest of the night, people greeted us with comments like, “you should have won,” and “we cheered for you,” and “happy birthday, man.” We were high-fived and people talked to us everywhere we went. It reminded me of one of my secrets of adulthood, people really want you to shine (and will help you do so!)

Extra added bonus! Being out there on the ice was totally responsible for us connecting with a friend I hadn’t seen in YEARS and we got to share a Skytrain ride home together catching up. There are advantages to dressing in bright yellow and that realization reminded me of this post by my friend Rebecca after a concert last week.

September is the other January