Happy new year! I know it’s late and I know it’s tired, but in my first 2018 appearance here, I just had to say it.

I, for one, was super excited for 2018. Not that I was anxious to get out of 2017 – it was a perfectly good year – but just because I had really big, strong feelings about this year. I’m excited to say that, so far, it’s lived up to my expectations. OF COURSE, not every day includes a victory parade, but all things considered, 2018 has been everything I had hoped for. 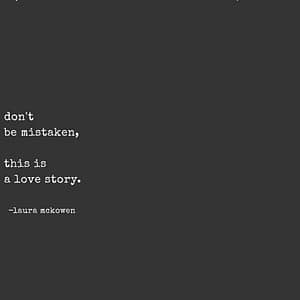 One of my big undertakings early this year has been a course called The Bigger Yes. Over recent years, I’ve had the tendency to shy away from formal learning experiences because they often don’t really fit my learning style (extremely independent) or my schedule preferences (at my leisure) but as soon as I heard about this one, it felt really meaningful to me. And I want to start doing more things like this. So, the day registration started, I dove right in.

The course started on January 3rd and, I’ll be totally honest, it has been more thought-provoking and life-changing – even within the first day – than I had ever imagined. But I LOVE this stuff.

I’m not going to give away too much about the work because I can’t, at this point, do Laura McKowen‘s curriculum justice, but I will say that if you’re interested in developing your experience of life, it’s worth devoting six weeks (though I suspect it will last much, much longer) of your life to it. But I will tell you this: part of the process has been to write a variation of your life story.

Have you ever tried to write your life story? Whew. It’s a doozy. In this exercise, we didn’t have to come at it with just a blank page and a pen – we had done some work leading up to it. Still, it was an experience. I laughed and I cried a little. And as I worked through it, it just flowed. With every word came more words. With every memory, another. And with every story, a new revelation about how it all fit together. And patterns. And tendencies. And with each piece fitting snugly into the puzzle, I learned more and more about myself. It was a deeply personal experience and not one that I would share here. So much of it felt precious and sacred. So much of it had been buried under everything that happened afterwards.

When I’d been preparing for this part of the project, I’d given fleeting thoughts to what would be included and what wouldn’t. How I would start, how I would finish. I’d thought of monumental experiences and meaningful events between the time I understood what we’d be doing and the time I was able to sit with it. When I actually had the opportunity to start writing, it was an extremely rewarding practice. I really enjoyed the process and the experience of walking through my life from childhood until now and I even learned a few things through the process.

The things that, at first consideration, stood out as the more important points in my life? Yeah, some of them didn’t even make the cut once I really dug into my life story. And some stuff that I remember as big things surrounded by even bigger feelings were things that I completely forgot about later on. I only stumbled upon some of my life’s dramatic highpoints by navigating the peaceful valleys that surrounded them. Some of the things that I stewed and agonized over are downright laughable today. Some of the people I’d assumed would play starring roles actually assumed merely bit parts or were completely removed. Some people I hadn’t given much credit at all, rose to the surface when I surveyed the landscape of my life.

Want to write your life story? I found some good pointers for you here.