Top Posts
23 for 2023: things we’ll do this year
What should I focus on on in 2023?...
Milk Fed
My Happiness Project: February
Be your own historian
Post-vacation blues
Bad habits
Home alone
What’s going on in your community?
Quick turnaround
Home Books Is listening to an audiobook the same as reading?
Books

Full disclosure: I’ve never listened to an audiobook. I like my audio in small doses. Short bursts like songs and podcasts. (I generally steer away from any podcast that runs longer than thirty to sixty minutes, though I have a few exceptions.) I just don’t really think I could enjoy drawing out the same story over eleven hours (the average length of an audiobook) even though it probably takes me much longer to actually read it.

But I am a book person. Over the years when I was really struggling with reading, I still felt the same romance with the pages and the covers and the plain old way that a book feels when you hold it in your hands even if all I did when I brought it home was put it on the shelf. 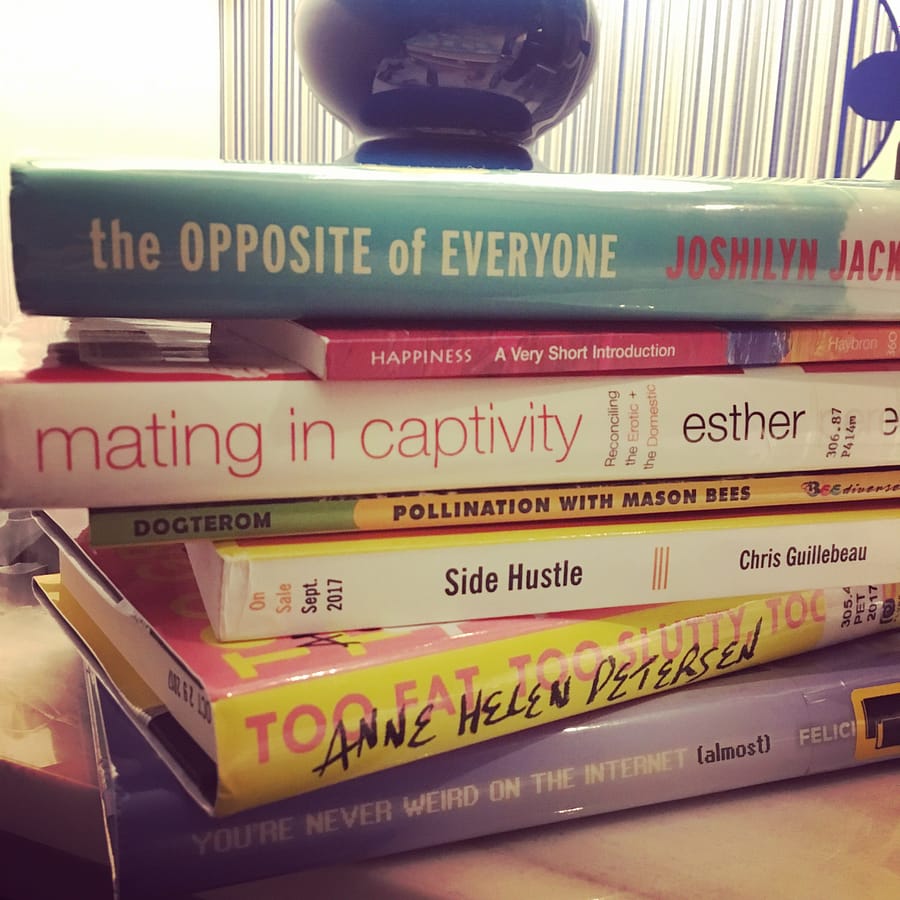 Kevin and I are opposites in this regard. He really isn’t into books. Over the last three or four months, he has been game to join me on my weekly visits to the library and has even checked out (and read!) a few books over that time. But he really isn’t into it. A book is a decent sized time commitment, he has enough on the go and in his downtime his preference is to grab his iPad to read online. To each their own. I did really like it when he was looking at books and I tried to encourage it as much as I could in any non-annoying way I could. (I’m sure they were probably still annoying.)

Fast forward to today’s trip to BC’s oldest library. As we were leaving, he asked me how audiobooks work. Since I had no idea, I told him to ask the librarian. He did and he got set up and he’s already a few hours into his first. He explained how it works to borrow and listen to the library’s audiobooks and it reignited some old internal debate for me.

Does listening to an audiobook count as having read the book? Hmmm.

Honestly, having people consume written words in any format is what really matters to me. I want people to read, buy books and support writers in any way that suits them best. I constantly struggle to carve out time to sit down with whichever book(s) I’m reading so I understand that audiobooks certainly fit nicely into a commute by foot, car or busy transit and can make the most out of time spent walking, running or at the gym.

Listening to all parts of a book certainly qualifies as consuming it, but is it really the same? There’s a gap there that I just can’t jump. That very well may be because I know that, for me, listening is not as meaningful as reading; that, for me, it really isn’t the same. Is it just a matter of personal choice? Up to one’s own preferred method of comprehension? When someone listens to an audiobook, is it fair for them to flip the title to their Goodreads “READ” shelf? School me, all of you who read with your ears AND those who read with your eyes. Does listening to an audiobook count as having read the book? If you’ve tried both, which do you prefer?

Alright. So. I used to not enjoy audiobooks. Now, however, I relish them. I commute 45 minutes to an hour each direction to and from work and a lot of it is in heavy traffic. Having a book being read to me makes the time go by so much easier and, if the book is really good, I actually can’t wait to get driving and have been known to sit in my driveway waiting for the chapter to finish. If the book is really good, I will also put it on while I fold laundry or have it playing over my waterproof speaker while I shower or over my headphones while I walk the dog.

I can’t listen to a book when I’m in any other situation because I can’t concentrate enough, my mind wanders, and I miss large sections of the book. I have tried to listen while I do mindless-ish tasks at work, but I am inevitably drawn away from the story and have to go back and relisten to find out what happened so now I don’t attempt that anymore.

I agree with your Facebook commenter who said that the narrator makes the difference. I have listened to a few where the narrator’s voice was grating and it was not as enjoyable as some of the narrators where they really bring the story to life. I have read some series of books where I started the series on audiobook and then finished it on paper and I absolutely found myself hearing it in the narrator’s voice.

Also, when reading fantasy, I always have to go look up how the character’s names are spelled because I can never guess it correctly from just hearing it!

All of this long commenting just to say that yes, it does count as having read a book because you have fully consumed the story and you can talk about the book to someone who’s read the paper version and, unless you’re getting abridged versions (which, NO), you had the same experience that they did.

It does take a certain level of concentration, though. More even than I think reading the paper copy does.

Thank you for your thoughtful response! I love that you argued almost the opposite – that it takes MORE focus than reading with your eyes. I’m intrigued
and I feel like I need to do any experiment!

P.S. I can totally picture your “how do you spell that name” scenario. I feel that way about the protagonist in The Paper Magician right now! Ceony? Say it like you see it? Is there a trick?

Also, I just added the Anne Helen Peterson book to my hold list from the library. And here I was happy that I had my checkouts in the single digits for the first time in forever.

Random thoughts:
I will count them in Goodreads but I am sure to specify the audiobook format.
I definitely do not prefer them but road trips have typically been the primary catalyst for me and I can deal with that.
Also memoirs or autobiographies read by the author can be entertaining. This works well with comedians, etc. as the writing isn’t usually top-notch and tends to be more conversational.
Joel used to listen to audiobooks on his drive to work until his CD player broke recently. Very disappointing for him. Luckily our commute will be reduced to 5 minutes soon.
I can read faster than I can listen. Also, my brain easily wanders when I listen.
I too often find myself annoyed by a narrator’s voice or some quirk of speech. Or when a narrator of a book I hated shows up on another I can’t get past it.
For a while I was doing audiobooks when I mowed the lawn, which is only a great idea if you want to damage your hearing.
I definitely prefer books and am currently on a library-hardcover kick but there are times I miss my Kindle Paperwhite. It doesn’t emit the same blue light our phones do (a no-no at bedtime). It’s also lightweight and very portable, good to load up for travel! The downside is that the local library switched to a delivery system that is app-based which requires a smartphone or tablet so I can’t really get words to my Kindle for free anymore. (I have no real desire to buy books. Space, money, and I don’t re-read anything.)
Fin.

From the bottom up:
I love buying books, but I’ve freed myself from my attachment to owning books. In other words, I can get rid of them without a thought. I only save a few that I will (or at least want to) refer back to.

Counting on Goodreads probably wasn’t a fair statement to make because you can say whatever you want there and if you cheat you’re only cheating yourself. I mean, I’m thrilled for you that you’re reading so much, but I wouldn’t throw a challenge flag to question whether one of your “reads” “counted.” BUT, how could you even measure the meaningfulness of whether someone read or listened to a book? A comprehension quiz? That would only support the fact we know, that people learn in different ways.

I did like what you said on Twitter about one being passive and the other active. I really think you were onto something there.