Top Posts
Milk Fed
My Happiness Project: February
Be your own historian
Post-vacation blues
Bad habits
Home alone
What’s going on in your community?
Quick turnaround
365 posts
Toronto – day five
Home TDTFYH Small changes: what actions bring me closer to being the person I want to be?
TDTFYH

Small changes: what actions bring me closer to being the person I want to be?

Change. I’ve said it time and time again, it’s something I (mostly) love. I like to do things differently every time – no repeats. I’m terrible with endeavours that require practice because I, quite frankly, just won’t. I like to mix things up and as I get older, it only become more severe. I went through a crisis of conscience when my new electric toothbrush tried to force me into some kind of routine with its insistence on thirty second rotations through four quadrants. (I never do it in the same order two times in a row. I win!)

Given all this, I also like to try new things. I sometimes call them experiments. I’ve done sleep experiments, food experiments, exercise experiments, meditation experiments, you get the drift. I try them for a week to start then assess whether I can take them deeper or tweak them. Not drinking started as an experiment and, as I type this, I realize it’s now been just over seven years since it stuck. I’ve found that trying small experiments is the best way to get the ball rolling on bigger change. It’s a bit of a “see what happens” approach. Do one small thing and see what comes of it. 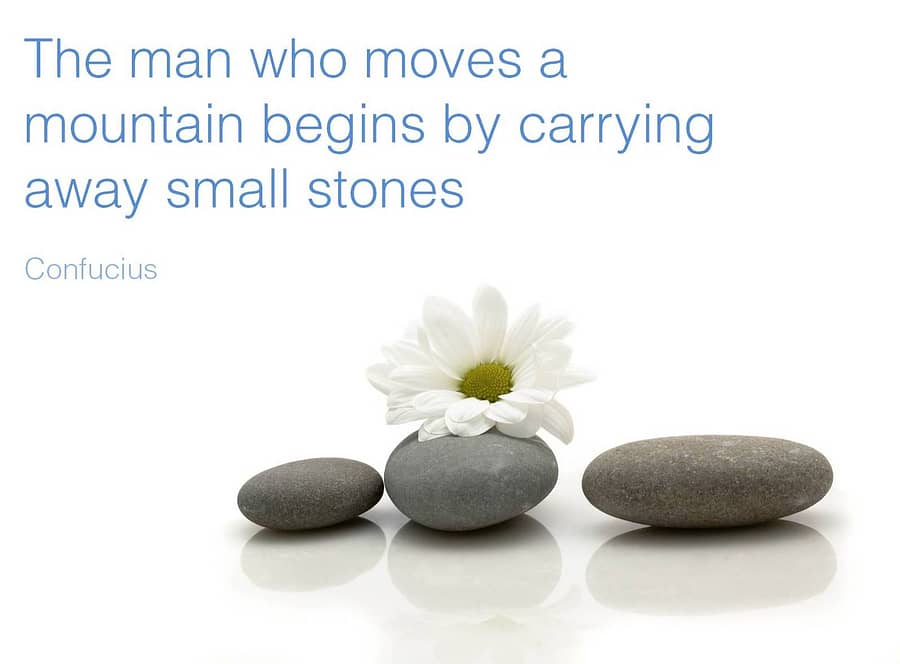 Earlier this week, my friend Amy announced to me and all her Facebook friends that she was taking some time to implement a longer list – and time frame – of small changes in the hopes that she will see bigger results. She told me later,

“For right now, committing to the process was more important than the end goal. I found myself saying, ‘I just need space to figure this out,’ so I’m just making the space.”

Little things done consistently. And I think she articulated it perfectly when she said she’s making the space.  Instead of crowding her actions with grandiose and super limiting behaviours, she’s embracing the things she wants more. We’re often exhausted by looking at the bigger results we desire – even when we don’t know what they are – without taking the time to try out some smaller changes and see if they will add up and make the bigger dream possible. For example, any time I’m changing my training routine, I take a week to take really good care of my sleep. If I’m well-rested, that’s how I know I’m best prepared to try something new. It’s different for everyone and I believe that the question we need to ask ourselves is:

WHAT ACTIONS BRING ME CLOSER TO
BEING THE PERSON I WANT TO BE?

If we do more of what makes us feel good, we’ll be happier and better able to tackle even more of the same. If we continue to feel better and better about ourselves, our lives, our worlds, we’ll be able to identify newer ways that we can expand that practice. If we are continually improving, that becomes contagious and soon others around us are also growing and expanding and we are all flourishing together.

You get the picture. For you it might be riding your bike or dancing or whatever it is that fills you up and makes you stronger. If we feel better, we do better. I’m convinced that if we meet our little goals, it moves our bigger goals closer within reach and, honestly, what’s the harm in putting my theory to the test?

Do you respond well to making little goals? Have you found that they contribute to your greater successes? What little goals could you make for yourself this week?

Things we’ll do this month: August