One of our cats is ridiculously old. Not according to Guinness, I’m sure and she certainly doesn’t live up to urban myth standards either. When I first got her, she was assessed as being at least two years old. She’d had a home, but she’d been abandoned, presumably left behind after a move. She was brought to Coquitlam Animal Shelter after a family had found they’d been feeding her for a month and didn’t think she had any place to go. Part of me can’t believe this misfortune of the people who gave her up because she has been a very good cat for most of her life. The other part of me is furious with the human tendency to just discard living beings that no longer suit their needs. (To be clear, I have a lot of compassion for owners who have to make the tough decision to rehome a pet due to financial or other issues. My point is that there are better ways than just letting them wander the streets in the hope that they find a new family to care for them.)

My girl. She’s been with me through many phases of life. She’s been beside me through many milestones and events. When I first got her, she’d sit on the windowsill of my apartment prompting passers by to call out to either admire her or worry about her jumping. She would never have disobeyed the rules like that. She was a cuddled from day one, but she did not want to be picked up, held and she certainly wouldn’t tolerate being carried around. She is lightning quick. She once opened up a veterinary assistant with an attack so quick nobody – including her victim – had even seen it. She is very sweet so long as you respect her demands. 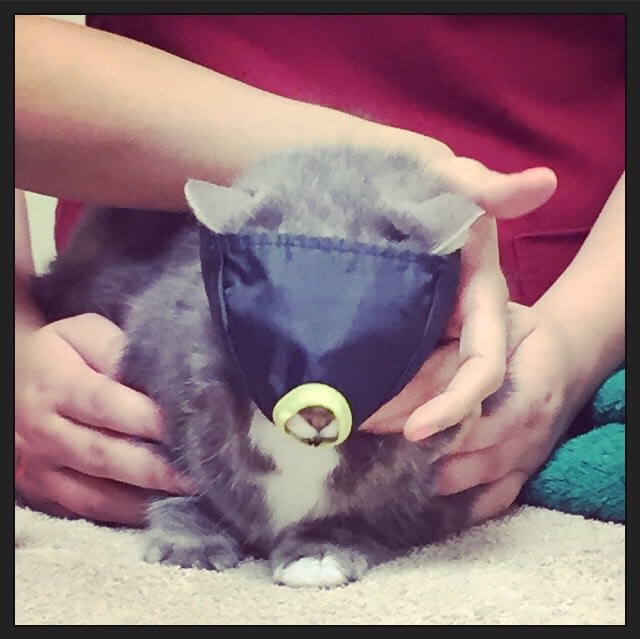 An alternate title for this post would be Things You Might Do If You Had a Really Old Cat. (These things may also occur with old dogs and/or other pets.)

Put up with Develop ridiculous habits. She insists on sleeping beside my head. I’m particularly proud of myself for thinking to put an extra pillow between mine and the headboard so that she could sleep there. This happened after I finally realized that if I didn’t she would continue to try to share mine.

She gets up and out of bed at least 7-8 times a night. She’s pretty small and stealth so the getting up isn’t really an issue if you don’t count the fact that she barrels over Kevin to do it. The problem is that she can’t get back into bed once she’s out and she also can’t bear to be or sleep anywhere else if a human’s in the bed. We got her stools for each side of the bed to help her jump up, but they had to be absolutely perfect to use (nothing on, leaning on or around them and positioned in the exact – and mysterious – right spot) and I’m not sure if they became imperfect or if she has lost her ability to jump even that much now. (She still uses them to get down.) Instead, she walks over to the floor below my head and lets out her pick me up yowl. She’s kind enough to continue until I’m awake enough to do it. What I’ve realized in the last week is that in many cases there are but minutes between getting down and getting back up again. Seven or eight times a night. I haven’t slept through the night in months.

Understand early parenthood. In many ways, having this old cat is like having a baby. She has trouble getting around and I’m pretty sure she’s lost her hearing (and at least part of her mind.) Often, while doing something in one part of the house, we’ll hear her crying from the bedroom or another area where she’s been sleeping. If we’re sitting in the couch, we’ll look at each other and know that one of us has to go get her or the screeching isn’t going to stop. It’s the kind of thing I imagine new parents doing when trying to assess what their bundle of joy needs to survive in a fussy moment.

Look for signs of health. Constantly. A few years ago, after my mom (a retired veterinary technician) had cared for the cats while we were out of town for a few days, she declared that this particular cat “wasn’t doing well at all.” We panicked and made a wellness check appointment with our vet. Kevin took her in because I wasn’t convinced I could be level-headed enough to hear what Dr. Arora would have to say or make the right decisions for the cat. The verdict? “Health-wise, we couldn’t ask for anything more from a cat her age! She’s got at least another five years left in her!” Oh.

It’s great. I mean, I love her. She’s my very first pet. She’s been with me for eighteen years. I want her to live forever. This is all just getting a little exhausting.

Still, we regularly check that she’s breathing, especially if she’s been quiet for an abnormally long time. Like thirty minutes.

Start doing consistent is she still alive? checks. I did one of those this morning. I woke up around 3:30 and she was sleeping on the pillow above my head. I’ll often give her a pat or little cuddle when this happens, but this morning she felt abnormally still. I looked to see if I could see her body move with her breath and my heart started to race. I put my hand on top of her to see if I could detect any of the movement that I couldn’t really see in the darkness. I held my hand there long enough to feel a shot of grief and terror that she had finally left us…until she snapped right out of it and promptly – and probably reasonably – beat the shit out of my hand.

I can’t really begin to touch on the mayhem her age and senility are injecting into this house, but she’s our Grady and we can’t imagine our home without her.

Fun fact: I wrote most of this between 4am and 4:45 because, I mean, who’s going to sleep after thinking their cat had died in the middle of the night?

The joys of cat ownership.