Have you heard of it? Neither had we.

I assume that you haven’t heard of it because that is the only valid excuse you have for not introducing me to it sooner. No, I had to rely on my trusty friend Rachel to do that.

So, there we are a few weeks ago, watching probably the second or so episode of Making It. (Which, if you haven’t see it is also really good. For many reasons including this one:

Making It is artsy and it’s craftsy and it’s a whole lot of fun with hosts Nick Offerman and Amy Poehler and some seriously talented contestants.

We’d ask @DarcyCarden but she’s not a robot.

I didn’t get it, but as it collected likes, I tried to pretend I did. I think I even googled D’Arcy Carden. (<– That’s a great piece on her.)

I had no idea what this meant, but, I mean, people REALLY seemed to like it – even more than the last tweet.

And it was around this point that I knew I needed help. And I knew Rach would be the only one to help me. 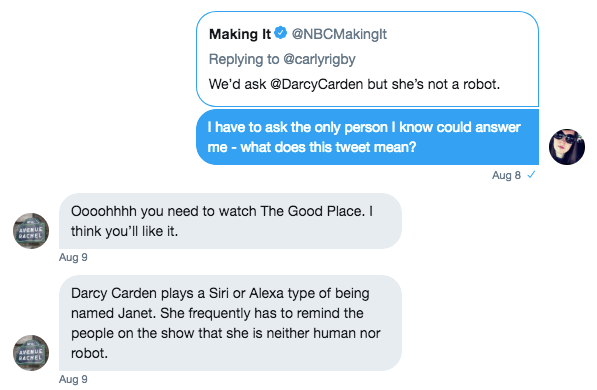 And now I can honestly say that I am so happy that I found out about The Good Place. After just one episode, Kevin and I turned to each other, both smiling and he said, “I can’t remember the last time I enjoyed a show this much.”

It’s so fun and you should totally watch it, too.