The Social debuted earlier this week and, while there have been a few minor changes (new intro, all hosts sharing topic introduction duties), things are basically business as usual in season six.

One of the topics for discussion by the panel this week was online shopping. In particular, it discussed Amazon’s plans to make live Christmas trees available for order online. (I am a hard no on this one because I like to select my tree based on how it looks and they would probably get that way wrong. Also, no live trees in my building.) A couple of the hosts (Melissa and Marci) were pro shop-from-home alternatives – Melissa even said that she hasn’t stepped foot inside a grocery store for six months! Lainey was mostly without an opinion (if you can imagine!) and Cynthia brought an argument that I’d never really contemplated to the table. She shared that, beyond her personal enjoyment of shopping in stores, she has concerns for the social engagement that results from having to go out in the world and interact with the cashier, the salesperson, the barista, the person pumping gas, not to mention the other customers, shoppers, cafe-goers, etc.

Now, I’ll be honest, just reading that list makes me EXHAUSTED. When I have a task that needs to be done, the people that I am going to have to deal with is near the top of my list of concerns. I’m not completely socially adverse, but I do reject society’s current belief that we need to make small talk all the time. I curse the restaurant chains that have instructed their hosts to ask how my day is going and their servers to inquire about my plans for the rest of the evening. Fielding those questions alone makes me want to stay in.

Among all the many, many reasons that I am thankful that Kevin came into my life, I include the fact that he and I are TOTAL opposites in this regard. Just yesterday, while I ran between errands, he stood in the store where he’d bought some pants, making nice with the salespeople while he waited for his pants to be hemmed. I absolutely, 100% would have left if only to not have to stand there and chit chat. But he often comes home with stories that begin, “so, I was talking to <insert random person’s position here>…” The receptionist at an appointment, a person in the elevator, the pet store clerk. You get my drift. Me, I would pay money to avoid those interactions, but I don’t necessarily think that’s a good thing. And I’m not proud of it.

Technology and development has made it possible for me to relish my loner tendencies, upgrading my prefers not to deal with others to won’t status. Kevin handles nearly every household chore that involves collaborating – or even talking, if I’m honest – with someone else. That includes food delivery, phone calls, returns, maintenance issues. If pushed, I can do it, but I certainly don’t volunteer.

I know that loneliness is an epidemic. This piece in The Economist sums it up with recent statistics. It breaks my heart to know that an increasing number of human beings in this world feel neglected. I want everyone to have social networks that satisfy their need to feel loved and valued. What challenges me is that my personality, quite simply, doesn’t line up with providing that to others. I try to be supportive to the people that I am with and who are in my life, but it’s self-preservation for me to retreat into quiet, private, solitary time. I see the need to connect in others, but sometimes I need to let my need to disconnect prevail. I like the idea of growing and developing community, but in reality, it’s the biggest challenge in my life.

And, of course, the inevitable question arises: if I don’t do it, who will?

Before I went to France, people warned me that the French were rude. It’s a common enough belief that there probably isn’t a resident of the western world who hasn’t already heard it. Thing is, after being there, I didn’t find that at all and I came back telling anyone who asked that it wasn’t that they were rude, it was just that they don’t care about your story. In my experience, the French were kind and thoughtful and very interactive, but they weren’t interested in me in the coddly kind of way that North Americans are used to. We could exchange a smile and execute a transaction and none of it had to do with how anyone is doing or what’s going on in their life outside of that moment. It was a breath of fresh air for me, but I guess that translates as rude in this day and age. Ugh.

This morning, my thoughts came flooding back when I read through Chrissy aka The Hungary Buddha Eats the World‘s Sunday Somethings post for this week and found this link included in the roundup: The Homebody Economy, Explained. Coincidentally, I literally had the book this article references in my hand yesterday at the library. It was on hold for the person whose last name comes right before mine and when I glanced past it something about it caught my eye.

The synopsis from Goodreads:

A shocking, hilarious and strangely tender novel about a young woman’s experiment in narcotic hibernation, aided and abetted by one of the worst psychiatrists in the annals of literature. Our narrator has many of the advantages of life, on the surface. Young, thin, pretty, a recent Columbia graduate, she lives in an apartment on the Upper East Side of Manhattan paid for, like everything else, by her inheritance. But there is a vacuum at the heart of things, and it isn’t just the loss of her parents in college, or the way her Wall Street boyfriend treats her, or her sadomasochistic relationship with her alleged best friend. It’s the year 2000 in a city aglitter with wealth and possibility; what could be so terribly wrong?

This story of a year spent under the influence of a truly mad combination of drugs, designed to heal us from our alienation from this world, shows us how reasonable, even necessary, that alienation sometimes is. Blackly funny, both merciless and compassionate – dangling its legs over the ledge of 9/11 – this novel is a showcase for the gifts of one of America’s major young writers working at the height of her powers.

She plans to stay inside and sleep for a year. Even for me, someone who celebrates weekends without plans more than any other, this is taking things a little far.

The article that Chrissy shared references companies taking consumables beyond just takeout pizza and home grocery delivery, all the way to booze and cigarettes. I’m all for convenience, but this seems excessive and kind of a recipe for disaster.

Don’t get me wrong, I like to shop online. I do. I detest shopping for clothes in real life – trying things on makes me miserable, I hate talking about it when I do, I get frustrated by the whole process. That said, I’m not super invested in clothing or picky about what I wear. Do I like a cute outfit? Sure. But I could also be completely happy in a uniform lifestyle like this one. (“There’s a group of people that have embraced this way of dressing for years—they call it a suit.”) Household items? I could get on board with that, the only problem being that I’m a classic underbuyer so when I need something, I tend to need it now – or yesterday. I could probably be trained, though. Mattresses? I’m not going to lie, I’ve considered it when I’ve seen those ads on TV, but would I fully commit? Probably not.

And all this doesn’t even begin to address my desire to support local business. That’s another argument (that I have a lot of time for) altogether.

So, yes, I’m firmly on the fence when it comes to online shopping. I like the idea of never leaving the house again, but in reality, I think there’s a delicate balance.

Not gonna lie, though. I do want this shirt. 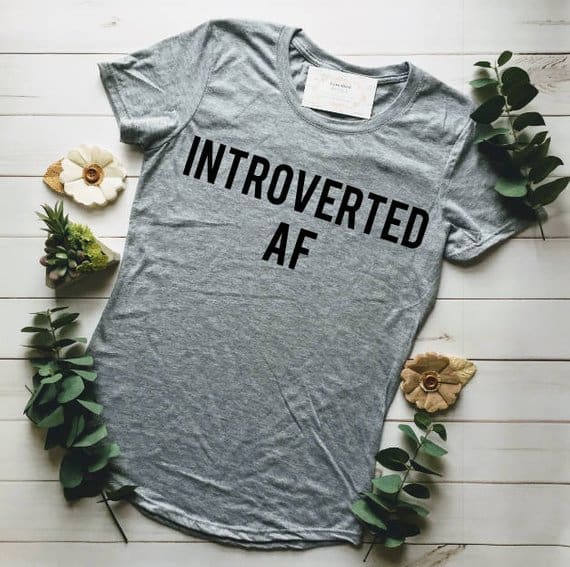 So, what do you think? Is online convenience as great as it seems or will it be the end of us as a species?