Top Posts
23 for 2023: things we’ll do this year
What should I focus on on in 2023?...
Milk Fed
My Happiness Project: February
Be your own historian
Post-vacation blues
Bad habits
Home alone
What’s going on in your community?
Quick turnaround
Home TDTFYH 09.29.18
TDTFYH

Six years ago, I caught a glimpse of my back in the mirror and noticed a mole in the middle of it. I asked Kevin if he thought it looked funny and he took a photo and showed it to me. It didn’t meet any of the ABCDE warning signs, but I couldn’t really shake the feeling that something wasn’t right. I made an appointment to see a doctor with whom I was somewhat familiar. (At the time I’d been without a family doctor for nearly 25 years and I continue to be baffled by those who praise the Canadian healthcare system.) He took a look at it and said he thought it was fine, but to be safe he was referring me to a local dermatologist. I left feeling lighter and went on my merry way. I was contacted by the dermatologist and given an appointment five months in the future, on my grandmother’s birthday, March 27th.

I’m going to fast forward through the details because basically all the same ones will be included in the details of the next part. The only thing I’m going to include here is that Dr. Wong insisted on doing a review with me asking (himself more than anyone) if the process and my case could have been handled better. Together, we found that it likely couldn’t have, but I asked him when he thought it might have started to be a problem and he said he’d guess it had been about six months. Remarkably, when I counted back six months, that date landed about three weeks before my appointment with the referring doctor.

LISTEN TO YOUR BODY!

Coming out of that experience, I was tagged with a requirement to have a check up with the dermatologist every six months for several years and annually for a few years after that. In the check up, I take off all my clothes and he scours my body for moles that look problematic.

Back in May, I was staring down on e my last annual visits before being let off the hook. It was bittersweet, to be honest. The upside is losing the hassle of having to go every year. The downside is losing touch with Dr. Wong. He is truly a gem of a doctor. (If you’re in BC and ever need to see a dermatologist, I strongly recommend you request him.)

The exam went normally until the end when I sat up and he gave me the rundown. Everything looked fine except there was this one mole on the back of my arm. He didn’t like it. He wanted to “put it in a jar.” Dermatological slang, I guess. I’d thought it was going to happen immediately, right there on the spot since that’s what had happened the last time. Instead, he booked me in for two weeks later (he would have done it sooner, but in this case, I was the one with the uncooperative schedule.)

As with the mole on my back, it wasn’t that this mole on the back of my arm displayed any warning signs related to the ABCDE (asymmetry, borders, colour, diameter, evolving) skin safety guidelines that are preached. I have a moderate number of moles on my body and Dr. Wong felt that warning sign was in the fact that the two he has taken off were both different than the others he saw on my body. He judged them not on the standard criteria, but on the fact that they weren’t likely others. 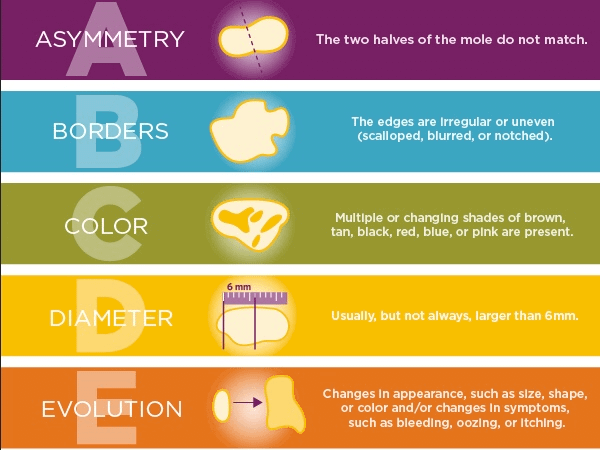 So, into the clinic I went (back) in May. Kevin came with me, though he waited outside. The procedure was scheduled to take 25 minutes and I think it was right on schedule. The clinic is a teaching clinic so it was actually a student performing the surgery that morning which I didn’t balk at because I like being a part of other people’s learning. I won’t get into the gory details, but an incision is made and the doctor cuts around the mole, removing that area of skin. In order to improve the chances of healing without ugly scarring, they cut an incision longer than what they’re taking out then stitch it up. To give you an idea, the pencil eraser sized mole that they took off me regulated in a one inch incision and 13 stitches. Surprising, right?

Once the freezing wears off, it can be a little painful and it is certainly annoying to keep it covered and dressed and avoid snagging it in clothes, but it’s a pretty easy recovery. Stitches out a week later and you’re golden.

Until, that is, the phone rings one day when you’re wandering through Chapters and you recognize the last four digits of the caller because you remember they were the same as your grandparents’ old phone number. You pick up and have this conversation in the actual bathroom because that was where you’d wandered to at that particular moment in time and it’s probably good because it hits you like a ton of bricks. He says they (the BC Cancer Agency screeners) don’t like what they say and while they’re not ready to declare it melanoma (again) they think someone else might. (These are the exact words from the report.) Even having been through it once before (though, that time everyone had agreed it was the real deal), I’d had no idea that a diagnosis was so subjective. I don’t go into zombie mode often, but I did then. And I believe Dr. Wong when he says he felt the same. “Nobody is more surprised by this than me.”

I didn’t tell Kevin right away because we were on our way to a lacrosse game and I didn’t want it to become a thing while we other, more momentary, things to focus on. I spilled the beans as we drove home from the game and shared the new date that I’d made with the doc.

We went back – by this time it was the end of May – and the procedure was the same only this time their take would be bigger. Basically what happens behind the scenes is that the Cancer Agency receives the original sample and runs a biopsy. If the results seem harmless, then the patient is good to go. If the results are suspicious, then an additional surgery needs to be completed to “clear the margins” in the area that was affected. Based on the results, they’ll issue guidelines about the amount of flesh surrounding the piece that was removed. I believe it’s about a centimetre surrounding, but I could be wrong in that. As my mom (who watched the second surgery, the first time around) put it: “you wouldn’t believe the amount they take out – it was the size of an apricot!” This time, it expanded my existing incision to just over two inches and 32 stitches. I have been told a number of times since that I have got a pretty bad ass scar, though.

I’m not going to preach about sun exposure or using sunscreen every day. I’m only going to tell you this: I’ve spent ZERO hours of my life sunbathing and I’m not someone who has ever spent a lot of time in the sun. I don’t particularly enjoy the heat so avoiding it became a habit very early on. If this can happen to me, it can most certainly happen to anyone.

The best analogy for how I treat life’s challenges is like water off a duck’s back. They’re there, I deal with them, I move on. I am not overly dramatic and I don’t seek out attention or sympathy. But there were two moments when the gravity of these situations hit home for me. Both happened in the follow ups to my first experience with melanoma.

Take care of yourself and your skin. xo