Top Posts
23 for 2023: things we’ll do this year
What should I focus on on in 2023?...
Milk Fed
My Happiness Project: February
Be your own historian
Post-vacation blues
Bad habits
Home alone
What’s going on in your community?
Quick turnaround
Home TravelChicago 10.07.18
ChicagoRunningTDTFYHTravel

Like approximately 39999 other people, Lesley was up early again this morning to try to psychically land their wardrobe choices in the right place between cool enough and weatherproof. The weather here in Chicago right now is just so unpredictable!

I saw her off at around 7am and went back to bed for a couple of hours.

By the time I got up and ready, my options to see the racers was pretty limited because I was on the opposite side of the course, separated from the later miles by the early ones. 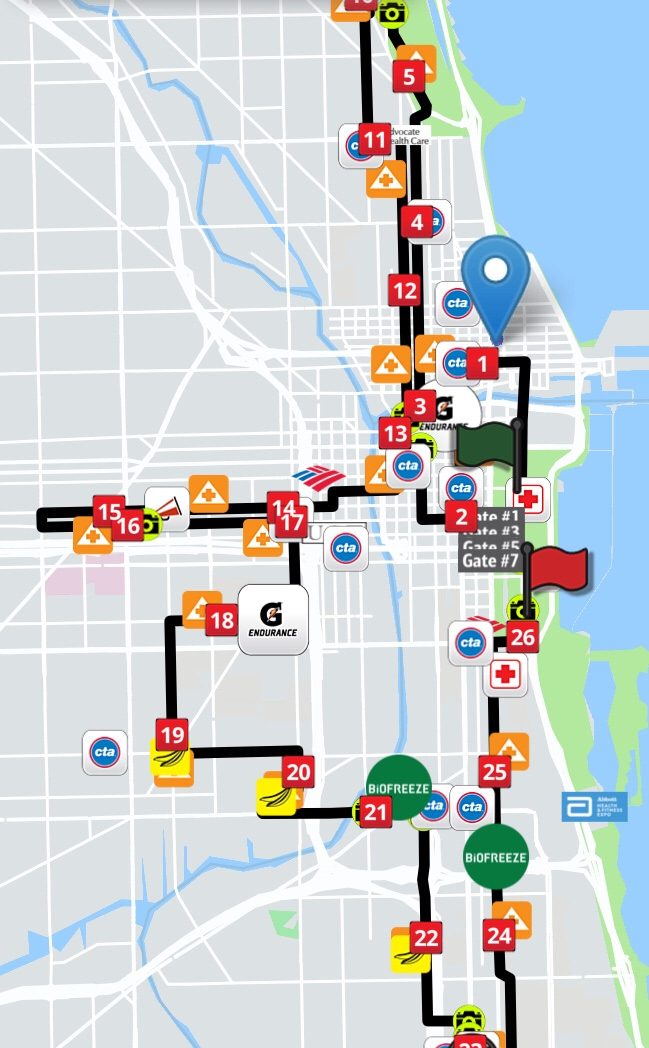 I left the hotel and headed south to the finish line to meet up with my favourite marathoner.

The streets were positively packed with supporters, spectators and runners who’d already finished their race and were heading back to their home bases.

I was familiar with the area I was heading to because of our jaunt through the city on Friday so I found my destination easily. There were huge lineups to get into the Biofreeze 27th Mile Post-Race Party where spectators could reunite with runners so I got into the lineup right away and waited nearly 25 minutes to get in.

I knew enough about her post-race routine to know she wouldn’t be out right away so I didn’t panic when it took a while to find her. Eventually, we reunited and I got a full recap of the race as we walked back to our hotel.

I like both teams – I know the Leafs better because of Kevin’s affiliation which was a plus for them and the Blackhawks didn’t re-sign Tommy Wingels after his 2017 playoff run with them so that was a minus for them. I was basically neutral. (And, yes, I cheered for goals on both sides.)

We got to the United Center early enough that we were able to see the players arrive and walk the red carpet. Among many we didn’t recognize, we were able identify Brandon Saad, Duncan Keith, Corey Crawford, Jonathan Toews, Chris Chelios, Denis Savard and Tony Esposito.

My favourite of the bunch:

We only had to wait a few minutes before doors opened and we were inside the venue.

It’s a nice place, United Center. We took a few loops around the concourse and took some peeks down at the ice and up at the rafters before we headed upstairs to where we were sitting – in literally the last row, the true nosebleeds, in the rafters ourselves.

Once we were in our seats, we stayed there for the duration of the game, although there were several ups and down for people coming in and out of our row and for the TWELVE GOALS that were scored during regulation AND the OT winner. (Leafs won 7-6.)

It was a great game. Back and forth and back and forth. The atmosphere is electric! We even saw three goals within :55 during the last two minutes of the game. (!!)

A few more photos from the game:

That’s a classic Chicago dog in case you were wondering and, no, I didn’t eat it. Lesley, however, did. I had a Perrier.

Before the game started, there was a moving tribute to the late Stan Mikita and I’d be remiss not to mention it. The Blackhawks will wear a 21 patch all season and his name and number will appear on the ice at both ends of the arena.

I posted on my Instagram stories that I just hoped both teams had a fun time tonight, in other words, I didn’t care who won and Kevin pointed out that they probably did since they both scored so many goals. Mission accomplished. And you might like to know that two hats made their way to the ice when John Tavares scored his first hat trick as a Leaf.

Finding a cab after the game was a challenge, but we did it. And we made our way safely back to the hotel to pack, eat our leftover pizza and chat last night of our road trip away.

A truly fun time! Thank you.