The countdown is on: one month until this year’s Rock ‘n’ Roll Half Marathon in Las Vegas aka #StripAtNight. 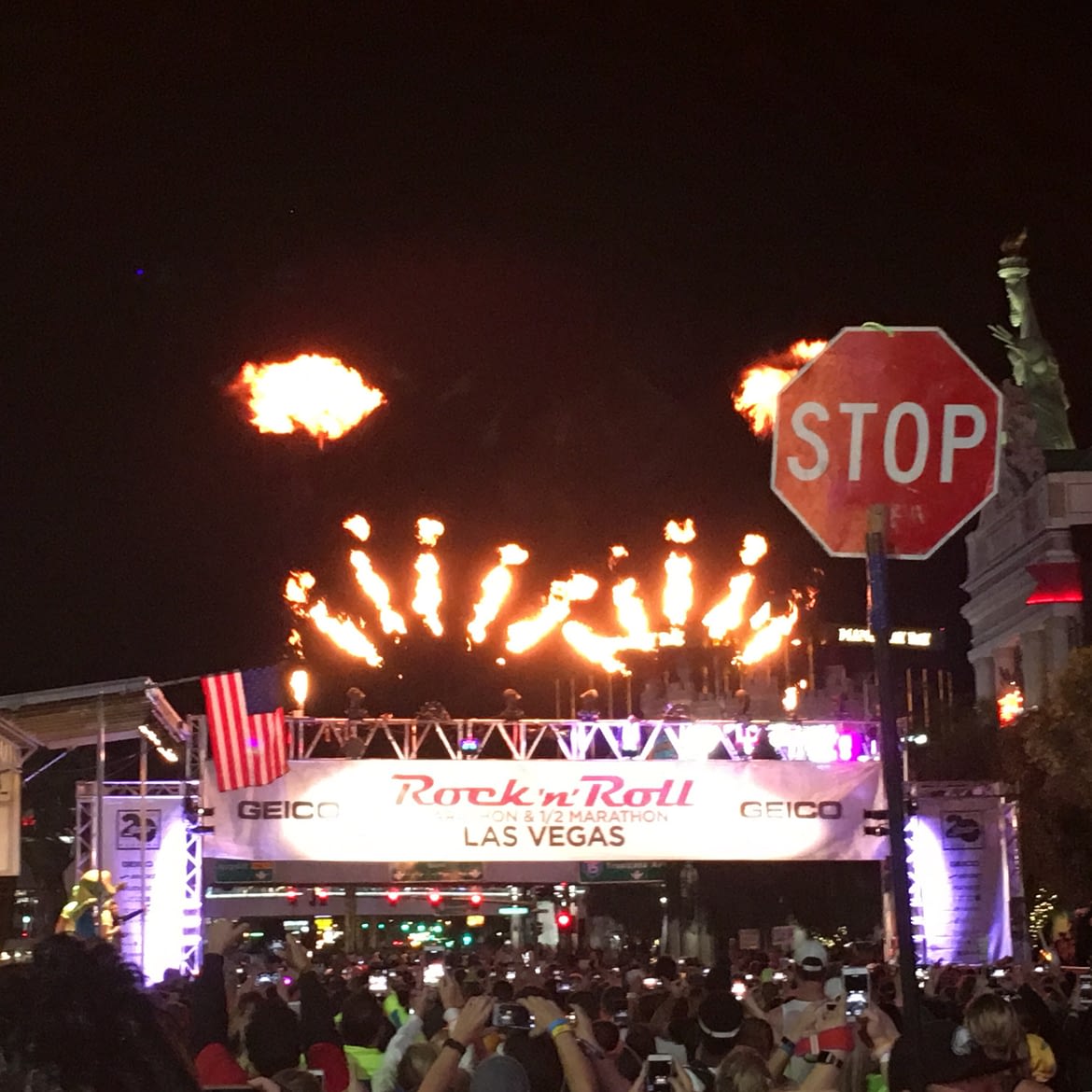 This isn’t our first time doing it, it’s our second. Our first time, our first RnR half marathon, in fact, was last November. I happened to be in town on a work conference during the same week so we took advantage and planned a trip around both.

The nice thing about the Las Vegas versions of Rock ‘n’ Roll races is that they happen at the end of the day. The 5k starts at 6pm and the half and full marathons start at 4:30. I did the 5k last year and it was pretty quick to start, but when Kevin and I did the half, it was 1.5 hours in before we got to start.

We each have very different approaches to running. Kevin is fast out of the gate and I am a long-term planner. He likes to start fast and I like to conserve and finish strong. In spite of our differences, wehad planned to run the race together, but that isn’t exactly how it worked out.

We started together and followed the course south into the desert darkness that was deeper and darker than any darkness I’ve ever known before. Somewhere around the turnaround that brought the course back to the popular span of The Strip, from Mandalay Bay up to Fremont Street, I started to look around for Kevin. I’d lost him. I’d noticed a bank of port-o-potties so I thought perhaps he’d had to use one and I slowed and eventually waited hoping I’d see him as he caught up.

His bucket list for the race was to get our picture taken at the WELCOME TO LAS VEGAS sign which was somewhere around the 4km mark on the course. Because it was so important to him, I waited just about thirty feet before the sign so that we wouldn’t miss the photo op. After about ten minutes, I gave up and carried on with my race.

This was a real struggle for me. I hadn’t pictured running the race without him and having to change up my plan and do so was a mental hurdle I hadn’t anticipated. It made it a lot harder than it would have been. I was so upset at some points that I almost started hyperventilating. I wondered if he was okay, if he’d had an injury, what had happened, where he’d gone, etc. My mind raced, but I carried on and kept moving forward.

Around the 16km mark, I felt a hand on my shoulder and I turned around to see Kevin there. We reunited like lovers separated by war. We were so happy to find one another again! He told me how he’d waited at the sign for ten minutes and how he’d been trying to catch up to me ever since. Since he was trailing me, he’d worked harder than he’d planned and he was gassed by the time he found me. Together, we finished most of the race, though I had a surge over the last two kilometres and we met at the finish. We collected our medals and headed back to our hotel for ice baths and recovery.

Initially, we’d been planning on moving hotels after the race, but thankfully Julie had us covered so that we could hold off until the next morning when I started on my conference.

Kevin actually moved our stuff from Bellagio to Aria and I met him in our new room during the first break from the conference. While I was in there, he was talking about his race the night before and how he’d performed. As he did, something just didn’t seem right. I asked him what time he’d hit the 5k marker, approximately 1km after we’d lost each other and both waited for the other. Sure enough, when we checked, we were about eight minutes different at 5k – except HE had left that much earlier than I had. So the whole time he was chasing me, I was actually trailing him and it’s likely that he finally found me just after I’d finally passed him for the first time.

Thankfully we had a whole lot of fun during the time we did get to spend together. That mostly made up for the confusion and the confusion actually made for a great story.

Now we’re one month away and we’re going back again. I’m contemplating getting Kevin a leash this year. 😉

If I could suggest…a harness with strap might be more humane than a leash – hate to see pictures of Kevin choking b/c of the collar (unless of course he is in to that??!!!) Have fun!