Regret is something I almost never talk about. That isn’t related to shame or embarrassment or even privacy, but mostly my conscious decision to see everything that happens as having a purpose and serving as a lesson. It isn’t that I haven’t been through some challenging and traumatic experiences, I just don’t look back on them with regret, but, instead, gratitude.

We’re at the BC Lacrosse Association Annual General Meeting this weekend, an event that happens every October in Whistler, BC. Representatives from lacrosse organizations around the province gather to attend informational sessions, vote on changes to operating policies and celebrate the year’s accomplishments and victories. 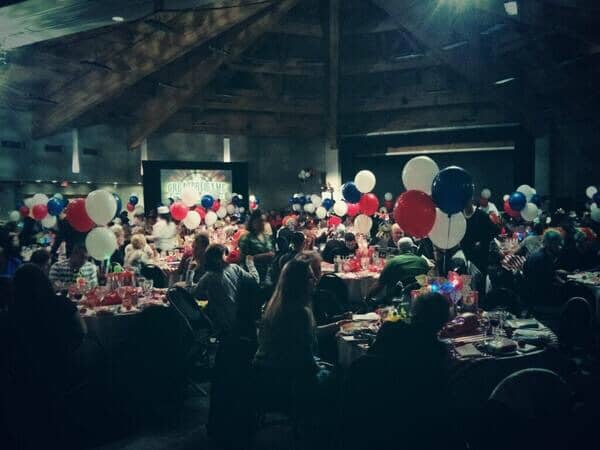 I’ve attended this event as an observer/participant twice in the past, while sitting in several positions related to the Western Lacrosse Association and a number of teams around that league and the BC Junior Lacrosse league. After a couple of years of neither Kevin nor I having any organizational involvement in lacrosse, we are back. He has a role here, I am his guest.

There’s really no way to pick out highlights of the weekend because it’s all so great. The cocktail party is a great way to network and get caught up on what’s going on in lacrosse in BC. Breakfast is always delicious, though it’s EARLY. The awards banquet has a fun theme and the BCLA goes ALL OUT in making it a great celebration. We’ve attended circus and medieval nights and this year’s theme is sock hop. (I didn’t bring a costume and now I regret it.)

Lion tamer Tosh and I went to preschool together!

Last night, we attended the cocktail party and we had a lot of fun. I got to see a number of friends that I’ve made over years of working in this sport myself and being around while Kevin played it. I also got to meet a few people who I’ve known via social media for years, but haven’t met in person before.

Even as early as while we visited the registration desk when we first arrived yesterday, I had started to feel something that was unexpected. I felt wistful, I felt like I was missing something, I felt an emotion like loss. I had no place among this group. For all the work that I’ve done over the years, I am not committed to any one particular cause. Sure, I have an affiliation with the Burnaby Lakers because Kevin is the General Manager there, but I’m little more than a cheerleader these days.

After 27 years, my name is still among the BCLA’s list of volunteers so it feels good to be remembered.
Looping back to my earlier statements about regret, I don’t think that’s necessarily what I’m feeling exactly, but with a couple of years of hindsight, I am feeling sad that I walked away from contributing to this community. At the time, I was exhausted, I felt unsupported and I made decisions based on the actions of bullies who were ruled by their egos and other people who didn’t have the best interest of the game and the people at heart. For a couple of years, I’ve suffered hurt feelings and held some deep animosity towards the people who caused them. I took that out on the sport that has given me so much. I overlooked the people who were supportive and who were working hard for the greater good and those who did value my contribution.

I’m taking this trip as a gift, a sign, reminder after reminder of the community that we’ve built within BC lacrosse and of the reward that comes with contributing to it. It’s time to start giving back again, I just need to decide how.

I want to say a hearty thank you to the BCLA for this great experience and for all the hard work that they pore into making this event so meaningful. Congratulations to all the people who are celebrating awards and accomplishments this weekend. Enjoy the spoils tonight and start working towards the next challenges tomorrow.