Top Posts
23 for 2023: things we’ll do this year
What should I focus on on in 2023?...
Milk Fed
My Happiness Project: February
Be your own historian
Post-vacation blues
Bad habits
Home alone
What’s going on in your community?
Quick turnaround
Home TDTFYH 10.31.18
TDTFYH

Even by my own standards, I have a tendency to take things a little too seriously. Although I think I’m fun in some ways, I’m not really fun in silly or juvenile ways. Dumb jokes aren’t funny to me and cheap humour tends to fall flat. I mention this because it speaks to my somewhat rigid approach to “fun” events: team building stuff, workshop introductions, etc. Sometimes this even stretches to dressing up in costume or theme.

A few years ago, we started attending the BCLA AGM. I mentioned it a few weeks ago when we were in Whistler for the weekend long event. The first day and a half is taken up with meetings and information sessions and voting, but the final and main event is the volunteer awards banquet which is a different theme every year.

Going into it, we weren’t sure what to expect, but we were there with a crowd of extremely enthusiastic participants. Knowing that going in, I allowed myself to get carried away with the spirit of the event and invested in a fortune teller costume to fit the Big Top theme. Kevin wasn’t so quick to get on board and at first said he would NOT dress up. Later on, he gave in and hit up Amazon for a Ringmaster costume that never came. (Like salt in the wound, it was literally sitting on the doorstep when we got back from that trip.) We went to the banquet, we had a great time and Kevin told me that he was really bummed that he didn’t get to join in the costume fun. At the time, I made a mental note about how much fun it was to be a part of the bugger group and vowed to remind myself that when the opportunity arose, I (we) should always choose to dress up. Ever since I’ve thought of it as my own personal addition to Gretchen Rubin’s Secrets of Adulthood.

The following year, in alignment with the Medieval theme, I went as a huntress and Kevin wore a Jon Snow costume. (That dollar store bow actually worked – ask our friend Shawn!) 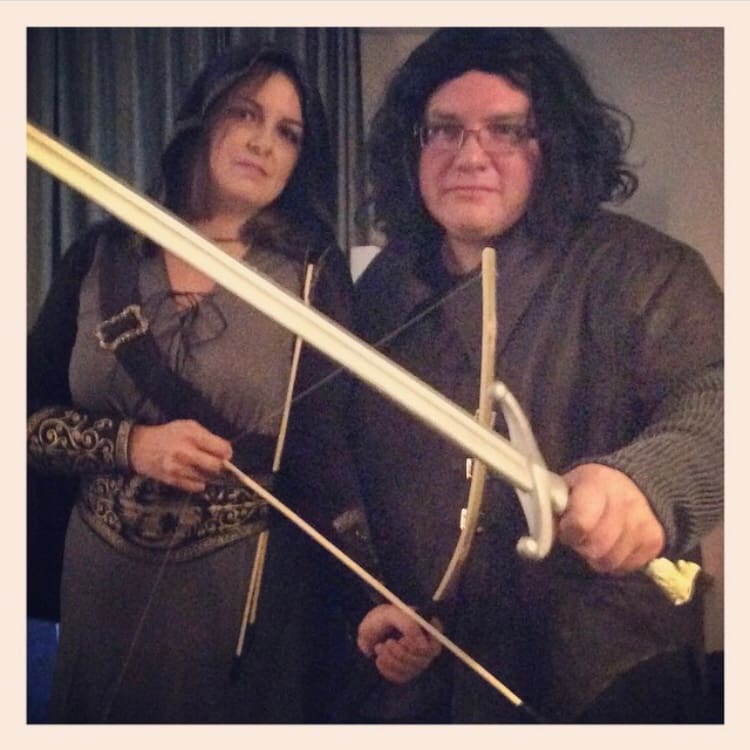 A few years went by and we skipped the weekend entirely. Knowing that we were heading back this fall, I awaiting the theme announcement with anticipation, but I let myself be deterred when it came out that it would be one of my least favourites: Sock Hop. I remember having a 50s themed party in elementary school – I wasn’t into it then, I’m still not into it now. And I let those feelings (and a hectic schedule) get the best of me and bowed out of dressing up. What happened when we got there and the convention centre was decorated top to bottom and women wore silk jackets and poodle skirts, men wore letterman jackets and jeans rolled up way too high? Instant regret. Even though I wasn’t feeling the theme, I still would have had more fun if I’d dressed up.

Last year, Kevin surprised me by announcing, with a decent window time to prepare even, that he wanted to go to the Canucks game on his birthday and that the game would be the Halloween game for the team. I didn’t even know that Halloween games were a thing, to be honest. But I trusted him and we put together costumes, acquired tickets and assembled ourselves early that afternoon. I continued to trust him as we traveled by Skytrain to Rogers Arena without spotting a single other costumed fan on that, the eve of Halloween. In the end, there were plenty of people who were also in costume and we had an absolute BLAST.

But dressing up isn’t fun for everyone.

I was talking to a friend at work about dressing up. He told me he hates it. As a father of a one-year old, he’s struggling to put his feelings aside so that he doesn’t hinder his son’s enjoyment, but he finds it challenging. We dove a little deeper into his feelings and it seems that it makes him really self-conscious. He is both uncomfortable being around people in costumes and he gets anxiety about his own ability to come up with a costume that works. He admitted that a little of that is related to wondering if his costume will be good enough compared to others’. If I’m honest, I totally understood where he was coming from. If I look back at my twenties, I’d probably have to say that I felt those some of those same insecurities, too.

To say that Kevin has embraced Halloween might be an understatement. Like last year, he spent the day at the office in this year’s costume: Cheer Bear of Care Bear fame. When he first mentioned it, I was not a fan, but I have to admit that he really pulled it off and, more importantly, he loved it.

In the evening, we did the one thing that I think will be a staple in Kevin’s birthday celebrations going forward: attending the Canucks Halloween game. Last year it was on his birthday, but this year it was on Halloween.

He spent a half day at the office and then came home for a massage appointment across town. I’d largely ignored one glaring issue with my costume – the hat didn’t have a way to actually attach it to your head. People had made suggestions in the Amazon reviews, but, as I mentioned, I ignored it ALL.

Somehow, but some precise alignment of the stars, I was able to get the hair and hat organized and set in place on the first try. I’m taking this as a sign that I should wear this costume every single single day. (I basically chose the costume because I knew it would be the best dress I’ve ever owned.)

The game was mostly fun, though the crowd got obnoxious towards the end of the third period and that was annoying. Fortunately, we were still riding the high of intermission meet-ups with a couple we hadn’t seen in ages and the fun of all the high fives and banter that come along with wearing costumes.

We had an uneventful ride home and even had some time to enjoy a little leftover birthday cake.