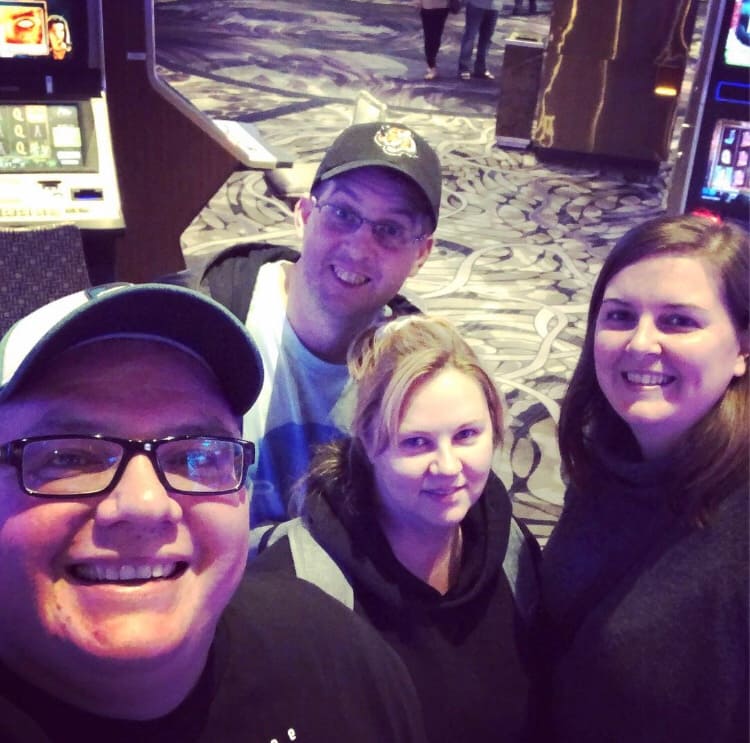 I’ll put it this way: the end of the day was way more fun than the beginning. (But it was all still good.)

Well. Day one was certainly a challenge. As I mentioned, we were stopping for a connection. The only problem? We left Vancouver much later than scheduled but not late enough that we’d miss our flight from Seattle. So, the only thing left to do was grab our stuff and hustle from one terminal down some escalators onto a train up some more escalators and only our flight. That was the point when a woman yelled, “WE’RE CLOSING THE GATE!” when we were clearly aware of that and trying to help the process along. Then she barked at two of the people standing around there, “that’s two of you that can’t go!” Uh, sorry guys.

Our flight to Vegas was pretty smooth and it wasn’t until we got off on the other side that we started to talk about the likelihood that our bags had made the flight with us. And they hadn’t.

To be completely honest, it was kind of nice that they hadn’t because if you can set aside the anxiety of will I ever see my stuff again?!?!? then there is some luxury in having your bags delivered. You just have to come to peace with not knowing when.

Spoiler alert: for us, that was at about 10:30 while we were in the middle of watching the latest (and superb!) episode of You on Lifetime.

I’d love to say we didn’t let this wrench in our plans slow us down, but Kevin was a little rattled and I was totally overdressed so we were, let’s call it aware of the inconvenience. Still, we made the most of the time in between our arrival and that of our bags.

We went for arguably (really, we argued it later) the best pizza in Vegas (the Five50 takeout counter), grabbed some juice from Pressed Juicery and I checked in for my conference.

We made another trip upstairs to our room and then decided to get something to eat for real. My brother and his girlfriend were also in town, their trip overlapped ours by just this one day, and they texted to let us know that they were coming over our way. We headed downstairs to sit in the sports bar lounge which is also, technically, Five50. This time, we opted for hummus, arancini, mac and cheese and shrimp and avocado crostini. All were very good, but the hummus platter looked the best.

We took a little more time to hang out together in the casino before we headed up to bed and the task of figuring out how we’d MacGyver our way through a night without our bags.

And, yes, if you don’t deliver my bags in time, I will sure as shit say yes, I need one of your toiletries bags ESPECIALLY now that I know they’re sponsored by Kiehl’s.